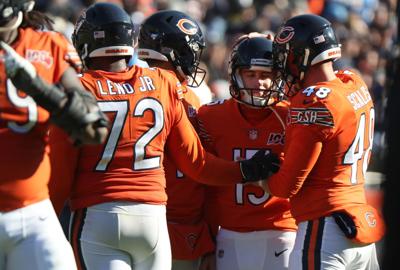 “Field goal, no good.” A phrase heard quite too often in Chicago this past year.

This was perhaps the most silent Soldier Field has been since Cody Parkey’s double-doink in the first round of the NFC playoffs last season.

Another field goal missed, as the Bears’ will to win isn’t only down, but is at an all-time low.

Piñeiro lined up for a 41-yard kick — two yards shorter than Parkey’s last season. Thankfully, Piñeiro’s let down would be less heartbreaking.

It’s sad to look at the glass half-empty, but for the Bears at this point in the season, the water hasn’t even been poured.

Their wins have come at the expense of game-winners, slim margins and lucky chances. Their losses — timely, predicted and faulted entirely by the offense’s poor production.

The struggling Los Angeles Chargers seemed to be a team the Bears could bounce back from, barring a two-game (now three-game) losing streak. Sadly, however, the Chargers’ defense came out on top when it mattered most.

The Bears put together their first 300-plus yard game of the season in Week 8.

If that doesn’t tell you how much a change is needed in the Windy City, then the Bears will continue to tank in the final moments.

It’s hard to put blame on specific people, but when it’s so obvious and so apparent who to point fingers at, the culture not only slips, but causes an avalanche of criticism.

Things to take away from the loss: Trubisky threw for 253 yards, but no touchdowns yet again, with an interception and a fumble — stats pitifully a norm from the second-year quarterback.

Running back David Montgomery put together a strong 100-yard day, scoring a touchdown in the process. The defense was on the field significantly less than in weeks past, as Trubisky was able to keep possession for 38 total minutes.

The run game was dominant in Nagy’s play-calling, as he seemed to make it a point to not look like an “idiot” in front of the hometown crowd ... again.

But that wasn’t the case in the final seconds Sunday.

Trubisky was rolling — completing a few key passes with a nice 11-yard run to put the Bears within 21 yards of scoring. Forty-three seconds left at stoppage, and Nagy called Trubisky to kneel as the clock ticked down to three seconds?

It felt like forever. Fans holding their breath throughout living rooms everywhere. The stadium sat still, watching a heartbreak all too familiar.

It shouldn’t be a surprise of how things turned out in the Windy City.