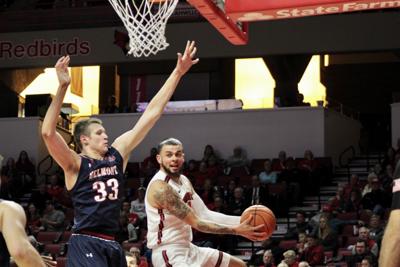 NDSU is still undefeated heading into its final regular-season game this weekend against South Dakota. The Bison’s offense continues to produce and make it easy on the defense, putting up 50 or more points in back-to-back games. MVC Newcomer of the Week running back Jalen Bussey ran wild against WIU in the annual Harvest Bowl game, recording a team-high 173 all-purpose yards in his first collegiate game. Bussey did not even enter the game until the fourth quarter, bursting for a 65-yard touchdown run with his first carry. The young freshman showed off his versatility and big-play potential, with a 50-yard kickoff return and a 45-yard touchdown run on consecutive plays. The Bison may have just found their secret weapon right in time for the FCS playoffs.

South Dakota had a big day on the offensive side of the ball, scoring 56 points in its contest against Youngstown State. Offensive left tackle Alex Jensen showed his leadership and efforts on the line throughout the game, resulting in him winning the MVC Offensive Lineman of the Week award. After playing tight end just a season ago, Jenson helped the team put up 300 or more rushing yards for the second game in a row, averaging eight yards per carry throughout that span. Jenson ended the game with a team-high grade of 94%. MVC Offensive Player of the Week quarterback Austin Simmons was another big reason for the team’s crushing 56-point day. Against the nation’s 22nd-ranked defense, Simmons ended the day with over 200 all-purpose yards and five total touchdowns. This is the fourth time he has thrown for four touchdowns in his career. Simmons has now put himself in third place on the team’s all-time passing list (6,162 yards).

SDSU let one slip away in the fourth quarter against ISU Nov. 9. With an 18-16 lead with a little over two minutes into the fourth, the Jackrabbits fumbled on the kickoff return, giving the Redbirds the ball on their own 16. Things got even worse for the Jackrabbits, with a dreadful defensive penalty on third and goal from their own 3-yard line, resulting in an ISU touchdown. On its next offensive drive, SDSU was strip-sacked by the Redbirds defense, resulting in an ISU field goal. The woes kept on coming for the team, with backup kicker Cole Frahm missing a 35-yard kick late in the game to make it close. Mistakes like these make it nearly impossible to win a football game, especially against a top-ranked team like the Redbirds. Dropping from No. 4 to No. 8 in the polls, SDSU has put itself in a highly anticipated, must-win game against UNI (7) this weekend.

Evansville shocked the world Nov. 12, upsetting the No. 1 Kentucky Wildcats in their first-ever matchup. The Wildcats were on a 39-game winning streak against unranked, non-conference opponents when ranked No. 1 before the loss. The players returned to the university later that night to a crowd full of students and fans, ecstatic for the team’s historic victory. The Wildcats’ head coach John Calipari even went as far as to praise the Purple Aces for their efforts and execution throughout, resulting in a deserving, hard-fought win. The victory was not just a defining moment for the players of Evansville, but for head coach Walter McCarty as well. McCarty played for the Kentucky Wildcats in college and was a member of their 1996 National Championship team. While the Purple Aces will look ahead to their matchup against Indiana University Kokomo Nov. 14, this game will go down as one of the biggest upsets in NCAA history and has brought new life to Evansville basketball for the first time in forever.

ISU’s Zach Copeland was named MVC Player of the Week for the first time in his career, his second MVC award overall. Copeland and the Redbirds opened the season with back-to-back victories over Belmont and Little Rock, bringing their record to a promising 2-0. Through two, Copeland has put up 39 points, six boards, nine assists and five steals, making 56 % of his shots, 42% from three.

The MVC playoffs are underway in Chicago and four teams remain heading into the Semifinals: Missouri State (1), Loyola (2), Bradley (3) and Drake (4).

After an early penalty kick scare, the Bradley Braves shutout Evansville in a 2-0 playoff victory. This was the first three-game sweep of the same opponent in a season in school history. Not only was this a big playoff win, but it was also head coach Jim DeRose’s 250th career win. Forward Gerit Wintermeyer has started to heat up at the perfect time, scoring twice for the second consecutive game. Wintermeyer was honored with the National Player of the Week award, the third player in school history. Wintermeyer leads Bradley as the active career scoring leader and 2019 scoring leader. He sits atop the Braves with seven goals this season, becoming the ninth player in school history with 20 career goals. Wintermeyer has proven to be clutch for the Braves, currently T-6th in career game-winning goals (8).

It took a double-overtime 2-1 comeback victory, but Drake has sent itself to the next round of the tournament. In the freezing cold with winds up to 20 miles per hour, defender Lucas Bartlett curved a kick from 50 yards out to tie up the game in the 87th minute. The game-winner in the 103rd minute was scored by forward Leroy Enzugusi, his team-high eighth goal of the season. Drake will need another miracle against the undefeated Missouri State University Bears for their championship dreams to truly become reality.