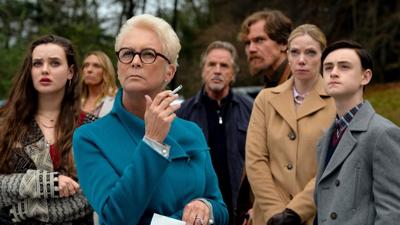 Over the four-week winter break, there was plenty of time to cash in on the time off while catching up on movies. So, I put together a breakdown of all the films I watched over break.

“The Goldfinch” | Ansel Elgort stars as the lead in this film. The story switches between a young Theo Decker and the adult Decker, who has been extremely affected by a bombing that killed his mother when he was a boy. The plot kept me very interested and I thought both Elgort and the young Theo Decker, played by Oakes Fegley, did a fantastic job with their roles.

“The Farewell”  | This film, directed by Lulu Wang, won Awkwafina her first Golden Globe for Actress in a Musical or Comedy. The story follows Awkwafina’s Billi, who knows that her grandmother in China is dying, but her family decides not to tell her, and instead stages a wedding, so they can all see her one last time.

“Star Wars: The Rise of Skywalker” | This movie was fantastic and has become one of my favorite “Star Wars” movies. I loved how they wrapped up this part of the series. Rey and Kylo Ren finally have a conclusion to their story. Also, Finn, Poe and Rey are all back together for a portion of the movie, which I really loved.

“Hustlers” | This movie, directed by Lorene Scafaria, depicts Jennifer Lopez and Constance Wu as the two lead characters. They both portray strippers who begin to act illegally in order to make more money than the club offers them. The performances by the actresses in this movie were very strong. They portrayed independent, powerful women.

“Knives Out” | I saw this movie in the theater and I thought the mystery was very interesting. It did not end how I was expecting it to at all. I thought Ana de Armas was fantastic in one of the lead roles. Daniel Craig and Chris Evans also had standout performances.

“Jumanji: The Next Level” | This is another one I saw in the theater, and although I liked “Jumanji: Welcome to the Jungle” better, I thought this was a strong sequel. Danny DeVito, Danny Glover, and Awkwafina were great additions to this movie. The all-star casts of these movies really make them fun to watch.

“Downton Abbey” | I was a huge fan of this show when it was airing, so I was excited to finally see the movie. Most of the original cast were back to reprise their roles from the television series, so it was really fun to get back into the story. The movie depicts the arrival of the king and queen to Downton Abbey and the drama that comes along with their visit.

“Bombshell” | This movie exceeded my expectations. It is based on true events that transpired at Fox News. Roger Ailes sexually assaulted many of his female employees over his years at Fox. “Bombshell” tells the story of the many victims who bravely came forward to tell their stories.

“6 Underground” | This new Netflix original movie was action packed and had a great cast who played fun characters. It was a great action movie. I loved how the characters all had background stories throughout the movie to make more sense of the main storyline.

“Little Women” | My mom introduced me to this book when I was young, and I have loved the story ever since. We saw the newest adaptation in the theater over break. I absolutely loved it. Greta Gerwig did a fantastic job of directing it. The incredible cast includes Emma Watson, Saoirse Ronan, Eliza Scanlen, Florence Pugh, Laura Dern, Meryl Streep and Timothee Chalamet. I would highly recommend seeing this inspiring movie.

“Judy” | Renee Zellweger won Best Actress in a Drama Motion Picture at the Golden Globes this year for her depiction of Judy Garland in “Judy.” She did incredible acting in this movie. The film shows Judy Garland many years after “The Wizard of Oz,” going on a tour in England, in order to earn more money to support her kids. The last scene of the movie was fantastic.

"A Tree Grows in Brooklyn" by Betty Smith is a classic American novel that I really enjoyed over winter break. The story follows Francie Nolan…