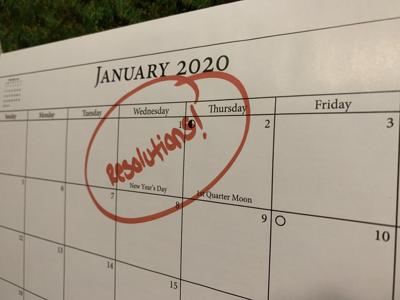 Blinding glitter on Dec. 31 turns into blood, sweat and tears on Jan. 1 as individuals kick off their New Year’s resolutions.

A New Year’s resolution is a tradition most Americans take part in. This tradition fuels individuals to start a new healthy habit, or break a bad one.

Whether one is pursuing a healthier lifestyle by going to the gym, eating more fruits and vegetables or going to bed early, the new year gives a new start to those searching for a more authentic self.

Senior music education major Evan Gallermo said that this can cause stress on individuals with high expectations. Meaning, if one breaks a goal, it’s easy to give up since they broke their resolution so soon. This won’t stop Gallermo from trying his hardest to accomplish his goals.

“I’m not perfect. I’ll break most of my resolutions by next week, but I’ve got goals to be better in 2020 and if I screw up, then I’ll keep pushing on tomorrow until I am better,” Gallermo said.

Gallermo went on to say that he didn’t make new goals specifically because of the new year, but goals he wishes to continue throughout this year and years to come.

Common goals with this new year are weight loss, gaining muscle and spending time in the gym.

Time Magazine mentions in an article that 11% of gym memberships are bought in January. Is this coincidental?

Not looking to bulk up? The gym isn’t the only common goal that Americans have.

CBS42 posted an article with a poll taking into account more than 250,000 Americans and what their 2020 New Year’s resolution goals are.

Some of those goals were being a better version of themselves, staying positive, trying new foods and upgrading their technology.

Does all of the talk about New Year’s resolutions have a positive impact on people? Or could it potentially be a negative factor when some break their goals?

“If someone wants to make steps towards self-improvement, then resolutions are a decent tool for getting it done,” Gallermo said. “If that’s the framework for someone to look in and reflect on themselves, then all the power to them.”

Gallermo went on to say that he personally believes that it is important for people to want to better themselves; regardless of what goal a person has.

Though the new year has passed, it is never too late to pick up a goal. Whether that goal is small or large, daily or monthly, easy or hard, being encouraged to be successful can set the tone for the future.

KACEY NICHOLS is a News Reporter for The Vidette. She can be contacted at vidette_knicho5@ilstu.edu Follower her on Twitter at @Kacey12793516

Never too busy for self care, how to make time for yourself

With the New Year and new start to school, a lot of goals are being made that can impact sle…

How to start classes on a good note

Starting a new semester, especially after ample down time, is always a bit stressful.

It has only been a few days and I’m already questioning how much of a fresh start 2020 is going to be for me.