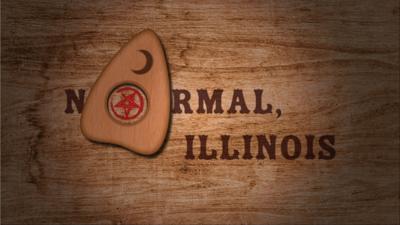 “At the very least, you have to admit there’s something whack going on in a town whose motto is ‘Everything is just as it seems.”’

Jori Johnson, from Bartlett, Illinois, is a senior studying film and TV at New York University. For a class last semester, Johnson wrote a pilot episode of a paranormal comedy, set in none other than Normal, Illinois.

But Normal isn’t so normal.

The show, titled “Normal, Illinois,” follows a teenage girl, Greer Gallagher, as her family moves into a haunted house in town.

“[Gallagher] is repeatedly disturbed by some type of paranormal presence, but nobody will believe her,” Johnson said. “So she has to team up with a couple of the outcast kids at school to try to figure out what’s going on.”

The pilot was one of two chosen to be produced in NYU’s Intermediate Children’s TV Production Workshop during the current spring semester.

“This wasn’t the first time I had pitched something for production class and previous times I hadn’t been selected,” Johnson said. “This is the first chance that I’ve had to make something that I’ve written myself. I’m beyond excited to finally be able to do that.”

Johnson spent her fall semester writing the script in a class called Writing the Half Hour Pilot.

So, why Normal for the setting of the spooky show?

“I thought it would be the perfect town because of the name,” Johnson said. “It’s a little bit of an odd name and it goes well with the paranormal concept.”

Johnson adds that for every script she writes she tries to have the setting be in Illinois, “Because that’s what I know from growing up there. I feel like it’s not a setting that is on TV.”

“I thought it would be the perfect town because of the name. It’s a little bit of an odd name and it goes well with the paranormal concept."

“For inspiration I looked into a lot of history about Normal and images of what it looks like,” Johnson said. “I’ve been trying to incorporate a lot of that into what I just know about growing up in the midwest.”

For as long as she can remember, Johnson has been interested in ghost stories. She adds that for her pilot, ghost hunting shows and sci-fi movies and TV shows were huge inspirations.

“By watching all of that content I kind of realized a lot of what happens in those types of movies and shows [is that] they’re very funny but always played as serious and dramatic.”

“I wanted to explore the area of paranormal comedy where there are some spooky things going on but it’s funny,” Johnson said. “I think that was my main inspiration when writing this script.”

However, due to the current COVID-19 pandemic, production of the pilot is currently on hold. NYU has moved to online classes for the rest of the semester.

“NYU Tisch has assured us that all our production will still happen, we just don’t know when,” Johnson said.

“I will likely have to find a lot of new cast and crew members, as people on the team likely have other plans for summer or fall.”

Filming was going to begin March 28 with the team finishing the pilot April 19.

The production process is a long one, even before having to be postponed.

To begin with, the team went through a series of casting and auditions and then began rehearsals with the selected cast members. Then Johnson worked with the photographer and director making a shot list for each scene and making sure they had all the necessary equipment.

After the show would be filmed, would come a period of post production. This includes editing, sound designing, manipulating the color of the picture and more.

“[Throughout this] I’ve learned a lot about the creative process [and] a lot about leadership,” Johnson said. “In this class where we’re making the pilot I’m like the showrunner and everyone else in this class is dedicating their time to work on my project which is really cool.”

“It’s face-paced work,” Johnson said. “[Last semester one] of my friends was making the pilot that she wrote and I served as the producer of that project. It gave me a crash course of everything I need to do before production starts and how production will go.”

But no crash course could have prepared her for the postponement of the production until further notice.

“Despite the challenges ahead, I intend to see this production through in whatever way possible,” Johnson said.

Whenever the pilot will be produced, Johnson hopes to submit the work to film festivals and potentially pitching the script to production companies as well.

“Despite the challenges ahead, I intend to see this production through in whatever way possible."

“I think that everybody loves a fun, spooky story. I think in particular the pilot isn’t too scary for those who maybe don’t like horror films because there is that comedy element,” Johnson said.

Lions, tigers and Joe Exotic, oh my! With isolation taking over the world, the public has be…

Movies postponed due to COVID-19

The COVID-19 pandemic has delayed the release of a numerous number of movies around the world. Here’s a list of a few notable movies that are …