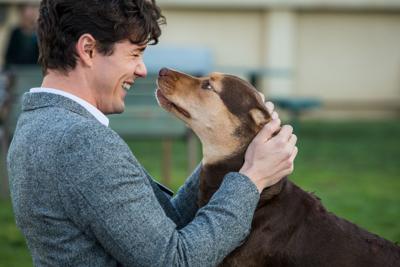 Ratings by the Motion Picture Association of America are: (G) for general audiences; (PG) parental guidance urged because of material possibly unsuitable for children; (PG-13) parents are strongly cautioned to give guidance for attendance of children younger than 13; ® restricted, younger than 17 admitted only with parent or adult guardian; (NC-17) no one 17 and younger admitted.

OPENING IN HOLLYWOOD THIS WEEK

"Against the Clock" _ A former CIA operative investigates after her husband, a CIA recruit, is injured. With Dianna Agron, Andy Garcia, Justin Bartha, James Frain. Written and directed by and co-starring Mark Polish. NR.

"Alone in the Dead of Night" _ A tormented art student faces horrors while at home in her apartment. With Katie O'Hagan. Written by Matty Castano, Kristine Castano. Directed by Matty Castano. (1:35) NR.

"Ashes in the Snow" _ When her family is deported to Siberia by Stalin during WWII, a teenager is sustained by her passion for art. With Bel Powley, Martin Wallstrom. Written by Ben York Jones; based on a novel by Ruta Sepetys. Directed by Marius Markevicius. (1:38) NR.

"Buffalo Boys" _ Two Javanese brothers forced to flee to the American West as children return home to avenge the murder of their father, the sultan. With Yoshi Sudarso, Ario Bayu. Written by Mike Wiluan, Raymond Lee, Rayya Makarim. Directed by Wiluan. In Indonesian and English with English subtitles. (1:42) NR.

"Tall Tales" _ A traveling cricket finds adventure in this animated tale. With the voices of Kate Mara, Justin Long. Written by Antoon Krings, Arnaud Delelande, Christel Gonnard; based on a book by Krings. Directed by Krings, Delelande. (1:28) PG.

"The Upside" _ A paralyzed billionaire hires an ex-con to be his caretaker. With Bryan Cranston, Kevin Hart, Nicole Kidman. Written by Jon Hartmere; based on the 2011 French film "The Intouchables" by Eric Toldedano and Olivier Nakache. Directed by Neil Burger. (2:05) PG-13.

"The Favourite" _ This viciously entertaining period comedy-drama from director Yorgos Lanthimos ("The Lobster") returns us to the 18th century court of Queen Anne (a magnificent Olivia Colman) and the intrigue swirling around two women (Rachel Weisz and Emma Stone) vying for her favor. (J. C.) R Limited

"Happy as Lazzaro" _ Alice Rohrwacher's enchanting, time-bending third feature, about a group of sharecroppers on an Italian tobacco farm, is a deceptively plain-looking portrait of downtrodden lives that by the end all but glows with wonderment and surprise. (J. C.) PG-13 Netflix

"If Beale Street Could Talk" _ Barry Jenkins' follow-up to his Oscar-winning "Moonlight" is a visually and musically gorgeous adaptation of James Baldwin's novel, a 1970s Harlem love story that beautifully mixes past and present, the personal and the political. (J. C.) R Limited

"The Other Side of the Wind" _ Shot between 1970 and 1976 and then left unfinished for decades, Orson Welles' long-awaited final feature is a cracked, corrosive vision, a cinematic hall of mirrors that fascinatingly reflects the fraught circumstances of its making. (J. C.) R Netflix

"Roma" _ An extremely quiet, even meditative picture played at the softer pitch of reality, rather than the higher frequency of drama by writer-director-producer Alfonso Cuaron, whose childhood experiences are the bedrock of this family story. (K. Tu.) R Limited/Netflix

"Spider-Man: Into the Spider-Verse" _ The creative brain trust of Phil Lord and Christopher Miller has thoroughly rejuvenated the Spider-Man myth in this quick-witted, formula-busting and visually gorgeous animated feature, which places a new kid named Miles Morales (voiced by Shameik Moore) behind the mask. (J.C.) PG

Fans of Bryan Cranston, best known for his Emmy-winning portrayal of the depraved Walter Whi…