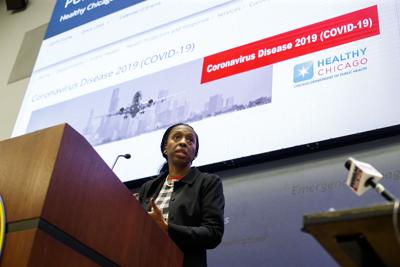 The Illinois Department of Public Health announced 236 new cases of COVID-19 within the state, bringing the total to 1,285 confirmed cases.

Three new deaths in Cook County have been announced, bringing that total to 12 deaths. The individuals include two men in their 80s and a man in his 90s.

“To reduce the rate of spread, we need to reduce the exposures and thus far, the people of Illinois have been doing just that. I thank each of you for all of your responsible actions. This has been done through what has been called social distancing, or more appropriately, physical distancing,” Dr. Ngozi Ezike said.

“When you’re at the grocery store or you’re getting gas, you could still be social and say hello. You can talk with those you see but just maintain that distance of at least 6 feet. We know that simply itching a smile can be a positive interaction that still honors the distancing guideline.”

During this time, Illinois’ innovative biotechnology companies and state of the art manufacturers are coming together with the state of Illinois to help produce more personal protective equipment.

In Gov. JB Pritzker’s daily press conference on Monday, he stated that the alliance will go forward with creating more equipment that is FDA-approved and sterilized for those helping to eliminate the virus.

This includes, but is not limited to, N-95 masks, gloves, gowns, ventilators, sanitizer and facemasks. Many of these companies are repurposing facilities to meet critical demand for necessary equipment.

The Illinois Biotechnology Innovation Organization has played a large role in helping eliminate the virus by launching a COVID-19 response fund that makes direct purchases of protective products.

“We’re trying to protect people’s health and safety, that’s our number one job here. There’s no attempt to limit people’s civil liberties. People can go outside. They can do an awful lot of the same things they were doing before,” Pritzker said.

These decisions and actions follow Pritzker’s multiple requests to the federal government about supplies, funding and donations to local and state governments.

Pritzker claimed that the multiple requests were not fully met by the federal government multiple times over the past few weeks as shipments continuously got smaller.

“I’m an Illinoisan and I’m a governor of Illinois. I am going to do everything that I can to protect our residents and get us through this crisis. I said I’d fight like hell for you and I’m doing that every minute of every hour of every day,” Pritzker said.

“One way or another, we need these supplies. I have a whole team of people whose singular focus right now is working the phones across the world to get as much PPE as possible shipped to Illinois.”

Pritzker strongly urged that he would continue to push through to get the White House to help the nation with this virus no matter what it takes, stressing the importance of being united.

“So as long as I know that there’s action that the White House can take, things like aggressively wielding the Defense Production Act or actually buying and distributing the supplies they say they’re going to buy and distribute, I’ll do everything in my power to make that clear on behalf of the people of this state and the more than 300 million Americans who don’t call Illinois home,” Pritzker said.

How to cope with COVID-19 life changes

With the ever growing pandemic, and its ability to ever change this hopefully short period o…

Eight cases in McLean County, officials say Illinois is in 'ramping up' stage

There are now eight confirmed cases of COVID-19 in McLean County, including the resident who…

The first COVID-19 related death has been reported in McLean County.

The Illinois Department of Health announced 250 new cases of COVID-19 within Illinois March 24, totaling 1,535 cases in 32 counties across the state.