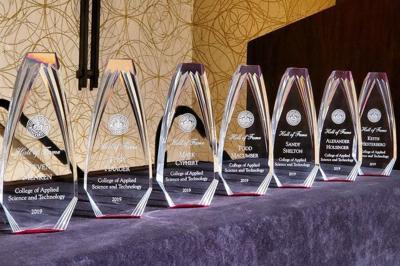 School of Information Technology alumnus Mark Cyphert '81 was recently honored with induction into the College of Applied Science and Technology Hall of Fame Class of 2019.

CAST recognizes some of its most successful alumni through induction into the CAST Hall of Fame each year.

As for Cyphert, he grew up in Central Illinois and the Chicago suburbs. His interest in technology started in high school where he was provided with the opportunity to participate in programming classes through a partnership with a local junior college.

From there, he graduated from Illinois State University in 1981 with a bachelor’s degree in applied computer science and a minor in business.

Cyphert’s career started as a mainframe programmer with Square D Co. followed by him joining Official Airlines Guide, a subsidiary of Dun & Bradstreet.

Over the course of the next six years, Cyphert learned a variety of skills while earning an MBA at Loyola University. In 1988, he joined Touche Ross, now known as Deloitte, and was given countless opportunities throughout time.

After being admitted into the Deloitte partnership in 1998, he served clients in the financial services industry for over 11 years.

Cyphert is currently responsible for a large portion of things and plays an important role in the organization’s mergers and acquisitions business.

Currently, he is a member of the ProEquities, Inc. board and United Way of Central Alabama audit committee.

Cyphert was previously on the Illinois State University School of Information Technology’s Business and Industry Advisory Council and served as president of a private elementary school board.