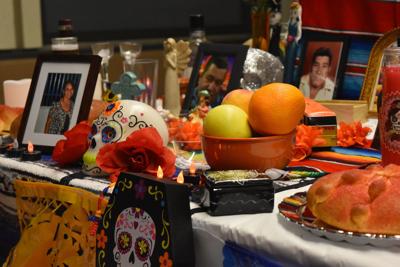 As October is the month for all things spooky, there is still one more celebration to honor before switching out skeleton heads for stuffing and stockings.

Alongside the celebration of Halloween some may also be celebrating the Latin tradition, “Día de Los Muertos,” also referred to as “Day of the Dead.”

El Dia de Los Muertos is celebrated all throughout Latin America and places within the United States where Latin culture thrives. This year, the Illinois State University community will also have an opportunity to experience a taste of the Latin celebration as a university organization has put together an event.

ISU’s University Program Board will be holding a day of celebration for Día de Los Muertos from 6 p.m. until 9 p.m. Saturday at the Bone Student Center in the Circus Room.

During the event, attendees will have a chance to eat Latin-inspired food along creating their own ofrenda, sugar skulls, and decorating a picture frame.

On an international level, this celebration typically lasts three days beginning on Oct. 31 and ending on Nov. 2. During these days, families will participate in a multitude of different activities that have been engrained into the Latin culture for hundreds of years.

With its roots stemming as far back as the early 1300s, during the time of the Aztec Empire in Mexico, the celebration serves as a link between the living and the dead. The Aztecs viewed mourning the death of a person as a disrespectful gesture to the dead, so they decided it would be better suited to instead celebrate their life.

According to the tradition, at midnight on Día de Los Muertos, the line between the world of the dead and the world of the living is said to disappear, and the souls of the deceased rise from their graves to cross into our world to feast, drink, dance and play music with their loved ones. Loved ones of the deceased treat the dead as honored guests and leave favorite foods or other offerings at the gravesites.

Another part of the Día de Los Muertos festivities includes dressing up in elegant clothing. This includes females dressing in Victorian style dresses and painting their faces to resemble a skull in honor of “La Calavera Catrina” who is Mexico’s depiction of the native Aztec’s Goddess of Death.

Though this Latin celebration is around the same time as Halloween, it is not similar in the way they are celebrated. Both holidays are often placed in the same category, as some people may not know the significance of the Day of the Dead. Día de Los Muertos is not "Mexican Halloween," rather it is a celebration of loved ones who have passed.