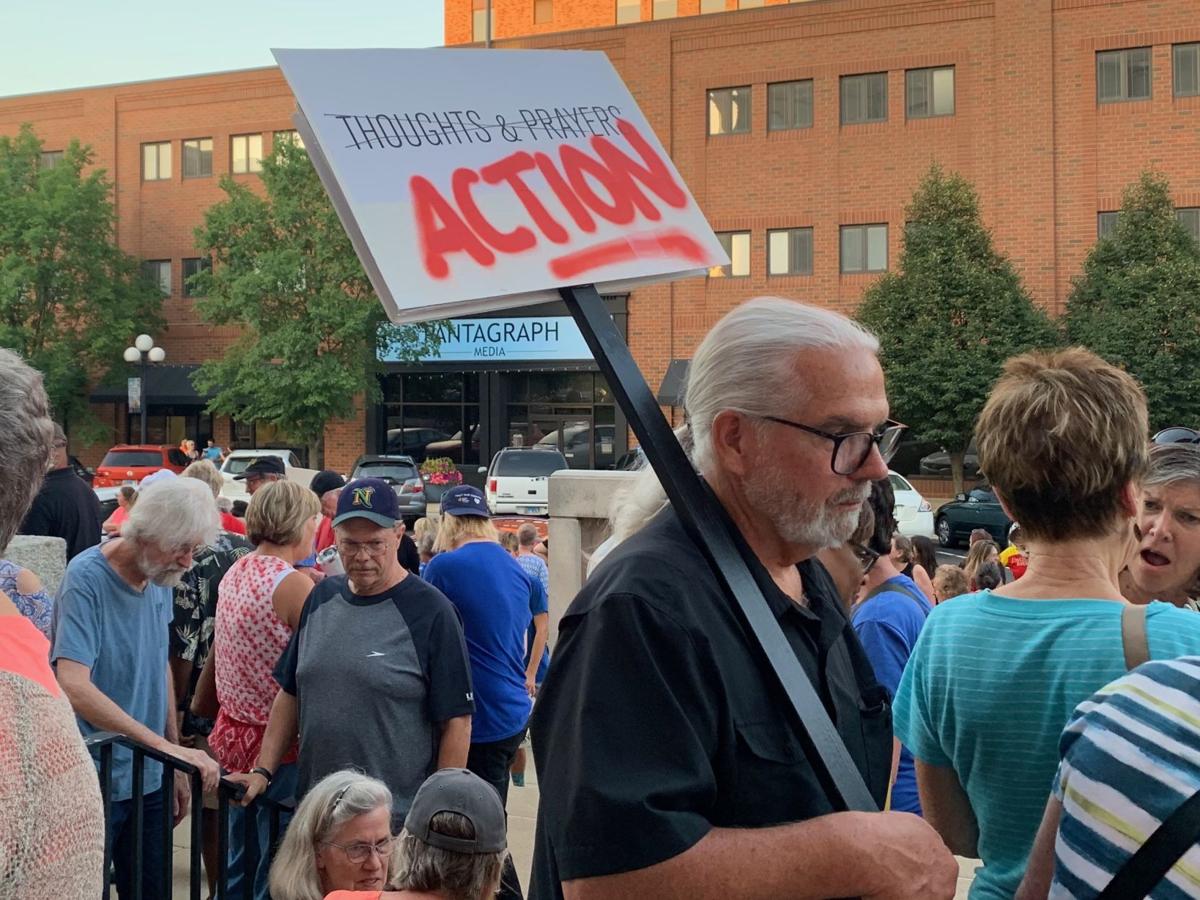 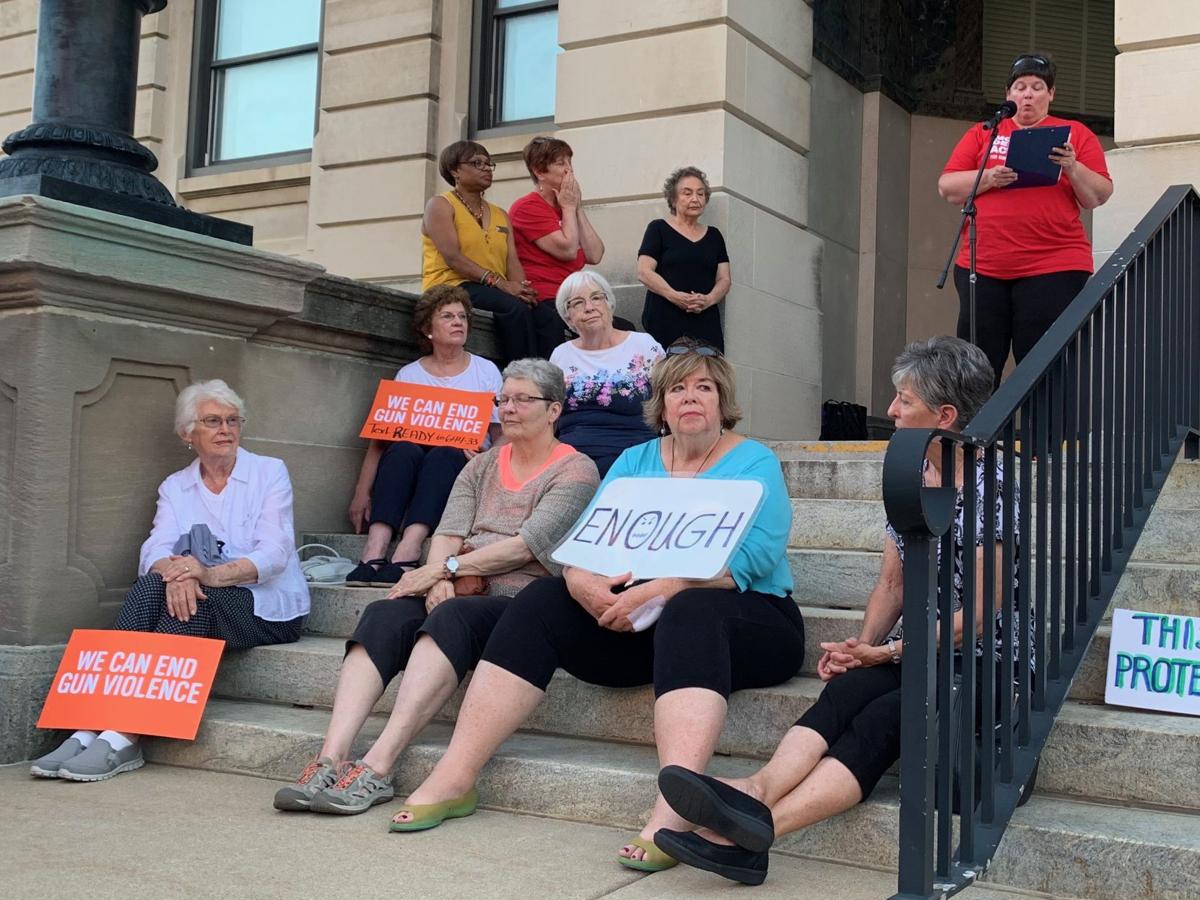 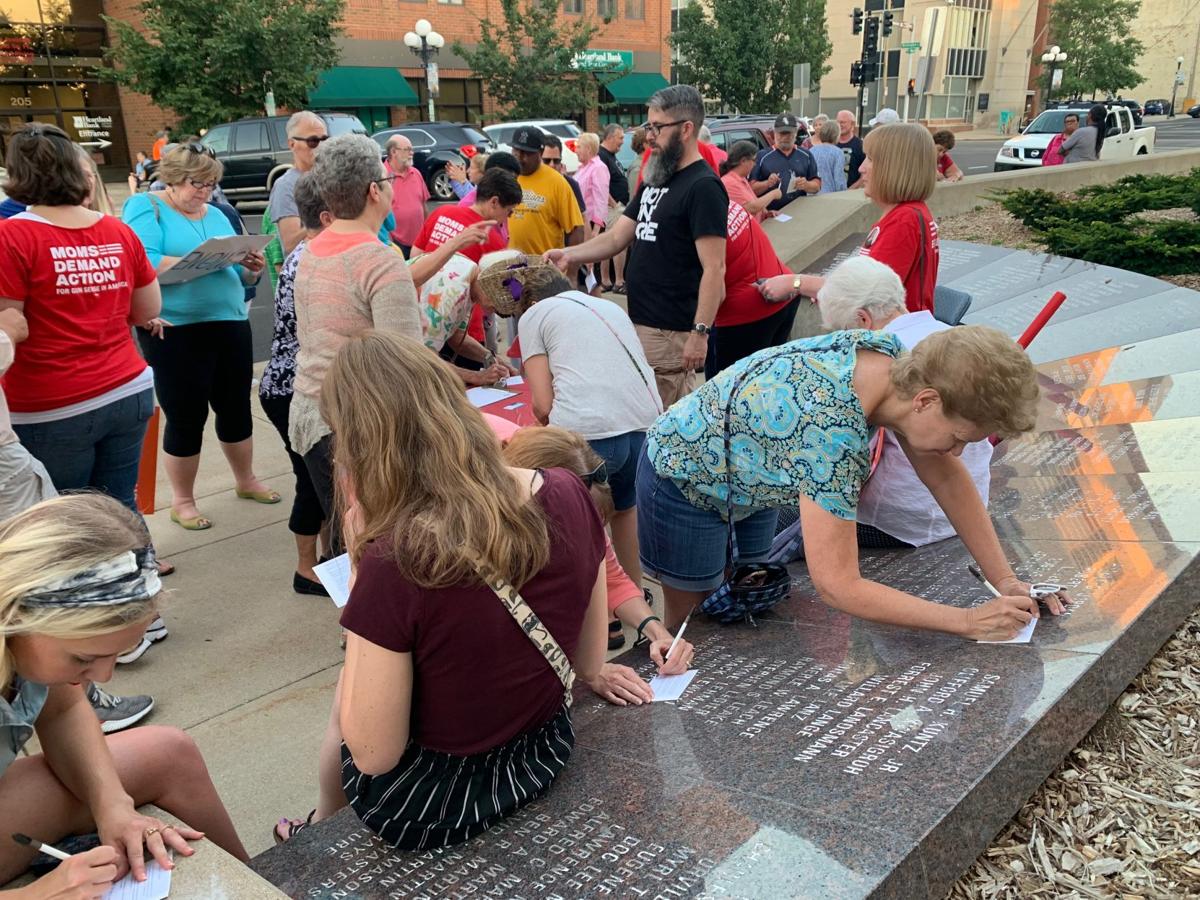 That single word united over 100 community members that gathered at the McLean County History Museum Wednesday night for a rally to end gun violence.

Moms Demand Action on Gun Sense called for the rally in response to the recent mass shootings in El Paso, Texas, and Dayton, Ohio, over the weekend.

Moms Demand Action is a grassroots movement of Americans fighting for public safety measures that can protect people from gun violence. The national organization has been around since 2012, following the Sandy Hook shootings. But it was the Parkland school shooting in March of 2018 that triggered action locally.

Eight of the some 200 members of the local chapter were in Washington D.C. for a national conference when phones started lighting up and buzzing as news of the first shooting became known.

Sarah Breeden, active member of the local chapter Moms Demand Action, said it was already upsetting that they were in D.C. because of guns in the first place and the shootings only added to the organizations purpose, motivating them to do more.

But it’s not just mass shootings that are cause for concern. Breeden said the group is also concerned with everyday gun violence that is occurring in local communities across the country, Bloomington-Normal specifically.

Among the bowed heads and many posters stood Dameca Kirkwood, who is no stranger to the growing tragedy that guns continue to cause.

In October 2018 her 27-year-old son Trevonte Kirkwood was gunned down in the streets of Bloomington near his home.

“It’s still fresh,” said Kirkwood as she choked back tears that began to swell in her eyes.

“Every time I hear of another death from gun violence, it rips me down to bare minimum,” she said. “This has become an everyday norm … it’s devastating.”

With the early Sunday Dayton shooting marking the 250th mass shooting of the year, Kirkwood is appalled at the fact that gun violence has become a desensitized issue.

“Until current elected officials take action to solve this uniquely American problem, we will cry with you when it happens again,” Breeden said in her address to the crowd that had gathered on the steps of the downtown museum.

And after wiping away their tears, Moms Demand Action will do exactly that – take action.

For Breeden, one of the most alarming statistics of gun violence in America is the fact that at least 100 people are killed by guns every day, and that doesn’t even account for those injured by guns, she added.

The crowd heard from various voices including Bloomington Mayor Tari Renner, president of the local NAACP Linda Foster and a local immigrant who is now an American citizen. Each provided a unique perspective, but they all had one goal in common.

“No more,” members of the crowd echoed back, raising their posters a little higher over their heads.

Patsy Hohesisel, a mother of three, traveled from Hudson to attend the rally. She is horrified by the continual gun violence and joined Moms Demand Action following the rally to become more educated on the reality of the situation.

“I want to do what I can to help keep my kids safe,” Hohesisel said.

“But this is just the beginning,” said Breeden. “We don’t plan to stop.”

Seils: Gun violence continues to be ‘only a matter of time’

Statistically speaking, it’s only a matter of time.

Picture this, a 13-year-old gets a video game for their birthday. Does it matter whether that game is “Call of Duty” or “Stardew Valley”?