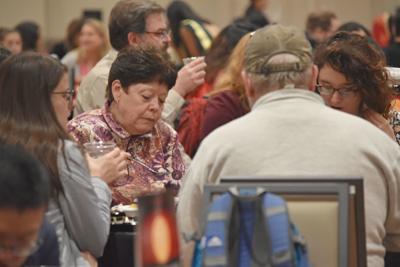 This event was created to give members of the Redbird community a chance to learn more about different cultures, according to the United International Association President Kamya Monga.

This event has been a long running tradition at Illinois State University, with every year having different plans for presentations from different RSOs. This year was filled with a large variety of cultural presentations ranging from the Indian, Chinese, Italian, Spanish, and several other cultures.

Some of the organizations that were a part of the event included the Bangladesh Student Association, Capoeira Club, Chinese International Association, Japanese Language and Culture Club, among others. Each club had an opportunity to give a presentation filled with information about what they are about and even put on a demonstration.

One of the demonstrations that was given by the Chinese International Association included a musical performance. The song was named “Relief," as sung by CIA member Jinzhe “Jack” Zhang. The songwriter intended for it to give the listener a feeling of encouragement for themselves and others.

Another performance was from the Japanese Language and Culture Club by their Vice President Ken Takemodo and fellow Public Relation Officer Duncan Losacco. Both members performed what is known as the Japanese martial art of Kendo. During the Kendo demonstration Takemodo showed the audience four different strikes that are commonly used during training.

“Kendo is a Japanese Martial Arts that was used to long ago to build better swordsmanship,” Takemodo said during his demonstration.

"The Japanese club wanted to do this and since I personally do kendo, I took it on...we really wanted to demonstrate this since everyone likes Samurai so we thought it would be great,” he said.

The Indian Student Association performed their native dance that included a mix of different styles. One dance was known as the Bhangra dance with its origin being from Majha region of Punjab and another dance being more of a Bollywood mash up, with its influence coming from different regions of India like Maharashtra, Rajasthan, Gujarat, and Northern India.

By the end of the event ten different organizations had an opportunity to showcase what they are about to the audience. The next event held by the United International Association will be an International Fair in the spring semester.

ISU looks INTO the future as it expands international student program