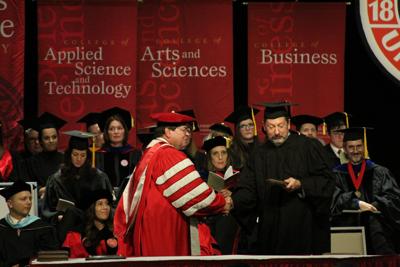 While Illinois State University was founded on Feb. 18, 1857, its annual Founders Day event wasn’t celebrated until over 50 years later.

First held in 1909 but not established until 1913, Founders Day is a time to reflect upon the university’s accomplishments and its vision for the future.

It’s a day to honor faculty, staff members and students with many of them receiving awards, including the Honorary Degree Investiture.

Here’s a breakdown of this year’s schedule:

ISU faculty and staff are invited to the Faculty/Staff Appreciation Luncheon from 11:30 a.m. to 1 p.m. Wednesday in the Brown Ballroom of the Bone Student Center.

Years of Service honorees as well as Civil Service and Administrative/Professional scholarship recipients will be recognized and can later pick up their gifts from Human Resources.

Registration is not required, but a faculty/staff ID must be presented at the door.

From 8-10 a.m. Thursday at the Marriott Hotel and Conference Center, the Loyalty Circle Breakfast will take place.

Donors are invited to enjoy a reception with light refreshments prior to the Bell Ringing Ceremony.

The Founders Day Bell Ringing Ceremony will be at 10 a.m. Thursday in the Brown Ballroom of the Bone Student Center.

By the 1930s, rotting wooden supports couldn’t handle the weight of the Old Main Bell and the building’s dome. Despite efforts to save Old Main, the building was deemed unsalvageable and torn down in 1958, but the bell was preserved and still stands on the Quad near the flagpole.

Today, ringing the replica Old Main Bell on Founders Day provides the campus an opportunity to remember its rich heritage as the oldest public university in the state of Illinois.

This year’s Honorary Degree recipient is alumnus Andrew Purnell ’57 who was inducted into Iota Lambda Sigma, an honorary fraternity, and served on the advisory boards for his class as a junior and senior.

Due to “unforeseen circumstances,” Purnell will be unable to attend the Founders Day investiture. Purnell’s degree will be awarded next year.

Membership has risen to nearly 300 and more than $280,000 has been raised to provide black students with scholarships. Purnell has served on the University’s Alumni Association Board and various campus committees. He has been inducted into the Steve and Sandi Adams Legacy Hall of Fame and received the Alumni Association Mercier Outstanding Service Award.

The Alumni Awards dinner will be 6 p.m. Thursday in Hancock Stadium Club Room.

Established in 1971 with one award, the program has grown to five award categories to better recognize the accomplishments of alumni at different stages of their careers.

Recipients are individuals who personify the university’s tradition as an environment for excellence. Through outstanding achievements and contributions, these individuals bring honor to Illinois State and the Alumni Association.

KOURTNEY CUNNINGHAM is a Features Reporter for The Vidette. She can be reached at klcunn1@ilstu.edu. Follow her on Twitter at @NewsKourtney

Due to “unforeseen circumstances,” honorary doctorate recipient Andrew Purnell will be unabl…