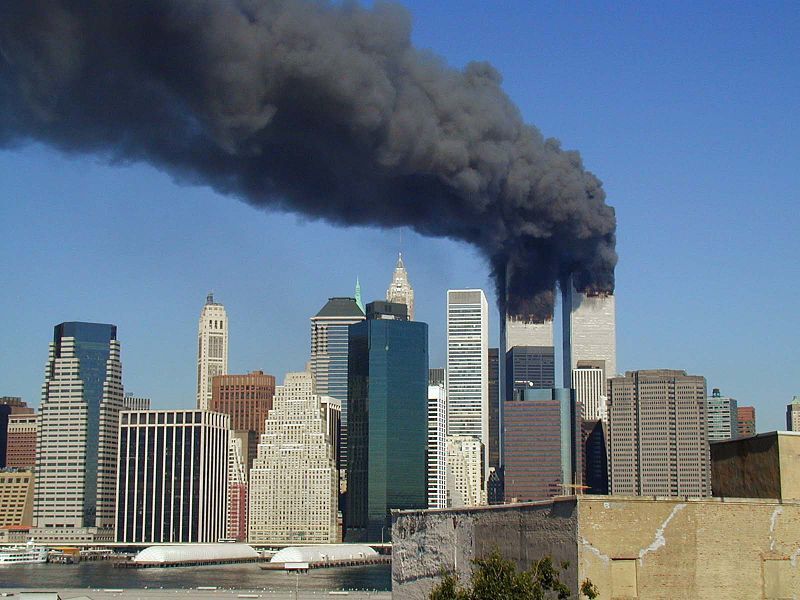 Smoke billows from the World Trade Center towers in Lower Manhattan after terrorists struck each tower during the September 11 attacks.

Renata Macedo from Brazil runs her fingers over an American flag with the names of all the people who died at the World Trade Center during the attacks on 9/11 in 2003.

One of the most tragic events in history was the day of Sept. 11, 2001. It has impacted many lives and changed people's thoughts and views on the world. This day will always be remembered as shocking and terrifying.

The attacks on the World Trade Center were a trigger for United States military intervention in Afghanistan and Iraq. The U.S. intervention in Afghanistan rapidly went from anti-terrorist operation focused on destroying the group that initiated the attacks to a nation-building effort to create a new Afghan government that was installed by the United States. Almost 20 years after the U.S. intervention, serious peace talks finally began in the country.

“The U.S. intervention into Iraq led to an overthrow of the existing government and prolonged violence between sectarian groups, with U.S. forces again involved in the fighting in order to prop up the new government installed after the U.S. invasion. Overall, the U.S. intervention contributed to growing instability in the Middle East and an intensification of conflict between Sunni and Shiite factions and powers, including especially Saudi Arabia and Iran,” History Department Chair Ross Kennedy said.

The focus of the United States and U.S. leaders on terrorism and on the wars in Afghanistan and Iraq shifted tremendously away from much more important issues in the long run. For example, the U.S. started to drift away from the focus of climate change and U.S.-China relations.

“The 9/11 attacks, in short, seriously deranged U.S. foreign policy, with profound consequences for the Middle East and for our ability to address other international problems,” Kennedy said.

The business world was impacted by the 9/11 attacks significantly.

“For exporters, the cost and time of shipping goods increased, due to increased border regulations on how goods were packed, charges for government searches of shipments, and penalties to the exporter if goods were delivered late,” Business Department Chair Horace Melton said.

“9/11 had the immediate near-term impact of slowing down the movement of goods in the international supply chain. But those challenges were quickly overcome and the pace of globalization of business continued.”

To consumers, the most known change has been in travel though airports. There are now long lines at check-in and travelers are no longer provided direct access to walk from the airport entrance to the plane departure gate.

Consumers also had to deal with an increase in transaction costs when having to plan to allow more time when traveling from larger airports.

It took nearly four years after 9/11 for consumer travel to match the passenger volume that was before 9/11.

“The lesson of 9/11 to me as an educator, is that as a business professional you must always be agile, adaptable and, as best as possible, ready to deal with any emergency that comes your way in order to continue to achieve the goals you’ve set and pursue the mission of your business organization. We are learning that same lesson again in the current pandemic,” Melton said.

Illinois State University professors took some time to remember the 9/11 attacks and share their thoughts and what they remember from that day.

“So, I am driving to Champaign and putting pieces together. By the time I get there, I have a general idea of what is happening. I get to class, and it is clear, we are not going to be talking about linguistics today.”

Anthropology Professor James Stanlaw has a clear remembrance of that day. He was filling up his car with gas at the BP station, currently occupied by Tony’s Tacos, and had to drive to the University of Illinois because he was teaching a graduate seminar in bilingualism at the time.

He was trying to organize his thoughts for his seminar, and that is when he heard the radio saying that there appears to be another strike and explosion.

“So, I am driving to Champaign and putting pieces together. By the time I get there, I have a general idea of what is happening. I get to class, and it is clear, we are not going to be talking about linguistics today,” Stanlaw said.

The seminar that Stanlaw was teaching at the time was half international students, and several were from the Middle East. Tensions were high with everything going on, and facts were also unclear.

“People are hearing things from other people, rumors are flying, airports are closed.  National Guard fighter planes are circling the beautiful sunny sky overhead. In some ways, it was like COVID-19 now but with less preparation,” Stanlaw said.

A couple of days later there was a peace rally on campus, and several of the professors gave presentations. Stanlaw’s wife, Nobuko who is also an ISU professor, spoke about Japanese American internment and 9/11 because there were many calls to round up all the Muslims in the country at the time.

Stanlaw, on the other hand, spoke about the necessity of keeping this strictly a criminal investigation and not to do some premature military intervention. As a result, that could have drastic consequences.

“As me being someone who has been sending kids off into the ‘real world’ post 9/11 over the past two decades, honestly, my feelings are mixed. I am pessimistic because in many ways we have learned surprisingly little from the lessons of 9/11. The underlying causes of why 9/11 happened – at least in much of the public’s eye, and the minds of policy makers – are still unclear." Stanlaw said.

Stanlaw went on to speak about the impacts that the individuals involved have played on the current generation regarding terrorism.

“I am not condoning the 9/11 attacks or terrorism of any kind. They are beyond foolish; they are wrong, and misguided, and ultimately hurt their own cause. But I fear that your generation is no more well-prepared to address the ‘whys’ of terrorism, or the ‘reasons’ for the war on terror, than my generation –which has given you this burden,” Stanlaw said.

Sociology Professor Maria Schmeekle expressed her thoughts and how it has impacted her and affected her as a human and as an educator. Schmeekle was a brand-new ISU professor in 2001. She had only been at ISU for three weeks when 9/11 happened.

“I was immediately thinking about how I wanted to handle class and what I wanted to say to the students the next day. I wasn’t sure what the best thing to do was. It was a time of great uncertainty.”

She mentioned that it was kind of dramatic in her life, saying how she barely knew her way around campus from her apartment. It was a non-teaching day when 9/11 occurred. A colleague of hers called to tell her what was going on. Schmeekle explained how she turned on the television and witnessed the second tower come down.

“I was immediately thinking about how I wanted to handle class and what I wanted to say to the students the next day. I wasn’t sure what the best thing to do was. It was a time of great uncertainty,” Schmeekle said.

At the time, she was teaching an American family class where the students were looking into historical issues relating to family, and this was a historical event that affected many families. So, she decided to have her class do some writing and sharing to discuss the situation that was going on.

“In the back of my mind, I was thinking a lot about what I could have done better if I could reflect more on how to handle such a situation. What would I do the next time? Something really came up to the surface for me that has been valuable ever since. This has been that even in the midst of great confusion, chaos, and societal crisis we can tune into our sense of purpose,” Schmeekle said.

Lately, Schmeekle has been thinking about this valuable conclusion. She discussed how there is a lot of anxiety in the students and faculty and in many other people right now because of the COVID-19 pandemic. It is another time when the event of 9/11 came to her mind.

“It reminds me that if we can have a sense of purpose it can give us a sense of direction that is positive as we go through uncharted territory during this time of social norms that are changing,” Schmeekle said.

Schmeekle expressed how the attacks affected her personally as a human as well. She thought that if she could figure out her own purpose then she will have more clarity about what she as a person is doing in the world.

“The purpose that I have come to is that I am here on this planet to be of service and working with students is a good part of that. So, I take a lot of satisfaction and value from doing something that might actually make a little bit of a difference. At the moment, the way that I can make a difference is by helping to empower my students and helping them to become empowered citizens and professionals,” Schmeekle said.

Schmeekle was dismayed to witness the government go into a reactionary stance. The government went into military situations in Afghanistan and Iraq, and she was unhappy that we took that direction.

She voiced that the aftermath of 9/11 was a source of concern for her personally. She had some strong words of wisdom as an educator who is sending kids off on their way into the “real world.”

“Over the years, I have become more and more convinced that one of the skills that we can help students to develop that will serve them in the real world when they get out is the skill to be adaptable to changing circumstances. A lot of times students want certainty. They want everything laid out, and it can’t always be fully laid out because things change. In the real world we will have to adapt,” Schmeekle said.

“If we do not adapt, then we will not succeed in life very well. If you can pivot when circumstances change and accept that you can’t do things the way you have planned, but you can still move forward, then you can adapt to changing circumstances and find your way in an uncertain world. I have increasingly come to realize that this is an important skill that I can help my students and myself cultivate.”

CHELSEA CORA is a News Reporter for The Vidette. She can be contacted at crcora@ilstu.edu. Follow her on Twitter at | @cora_chelsea

Gallery: Remembering 9/11 through pages of The Vidette

To mark the 19th anniversity of the 9/11 terrorist attacks in New York, Washington and Pennsylvania, we revisit pages from The Daily Vidette p…