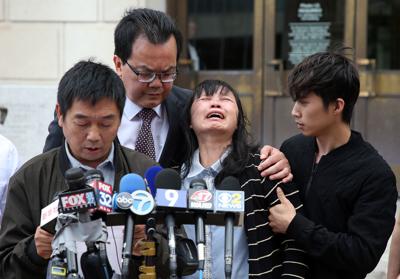 PEORIA -- A federal jury on Monday deliberated for less than two hours before finding Brendt Christensen guilty in the kidnapping and slaying of Chinese scholar Yingying Zhang in 2017.

About the above photograph

Lifeng Ye, second from right, lets out a wail of grief as her husband Ronggao Zhang, left, the father of slain University of Illinois scholar Yingying Zhang, reads a statement to the media outside the U.S. Courthouse in Peoria on Monday, June 24, after a federal jury found Brendt Christensen guilty of kidnapping and murdering Yingying Zhang. Lifeng Ye is consoled by Dr. Kim Tee, second from left, and her son Zhengyang Zhang, right.

The 12-member panel will now be asked to decide whether Christensen, 29, should be sentenced to death for the crime. That process is expected to begin July 8.

Christensen sat expressionless as the verdict was read. He could receive the first death sentence in years in Illinois, which abolished the death penalty in state courts in 2011.

Outside the federal courthouse, Zhang's father, Ronggao Zhang, read a statement in Chinese that was translated into English after the guilty verdict. He thanked the "many people in China, America and across the world who have reached out to us in friendship to support us."

"We have missed Yingying tremendously in the past two years," he said. "As of today, we still could not imagine how we could live the rest of our lives without her. There is no language that can describe our pain and suffering. We hope and believe that this trial will eventually bring justice to Yingying and us. Our wish has always been to find Yingying and bring her home. We will not give up."

Zhang's mother, brother and boyfriend stood with her father outside the courthouse as he read the statement. Zhang's brother consoled his mother as she wailed in grief.

Christensen's father did not say anything to reporters as he left the courthouse Monday.

The verdict came as little surprise as Christensen's attorneys admitted in their opening statement that he killed Zhang, a 26-year-old visiting scholar at the University of Illinois at Urbana-Champaign whose body has not been found.

The jury found Christensen guilty of all three counts against him -- one count of kidnapping resulting in death and two counts of lying to federal agents.

In their closing arguments Monday, Christensen's attorneys described their client as a once happily married and successful student at the university who became consumed with dark thoughts and struggled with alcohol.

But defense attorney Elisabeth Pollock acknowledged that "there's no excuse, there's no justification for what he did. It's not alcohol's fault or another person's fault."

While admitting to Christensen's guilt, defense attorneys took issue with some pieces of prosecutors' case.

Among the evidence the defense tried to counter were some of the comments Christensen made to Bullis after the slaying, when she wore an FBI wire. Those recorded conversations, at times graphic in detail, provided some of the trial's most dramatic moments.

One conversation took place as Christensen and Bullis attended a memorial walk for Zhang a few weeks after her June 9, 2017, disappearance. He told Bullis that Zhang was his 13th victim, for which there is "no evidence whatsoever," Pollock said.

An FBI agent testified during the trial that no evidence has been found linking Christensen to other victims.

The June 29, 2017, recorded conversation was played in court last week and is one of nine Bullis recorded for the FBI. In it, Christensen described in detail how he sexually assaulted and killed Zhang _ choking her, beating her with a baseball bat, stabbing her and ultimately decapitating her.

Christensen saw Zhang as "an object" to fulfill his desire to kill for the sake of killing, Miller said.

Footage captured by a camera at a parking garage showed a black Saturn Astra pull up next to Zhang, who had just missed a bus. Prosecutors said Christensen posed as an undercover police officer, which he had done earlier that day when asking another young woman, Emily Hogan, to get into his car.

Hogan didn't get into the car, called the police and made a Facebook post about the encounter to warn others, prosecutors said.

Later that day, Zhang, on her way to view a new apartment, did get into the car.

"It's chilling to think about the fear and panic she must have felt in that car when she realized he wasn't a police officer, he wasn't taking her (where she wanted to go) and she was locked in that car," Miller said.

Jurors heard testimony over eight days from Christensen's former girlfriend, ex-wife, FBI agents and analysts, Zhang's fiance and her professor. Jurors also saw text messages between Christensen and his then-girlfriend, and saw his interviews with law enforcement. Christensen did not testify.

Testimony is expected to come from Zhang's family during the penalty phase of the trial but it's unclear which of them will testify.

While the death penalty was abolished in Illinois state courts, it remains a tool for federal prosecutors. But its use in federal courts remains rare.

The last person to be sentenced to death in a federal courtroom in Illinois was Dr. Ronald Mikos, who was convicted in 2005 in Chicago of murdering a former patient to keep her from testifying against him in a Medicare fraud trial. Federal records show the sentence has yet to be carried out.

U.S. District Judge James Shadid said he expects the sentencing phase to last up to a week and a half.

Attorney Zhidong Wang, who has been working with Zhang's family in the case, issued a statement that said her family has been "traumatized" by her loss and the graphic testimony they heard during the trial.

-- Zhidong Wang, and attorney who has been working with Zhang's family in the case