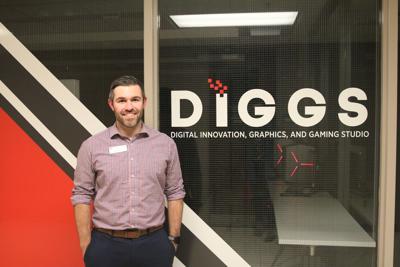 Built with a lifelong passion for gaming and love for Illinois State University, alum David Kirk has been honored with the opportunity to be the leader for the new esports program.

Kirk started his college career at Indiana University to originally become a dentist. During his undergraduate studies, he started to reconsider the direction he wanted to go with his career because of his involvement with campus recreation.

He finished his time at Indiana University with a degree in biochemistry and came to Illinois State in 2014 to complete his master’s degree in recreation administration. From there, his graduate research was centered around the potential engagement that gaming programs could create for college campuses.

“I’ve really always been a gamer. Ever since I was young, it was a way for me to connect with my friends. Also [with] that competition aspect, I was never very big and I was somewhat athletic. [However], my friends who were larger than me were better athletes overall; I was better than them at games, though,” Kirk said.

Coming out of college, Kirk’s experience with gaming and as a student has helped to shape his perspective of esports and what his vision is for the students who join the new program. Before returning to Illinois State, Kirk’s leadership experience with an esports program started at the University of Akron where he served as the assistant director for the past two years.

With the help of other Campus Recreation leaders, his vision for the new Illinois State program goes beyond the typical setting of competitions and the idea of winning. Knowing the misconceptions of gaming and esports has been one of Kirk’s main focuses going into his new leadership position.

One of the biggest misconceptions that Kirk hopes to change is almost every parent’s first thought when they hear the word “esports”: a student spending all day and every day only playing video games and being unsocial.

Another misconception Kirk wants to discuss with the Illinois State campus is the fact that there are students who are interested in gaming but don’t believe that they’ll ever be good enough for the program.

“[Some students] hear esports and they say, 'I’m not good enough.' You don’t have to be good enough and that’s something we’re bringing here to Illinois State,” Kirk said.

Realizing the impact that these misconceptions have on students currently, Kirk plans to utilize this program to provide both opportunities and an environment for students that will steer away from that misconception.

His only hope that he is planning to create with this program is for students to be able to build relationships that they can have both inside and outside the esports facilities.

“I spent roughly 30 hours a week in my dorm room [during my undergraduate] alone, isolated [and] playing games because that’s how I connected with friends at home. I didn’t build a lot of relationships on campus. That’s one of the reasons I’m in this program now, because I don’t want other kids to be like me,” Kirk said.

"I didn’t build a lot of relationships on campus [as a gaming undergrad]. That’s one of the reasons I’m in this program now, because I don’t want other kids to be like me."

Starting in the fall semester of 2020, Illinois State University will be the next school to offer varsity competitive esports.

Picture this, a 13-year-old gets a video game for their birthday. Does it matter whether that game is “Call of Duty” or “Stardew Valley”?