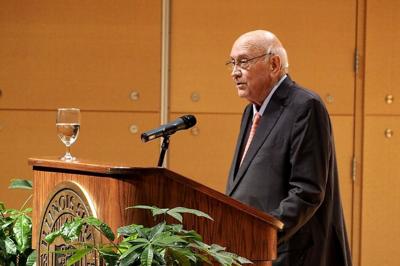 Nobel Peace Prize recipient and former president of South Africa F.W. de Klerk discussed the need for unifying leadership around the globe during a question-and-answer session with Illinois State University students and faculty.

The event was part of the ISU Speaker Series which is free and open to the public. De Klerk presented his keynote speech, “Bridging the Gap: Globalization without Isolation” Tuesday night.

A member of the audience asked de Klerk what had motivated him to release Nelson Mandela from prison.

“Some people call me the last apartheid president, which is not true,” de Klerk said.

“Yes, I led the national party at the time, but I initiated the transition. I, together with Mandela, oversaw the dismantlement of apartheid. When I handed over the presidency to Mandela in 1994, all the major apartheid laws had been scrapped. In a sense, it was the national party that abolished apartheid.

“So, what motivated me? Justice. We abolished the most obnoxious laws. More than 100 apartheid laws had been repealed even before I became president,” he said. “Our isolated cabinet sessions brought deep introspection about where to go with the realization that we had to change fundamentally.”

De Klerk said it was during those informal sessions that he came to the conclusion that the government had to admit to itself that it landed in a place which was unjust and morally indefensible.

“We had to make a 180 degree turn and abandon the concept of separateness and division. We needed to embrace diversity and inclusivity.”

He was asked how the United States government could bring back bipartisanship in a time where leaders and both major political parties refuse to negotiate or compromise.

“I think former president Jefferson and the like would be turning over in their graves. When your constitution was written, it accepted as a departure point not to centralize power in one institution, which was the executive,” he said.

De Klerk said this predisposes the need for negotiation and that the needs of the country are at the heart of things.

“People must rise above their narrower allegiances, take hands and say, ‘On this issue we need a more united approach.’

“In order to define what that united approach should be we should talk to each other and negotiate. America has a wonderful history of bipartisanship solutions being found for serious challenges,” he said.

“If that doesn’t take place, I blame it on the leadership. Not just in the form of a president but also the leadership in Congress.”

"America has a wonderful history of bipartisanship solutions being found for serious challenges."