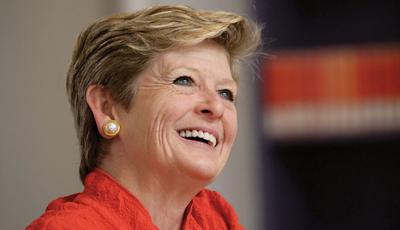 An interim president has been appointed to lead Illinois Wesleyan University through the upcoming academic year.

S. Georgia Nugent has been appointed by the Illinois Wesleyan University Board of Trustees to serve in the post, effective Aug. 15, according to news posted on the IWU website Wednesday.

A national search for IWU’s 20th president will still be conducted by the IWU Board, according to the information posted. The vacancy at IWU was created by the retirement and resignation of Eric R. Jensen in May. According to the IWU post, Nugent will not be considered as a candidate for the presidency on a longer-term basis.

He said he is “delighted” the Nugent will be coming to IWU.

“She has been an inspirational leader and advocate for the liberal arts and private higher education for many years. Furthermore, from our professional interactions over the last decade, I know she has the ideal background and sensitivities to sustain IWU’s momentum during her interim term,” Wilson said.

Meanwhile, Nugent said she was “honored to have been chosen by the trustees. I have already had the opportunity to visit the beautiful Bloomington campus, to meet with a number of wonderful IWU people, and to hear from alumni about the difference this institution made in their lives. IWU is a strong university with, I believe, great potential for continued success. My goal during this academic year will be to work with the campus community to do all that we can to fully realize that potential, so that my successor will come to a campus that is proud of its past and well-positioned for its future.”

Jensen steps down as president of Illinois Wesleyan

Illinois Wesleyan University President Eric R. Jensen has announced his resignation from the…

Before beginning her decade-long presidency at Kenyon, Nugent served at Princeton as assistant to the president, associate provost, and dean of the Center for Teaching and Learning.

She was also a professor of classics at Princeton and Brown universities. She also taught on the classics faculties of Cornell as well as Swarthmore College and Kenyon.

Nugent later served as interim president at The College of Wooster during the 2015-16 academic year and is currently a senior fellow at the Council of Independent Colleges (CIC).

Nugent is a widely published scholar of the classics and of higher education.