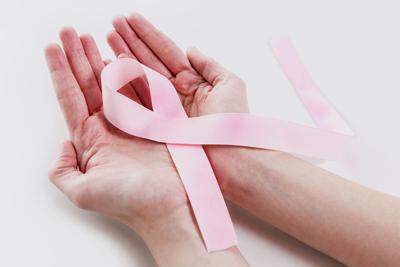 In October, we wear pink. But why?

The color pink and the pink ribbon is the symbol of Breast Cancer Awareness.

Breast cancer is the most common cancer found in women. In fact, one in eight women will be diagnosed at some point in their lifetime.

The month of October, also known as Breast Cancer Awareness Month, is an annual health campaign that is dedicated to spreading awareness through planning charity events, sharing resources and of course, wearing pink.

But just as every person battling any form of cancer has their own story to share, the iconic pink ribbon also has a story.

Many health campaigns similar to this have their own ribbon with a color to coincide with the movement. The merging of ribbon and symbolism first occurred in 1979 by the wife of a hostage who had been taken in Iran during the Gulf War.

The woman decided to “tie a yellow ribbon around the old oak trees” in her front yard. The ribbon was a symbol of her desire to see her husband come home from war.

It was not until the 1990s that this idea was picked up by AIDS activists who revamped the yellow ribbon to fit their own cause. The yellow was made red and took a national stage during the Tony Awards to represent those affected by AIDS.

This same idea was adopted by the Susan G. Komen Breast Cancer Foundation and pink became the campaign’s color of choice. The color pink has been associated with the foundation since its inception in 1982 and used in the organization’s first Komen Race for the Cure.

The Susan G. Komen Foundation is the only organization that addresses breast cancer on multiple fronts. Some of its efforts include research, community health, global outreach and public policy initiatives.

What many may not know about this organization is that it also has some fairly local ties. The hometown of Illinois State's I-74 rival Bradley is where it all started.

Susan Goodman Komen was born on Oct. 31, 1943 in Peoria. Komen was diagnosed with breast cancer at the age of 33 and died of the disease at age 36. After losing her battle to breast cancer, Komen’s younger sister, Nancy Goodman Brinker, promised that she would do everything she could to end breast cancer.

But it was not an easy start.

Talking about breasts has long been taboo. So much that in the early 1950s, The New York Times refused to publish an ad for a breast cancer support group because it included the words “breast” and “cancer.” Few women spoke out about their diagnosis wexcept for a series of prominent public figures, including Shirley Temple Black, in the 1970s.

Even with the odds against her, Brinker stuck to her word and continues to make strides for breast cancer awareness. The organization’s current goal is to reduce the number of breast cancer deaths by 50% in the U.S. by 2026.

In 2019, it is estimated that among women there will be 268,600 new cases of invasive breast cancer which results in 41,760 deaths, according to the foundation.

Did you know that breast cancer doesn’t discriminate against men?

“Men and women both have breasts, so men and women can both get breast cancer. It’s significantly less common in a man because of the way their breasts develop, compared to the way a woman’s breast develops.”

Although rare, with about 1% of men diagnosed, the American Cancer Society estimates about 2,670 men will be diagnosed and 500 men will die from the disease in 2019.

Early detection and prompt treatment are the best strategies for reducing the number of deaths caused by breast cancer, according to the American Cancer Society.

So let’s talk about breast health. You can show your support by wearing pink this month, donating to research efforts or by simply sparking healthy dialogue.

Tree of Hope Lighting to brighten up the community

The Community Cancer Center of the Bloomington-Normal area is holding its third annual Tree of Hope Lighting 5:30-7 p.m. Dec. 5.