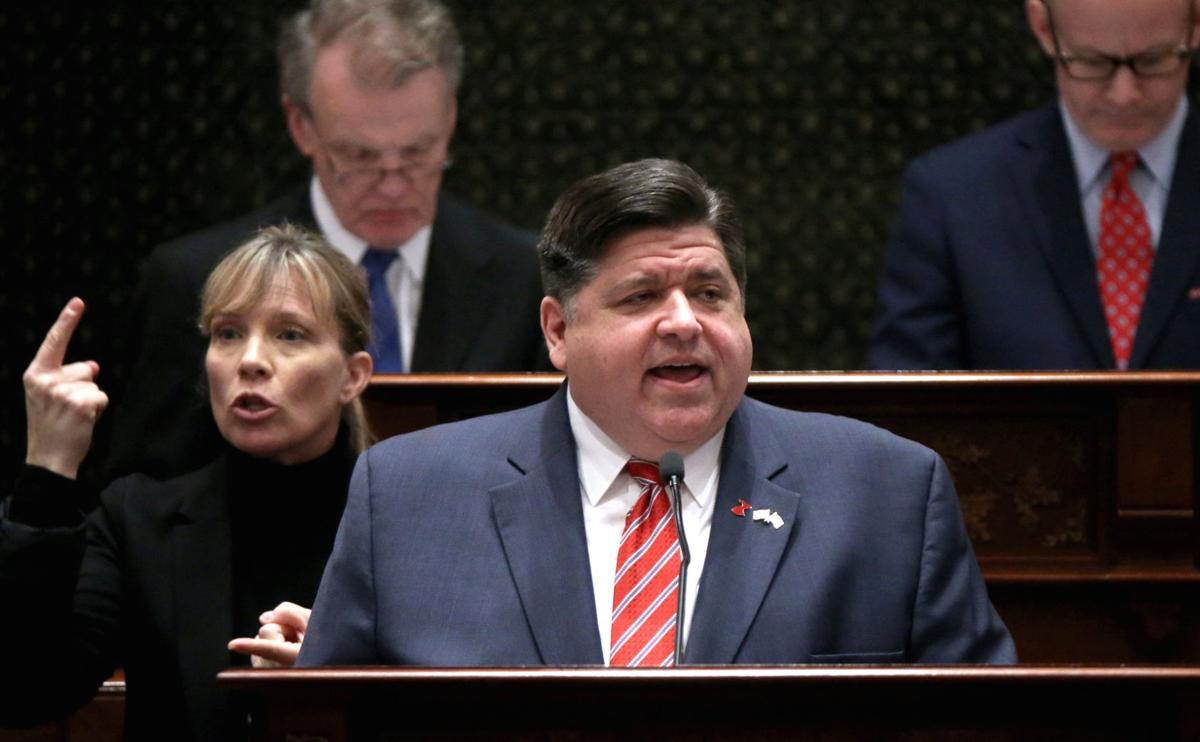 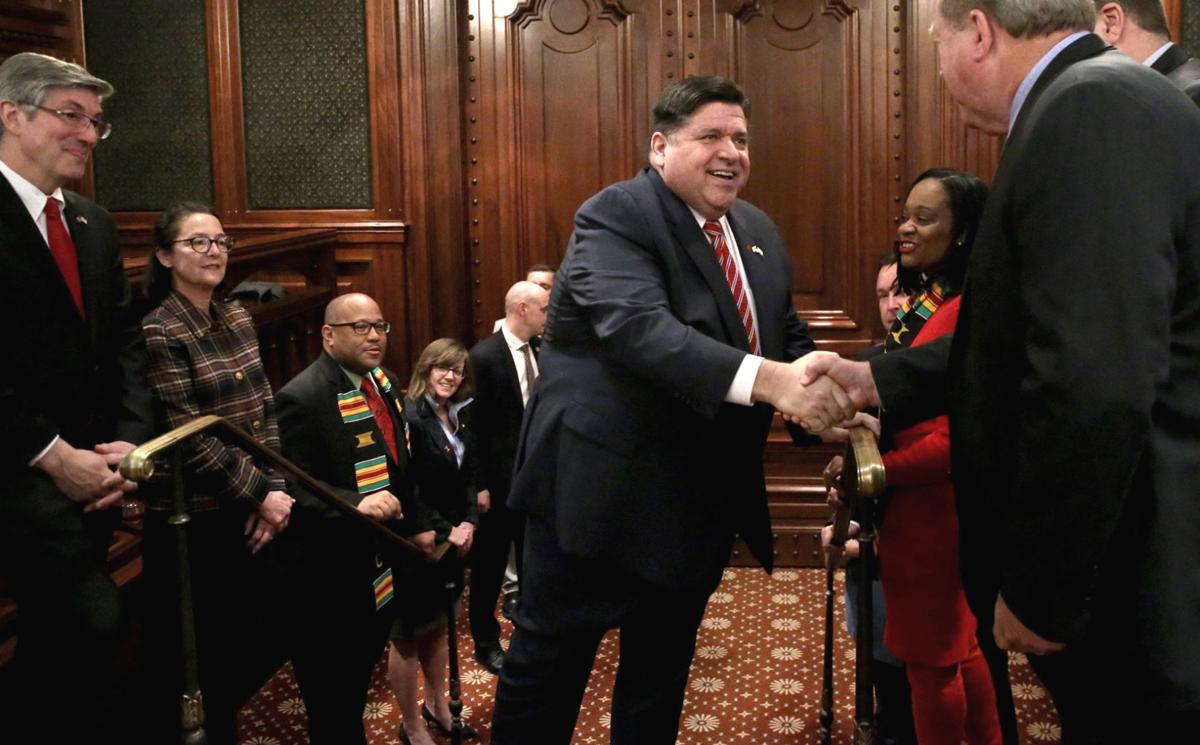 Illinois Gov. J.B. Pritzker arrives for his state budget address on Feb. 19, 2020 at the Illinois State Capitol in Springfield.

Illinois Gov. J.B. Pritzker arrives for his state budget address on Feb. 19, 2020 at the Illinois State Capitol in Springfield.

Pritzker’s $42 billion budget proposal would provide $1.4 billion in additional funding for schools and public safety if voters in November pass the graduated-rate proposal, which would replace the state’s constitutionally mandated flat income tax.

“As important as these investments are, we cannot responsibly spend for these priorities until we know with certainty what the state’s revenue picture will be," Pritzker said.

The proposed constitutional amendment, Pritzker’s signature initiative, would raise an estimated $3.6 billion on an annual basis. If it is adopted by voters, Pritzker has said rates previously passed by the legislature would boost the income-tax burden on the wealthiest 3% of taxpayers, with the other 97% paying at least the same or less.

Pritzker’s proposed budget would boost funding for child welfare, public education and Illinois’ chronically strained pension systems if the graduated-rate income tax is approved. The tax would kick in Jan. 1 and raise an estimated $1.4 billion in the budget year beginning July 1.

Without a shift to a graduated income tax, the state, for the first time, would fall short of making the $350 million annual increase in public school spending required by an education funding formula approved in 2017. Pritzker’s back-up plan would lower that amount by $150 million.

With the state’s public employee pension debt approaching $140 billion, Pritzker pledged that $100 million in revenue from a graduated income tax would be added to the state’s annual pension payments. He also said that figure should be doubled in subsequent years.

“This is not a political football. This is a financial issue that is complex and requires consistency and persistence to manage, with the goal of paying the pensions that are owed,” he said.

“The idea that all of this can be fixed with a single silver bullet ignores the protracted legal battle that will ultimately run headlong into the contracts clause of the U.S. Constitution,” he said. “You will spend years in that protracted legal battle, and when you’re done, you will have simply kicked the can down the road, made another broken promise to taxpayers and left them with higher tax bills."

The state constitution currently describes pension benefits as a “contractual relationship” and that benefits granted cannot be “diminished or impaired.” But Pritzker said the state should also pursue alternatives, such as expanding a pension buyout program begun last year.

Though Pritzker sought to promote optimism and decry what he said was a cynicism that had become rampant in talking about Illinois finances, he was blunt when he told lawmakers, “Our choices remain hard; our financial situation challenging.”

“After years of poor fiscal management, of past leaders lying about how we got here, of scapegoating the wrong people and problems, our constituents deserve some honesty,” he said.

“No amount of wishful thinking will wave away our structural deficit or our pension obligations. No amount of lip service will balance the budget or fund our schools or improve public safety,” he said.

Sign up for The Spin to get the top stories in politics delivered to your inbox weekday afternoons.

Pritzker said his proposal adopted a “disciplined approach to managing our limited resources while also investing in the very efforts that will make our state stronger: better schools, greater public safety, more job creating businesses, improved care for our most vulnerable children and seniors.”

Pritzker accused his predecessor, one-term Republican Bruce Rauner, of seeking to lower the “wages of workers, trying to bankrupt the state and seeking to destroy government.”

He also assailed a small group of Downstate Republicans who back longshot efforts to separate Chicago from Illinois.

“Trying to separate Chicago from the rest of Illinois, whether rhetorically or literally, will not solve the economic challenges of Downstate Illinois,” he said. “Quite the opposite. So, some of you need to stop pretending that one part of Illinois can exist without all of the others. We are one Illinois.”

The governor’s budget proposal is a starting point for budget negotiations leading up to the May 31 deadline for lawmakers to approve a state spending plan. Pritzker used Wednesday’s address to a joint session of the Illinois House and Senate to make the case that his graduated income tax proposal is key to the long-term stability of the state’s historically shaky finances.

Regardless of the outcome of the graduated income tax vote, Pritzker is asking lawmakers to increase funding for the long-troubled Department of Children and Family Services by nearly $147 million in an effort to ease caseloads for child welfare workers and better protect kids in the agency’s care.

Pritzker’s proposal also counts on the state taking in $46 million in adult-use cannabis revenues for the budget year that begins July 1, which will be the first full budget year with recreational marijuana revenue flowing into state coffers. Of that money, $10 million would go to reducing the state’s $7 billion backlog in bills.

Do you plan to support a constitutional amendment to create a graduated state income tax in the November election?

After Gov. Pritzker announced the release of $500 million in funding for the Illinois Innova…

“This is not a political football. This is a financial issue that is complex and requires consistency and persistence to manage, with the goal of paying the pensions that are owed.”