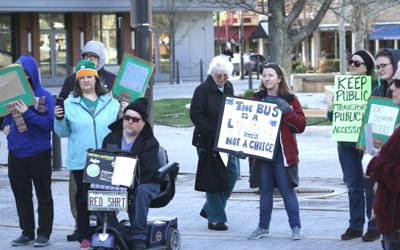 With the recent announcement by Connect Transit of increased bus fares and the closing of the Olive route, the Bloomington-Normal community held a protest rally Monday evening in Uptown Normal.

The band of BloNo community members met outside Uptown Station to express their rights in a small rally. The crowd of protesters were given the chance to have their voices heard.

Protester Katarina Mayberry spoke out saying that more of the community would be here, but they can’t get here due to changes in the bus system.

With the loss of the Olive route, it now takes community members more time to arrive at their destinations. Riders now have to travel in the dark longer, which can cause a potential safety issue in some areas.

One protester, Conan Calhoun, gave an example of a blind passenger who was dropped off in the middle of the road by transit. This passenger didn’t know where he was or where to go. Calhoun also mentions that the community isn’t in the loop with the decisions that are being made about transit.

He went on to say that the Connect Transit motto is, “We’re all about safety.” Then questioned how the bus dropped off someone who is blind in the middle of the road.

“I know that there are some conversations being had, but I am not seeing or hearing a whole lot out here in the community. We have a lot of people that are suffering because of the fair increase. The conversation needs to be had of both cities with our leadership, not sure why that’s not really happening,” Calhoun said.

Some of the community members have been talking and advocating for this topic for months now. Those rallying want to be heard and appeared determined to not quit.

Rally attendee and Normal Township Supervisor, Sarah Grammer  questioned why the Normal Town Council members are continuing to bring more pressure on those who are struggling with mobility as well as financially.

“I just feel very passionate about our need to protect our public transportation system and assure it is accessible and affordable for all those in our community who need it. Where are the benefits to the rest of our community?  [Why are we] raising rates on people with disabilities and people who are impoverished in order for them to have access to our community? I don’t think that adds up,” Grammer said.

After the rally, protesters and community members headed upstairs to the fourth floor of Uptown Station and sat in on the Town Council meeting. Those who rallied knew Connect Transit was not on the table of discussion, but attend the meeting to show the council members that they were not done speaking out.

With supplemental resolution for motor fuel tax and a resolution authorizing amendment 1 to the Blackstone Trails Annexation Agreement approved, members of the committee said goodbye to two of their board members.

The protesters will continue to speak out about Connect Transit’s fare hikes and route closure for more town meetings to come.

KACEY NICHOLS is a News Reporter for The Vidette. She can be contacted at vidette_knicho5@ilstu.edu Follower her on Twitter at @Kacey12793516

The on-demand service for riders with disabilities, Connect Mobility, will see fares increase from $2 to $2.50 in October and raise it to $3 by 2022.