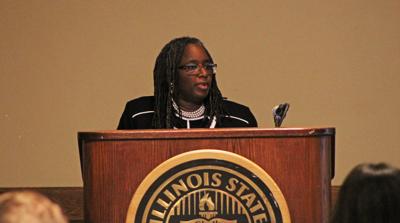 Editor's Note: This article is part of a series of ongoing coverages in the search for the next ISU provost. To read about the other candidates, refer to the links attached to this article.

The search for the next ISU vice president of academic affairs and provost continued on Thursday afternoon with candidate Menah Pratt-Clarke speaking.

Pratt-Clarke is currently the Vice President for Strategic Affairs and Diversity and Professor of Education at Virginia Polytechnic Institute and State University. She is a member of the President’s Executive Staff at Virginia Tech and oversees the Office for Strategic Affairs and the Office for Inclusion and Diversity and the Council on Virginia Tech’s History as part of the Sesquicentennial Committee.

Before Virginia Tech, she served for about ten years at the University of Illinois at Urbana-Champaign as Associate Chancellor for Strategic Affairs, Associate Provost for Diversity, and Title IX Officer. At UIUC, she also led multiple projects involving diversity efforts and strategic planning.

Pratt-Clarke earned her bachelor’s degree in English with minors in Philosophy and African-American Studies and her master’s degree in Literary Studies from the University of Iowa. She also received a law degree and a master’s and doctorate in Sociology from Vanderbilt University. Pratt-Clarke’s teaching and research interests focus on issues of race, class, gender in education and the transdisciplinary analysis of diversity in higher education.

At the forum, each finalist is given about 20 minutes to talk about their background and share their vision for how they see the university moving forward.

Her focus of the forum and her vision for Illinois State related to the metaphor, 'initiation in an underground forest,’ referencing her new book project and Clarissa Pinkola Estés’ book, ‘Women who Run with the Wolves: Myths and Stories of the Wild Woman Archetype.’

From there, she connected this metaphor to ISU students, faculty, staff and administration. She spent some time speaking about how the metaphor applies to each as well as the many stages of life that humans go through before college, during college and after college.

“My own life journey fits remarkably into these stages. In my new book project, I dissect, categorize and analyze 45 years of data in personal journals to track my own initiation journey through these stages. Ironically the reason I am here today is that my journey began here at Illinois State University,” Pratt-Clarke said.

Pratt-Clarke discussed the importance that each part of the institution holds in one’s journey, stressing that guidance, experience and searching are the biggest pieces to learning and success. She also highlighted that this guidance and support often begins with the parents who send their children off to college and leaves it to the institution to give their children what they’re searching for.

“When parents send their often teenage students and children to our institutions, it’s like the first stage. The bargain is not knowing. It’s a bargain often made by parents to support the development of their child. The students do not know what they will experience [and] what they will find, but it is an act of faith [and] of trust in an institution in its values and its promises to deliver an education,” Pratt-Clarke said.

She then went on to discuss how that faith and trust in an institution should be valued and used to the benefit of both the students and the institution.

“At Virginia Tech about a year ago, there was an incident involving diversity where a group of predominantly white female students on the lacrosse team were on a bus and they were singing a song with the n-word in it. They decided to record themselves singing the song and then put the recording on social media. Now there’s a video on social media of these student athletes singing a derogatory song, so now the institution has to respond. Where I sit at Virginia Tech, I’m in sort of the president’s leadership team. The question became for us, ‘how do we respond? Who responds and what is the response?’ because now it’s become a crisis.”

“My intuition was that I wanted to respond as the chief diversity officer in terms of what’s the right thing to do. But my response was going to be nuanced because I think the emotion of the situation said the girls singing the song was wrong. But actually, the song was very complicated and there was an African American person singing the song also saying the n-word in the song. I felt that was an opportunity to have a discussion about who and when can say the n-word. So it wasn’t necessarily a criticism of the white girls saying the n-word as [it was] a larger societal issue about when and who can say derogatory words and what is the implication and historical significance of that word.”

How should we keep giving individualized attention and transformative experiences to over 21,000 students?

“I do think that the first [step] for defining the expectation of an institution is defining a value, so I think having to find individualized attention as a core value then creates the responsibility for actualizing that, but what does that actually look like? I don’t know if it’s an expectation that every faculty member interacts the same way with every student, but I think it creates an ecosystem within an institution that a student will feel that attention from different individuals across the institution. I think we often assume ‘oh, it’s just x person needs to do y work,’ but I think at an institution the opportunity is to recognize a range of individuals can impact a student.”

“I think across an institution there are staff, faculty and other students that can provide that individualized attention if the culture of the institution is structured in such a way to advance that. I think that one of the challenges, or at least what I often think about, is that we’re existing in a society where technology has encouraged an n-word focus in terms of social media, apps and phones and not an external engagement culture. We’re bringing students from a particular generation into an environment where the expectation should be face-to-face interaction, but we have given them a world where they don’t have to do that. So it’s hard to think about creating individualized attention where all of our attention is directed to our particular inanimate object that seems to have its own life.”

Search for ISU provost continues: Agbényiga stresses importance of investment in self

Editor's Note: This article is part of a series of ongoing coverages in the search for the next ISU provost. To read about the other candidate…

Four finalists are still eligible to be named the new Vice President of Academic Affairs and Provost, however, a new face has entered the running.