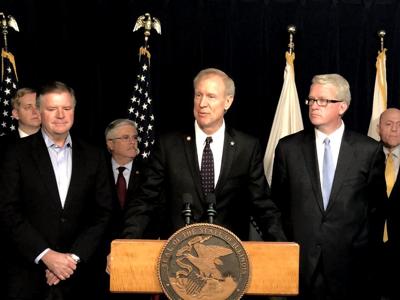 Republican Gov. Bruce Rauner on Monday signed into law a $38.5 billion spending plan for state government, approving a full budget on time for the first time since he took office in 2015.

A $5,000 tax credit for families who adopt children.

About $500 million for a University of Illinois-led innovation center in the South Loop called the Discovery Partners Institute.

Payments for state workers for wage increases that they were promised by former Gov. Pat Quinn but were never paid.

About $1.5 billion in spending cuts.

Flanked by Republican and Democratic lawmakers, Rauner touted the legislation as the product of "a great team effort, a great bipartisan effort."

"Today we are having a small celebration," Rauner said at a signing ceremony at the James R. Thompson Center in the Loop, adding that the budget was a compromise. "It is not perfect, but it's a good step in the right direction."

The budget legislation is the product of negotiations between the Democrats who control the General Assembly and Republican lawmakers allied with the governor.

Unlike in previous years, when Rauner had insisted that a budget deal come alongside approval of his broader legislative agenda, the governor this time requested only a balanced budget that required no new taxes. That meant that lawmakers were free to spend the money they'd raised through a new income tax increase that was enacted last summer over Rauner's objections.

The plan maintains state government spending close to existing levels. It boosts funding for early childhood and K-12 education by a combined $407 million. And it projects savings of $445 million from new pension buyout options for state pensioners.

It’s not a perfect fiscal plan, but it’s a step in the right direction. My hope is that we continue the bipartisanship that steered us to this day. Still must enact reforms that cut the cost of government, make the state friendlier to job creators, and ignite our economy. pic.twitter.com/0Rw6GS9p0r

Sen. Heather Steans, a Chicago Democrat and chief budget negotiator, said she wore purple to the ceremony as a nod to bipartisan compromise.

"I really do believe that the process was what it should be, with everybody coming together and creating a product," Steans said. "We still have a lot of challenges in the state of Illinois that we haven't yet tackled and I really hope that doing it in this fashion provides a foundation from which we can delve deeply," into those issues.

Democratic Rep. Greg Harris, another point person on the budget talks, noted that the budget for the financial year that starts in July was "built on the foundations laid by the budget we passed last year on a bipartisan basis."

That's an allusion to the billions of dollars in new money that was available this year as a result of the dramatic budget showdown that ended last summer, when some Republican lawmakers broke with the governor to help Democrats pass an income tax increase.

This year, House Republican Leader Jim Durkin of Western Springs cast the budget agreement as a turning point for the typically divided legislature.

"The men and women behind me reflect, I believe, a new attitude in Springfield, one that encourages but also demands bipartisan cooperation," Durkin said.

In a news release from the State of Illinois, Senate Republican Leader Bill Brady (R-Bloomington) said:

"I commend Governor Rauner for his leadership in helping get us a budget we can balance."

Rauner largely kept silent about the budget-making process during the final weeks of negotiations. But at the bill signing on Monday, he highlighted several portions of the budget that he said he was most proud of.

The budget provides a $5,000 tax credit for families who adopt children. It sets aside $500 million for a University of Illinois-led innovation center in the South Loop called the Discovery Partners Institute. And it pays state workers for wage increases that they were promised by former Gov. Pat Quinn but were never paid. A recent court order required the state to make payment of that back pay.

Rauner also noted that lawmakers had found $1.5 billion in spending cuts as well.

"It's not easy to make cuts, but the reductions in spending were made and I'd like to thank everyone for the discipline to achieve that," Rauner said.

Illinois' budget agreement that was signed into law Monday by Gov. Bruce Rauner is welcome n…