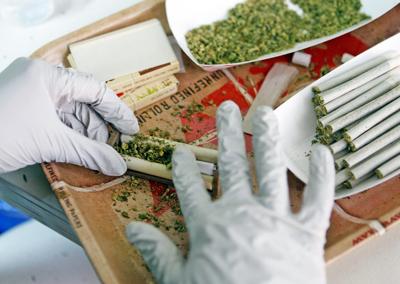 Recreational marijuana is just a signature away from being legal in Illinois, and dispensaries are staffing up, remodeling, and wasting no time preparing for new foot traffic.

Illinois lawmakers approved a bill Friday that, with Gov. J.B. Pritzker's promised signature, will allow the state's 55 medical dispensaries to apply to sell recreational marijuana. Additionally, the dispensaries can apply to open a second location. That means more than 100 dispensaries could be selling marijuana by the beginning of next year.

Dispensaries are renovating their spaces and streamlining their processes to serve more customers. Dispensary 33 in the Uptown neighborhood got a glimpse of what recreational sales volume could be like on April 20, when a festival celebrating marijuana was held outside the dispensary and patients flocked to the store for deals.

Dispensary 33 is redoing its interior to make room for displaying more cannabis products, and is looking for space to open a second location. Marijuana company Ascend Illinois has dispensaries in Springfield and Collinsville, and plans to apply to open two more under the upcoming law, said CEO Chris Stone.

"We've located specific sites that we will be adding a recreational license too and looking to open up on Jan. 1 when it becomes legal," he said.

Ascend Illinois employs 54 people between its two dispensaries, and Stone said he expects that to grow. The company has already been working to staff up and expand the inside of its facilities in anticipation of the growing medical cannabis program.

Mission Chicago South Shore Medical Marijuana Dispensary, one of the few dispensaries on the South Side, is readying its building -- inside and out -- for the recreational market.

"As we speak, we're painting a mural on the outside of our building," said general manager Rick Armstrong. "We're branding so people can see we are a dispensary."

Inside, the dispensary is building a classroom to be used for marijuana education, adding registers and planning to double employee count to 20 by year's end. It's also changing the shop's set up to be more self-serve, arranging the products by type -- topicals in one section, edibles in another. Customers will come in and see cards describing each product, just like you might see in a wine shop, and take that card up to the register for checkout.

Consultants will be taking orders on iPads, or customers can preorder online. All the different shopping methods will help Mission control the flow of customers, Armstrong said.

If you are 21 or older, are you likely to purchase recreational pot when it becomes legal next year?