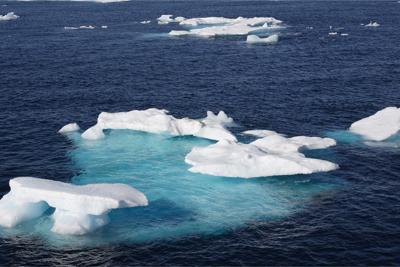 The team, comprised of environmental professionals from across the country, studied the correlation between sea ice coverage in the Canadian Arctic and heat wave patterns in southern states using satellite data from as early as 1979.

“The latest research on this topic suggests that declining Arctic sea ice may be linked to increased incidence of extreme weather patterns across the northern hemisphere,” Budikova told the American Geophysical Union.

According to the study, Budikova and her team found that slightly warmer Arctic springs cause a less drastic temperature change between geographic areas of eastern North America.

Consequently, wind strength in these areas decreases and forms high-pressure systems as the air moves south. This pressure results in a warmer atmosphere and clearer sky.

“Our results confirm this hypothesis by offering further evidence that Arctic sea ice variability has the potential to influence extreme summer temperatures and the frequency of heat waves across the southern U.S,” Budikova told the AGU.

Tracking the decline of arctic sea ice in the Canadian spring could help weather forecasters predict the temperatures of the next summer in the southeastern states and southern plains.

Additionally, the study could help scientists determine the probability of heat waves before summer begins.

“If arctic sea ice continues to decline as predicted, then we could expect more summer heat waves across the southern U.S. in the future,” Budikova said during her interview with the AGU.

Though high pressure systems occur in all parts of the country, researchers focused on the southern part of the country where other environmental factors increase heat wave severity.

“Antecedent local humidity, soil moisture, and precipitation conditions are shown to influence the ‘flavor’ of the heat waves, which are more likely to be oppressive in the southeastern US and extreme across the southern Plains,” according to the study.

The team will continue their research by using dynamic models to determine exact statistical relationships that prove the correlation between declining arctic ice and heat wave occurrence.

For those in Bloomington-Normal, the team’s research may provide a possible cause for unexpected heat waves as well as an explanation of the environmental factors necessary for predicted heat waves, like the one that hit the area after Hurricane Barry made landfall on the east coast, to stay in one place for days at a time.

“Our results confirm this hypothesis by offering further evidence that Arctic sea ice variability has the potential to influence extreme summer temperatures and the frequency of heat waves across the southern U.S.”