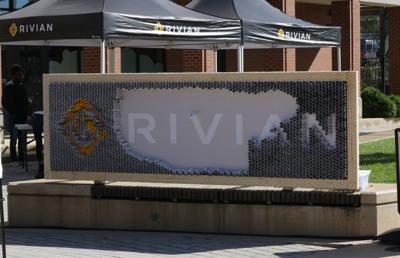 Rivian showed off some of its vehicles to locals in Uptown Normal to get in touch with the community Sunday afternoon.

Rivian is an electric automotive manufacturing company that has recently made waves in McLean County. It recently purchased the previous Mitsubishi plant in order to produce cars in the area.

Rivian Facilities Manager Tony Overmier says Rivian has a lot of things it can bring to the area.

“The list is endless, you just think about all the satellite industries that came into Bloomington-Normal when Mitsubishi opened,” Overmier said. “I think you can probably multiply that by a factor of 10 at least because of all the new technology, the type of vehicle we’re making and all the different aspects of that vehicle.”

Overmier said this showing was a big deal for Rivian, as it has been typically seclusive since buying the plant.

Showing one of its trucks off in public is what some residents consider the best local advertising that Rivian has done. Bloomington-Normal resident Austin Hoth said that this event was a good sign as a consumer.

“Being here when they’re finally showing it in public … it means a lot,” Hoth said. “The company is showing that it’s ready to start producing. The truck they have out looks beautiful.”

The event was only for three hours but had quite a turnout, including a visit from Gov. JB Pritzker. Rivian plans to start selling vehicles in the near future.

Rivian is developing more than just vehicles, technologies and services.

Two years ago, the Mitsubishi manufacturing plant left the Bloomington-Normal community, to the dismay of many local residents, employees and …