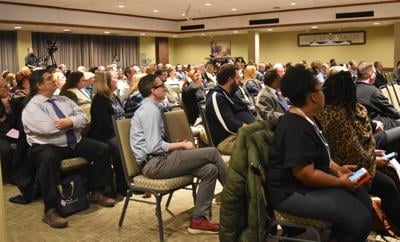 Editor's Note: This article is part of a series of ongoing coverages in the search for the next ISU provost. To read about the other candidates, refer to the links attached to this article.

The second of four finalists up for the position of vice president of academic affairs and provost spoke to the Illinois State University community Tuesday afternoon.

She earned her doctoral degree in social work, MBA in strategic management and an MSW in Social Work-Urban Studies from Michigan State University. Her bachelor's degree in criminal justice is from the University of South Carolina, Columbia.

The university has set up public forums as an opportunity for the campus community to learn more about each of the candidates. At the forum, each finalist is given about 20 minutes to talk about their background and share their vision for how they see the university moving forward.

Following the presentation, the floor is open to any questions from the crowd. For those unable to attend the sessions, a recording of each of the Open Forums is available online after the session is concluded.

Those in attendance are also given the opportunity to rate each of the candidates based on different categories.

These categories include vision, academic leadership, communication and interpersonal skills, resource management and development, administration, diversity and overall suitability to serve in this position.

Agbényiga gave specific examples of programs, initiatives and accomplishments at ISU and then showed examples of how she plans to elevate each of these and help them grow further.

“I want to point out that as much as I am extremely supportive of having international partners and being engaged at that level, we also need to acknowledge that there is a global society, a global community right here. And we have to make sure that we are connected to them as well.”

She discussed the importance of building relationships between students, faculty, staff and the various other stakeholders in the university.

“We can constantly talk about how we want to do things, but if we are not going to invest in ourselves, it’s very difficult for us to be successful as well,” Agbényiga said.

“When I talk about the investment, I’m talking about an integrative approach to building out Illinois State’s distinctions while allowing opportunities for us to excel. It isn’t great for an institution to be a hidden gem … everyone needs to know who you are and what you are doing.”

Agbényiga discussed that she believes in the importance of overall well-being for all students. She touched on the fact that many college students are dealing with mental health issues as well as housing and food insecurity. She wants to be able to support students beyond the classroom in order to increase their chances of success within the classroom.

Q and A Portion with Agbényiga

Can you share an example of when you’ve advocated for a student and your advocacy or decision may have contradicted institutional policy … or the culture of the institution, but was the right thing to do by your estimation?

"A student came in to bring forth an issue that happened in the department where it had some assets of discrimination and this hindered their ability to move forward in the program. It also made it very financially difficult for that student. I do take the time and I did take the time then to go back and investigate what had been brought to me."

"In speaking with the student, faculty and leadership there, it led to me talking to other students who had been silenced for some time, for various reasons. This was all confidential. I did make the decision to support the student to make sure that they had what they needed to continue in the program. But I also went back to the department to talk about the findings and how it was contrary to where we were trying to go as an institution and the roles and responsibilities that we all have."

"This was not a time for me to penalize the individuals, but it was more of a learning experience and way for us to learn how to become better. I am always on the university’s side and what is better for the university as a whole."

As innovations come into higher education, sometimes faculty and some alumni get a little nervous about academic standards being compromised and rules being bent, are there some untouchable standards in your mind?

"The point is, structurally we may make some changes, but who we are as an institution and our academic standards will be the driving force of everything that we do. Let’s see how we can have a flexibility that doesn’t compromise, but allows access for those individuals who cannot fit in this traditional box that we have set up to be able to come in … how can we meet them where they are while still having our standards intact."