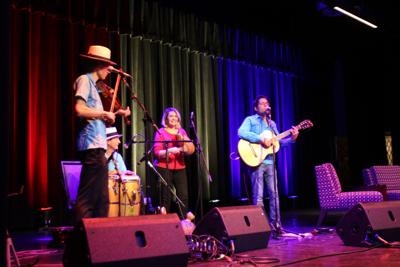 The Bone Student Center was Illinois State University’s center point for talks about diversity on campus Monday evening, as a crowd gathered for the Latino Cultural Dinner headlined by a special guest speaker.

Everyone in attendance settled in after grabbing some of the Latin food that was available to listen to the main presentation of the night, guest speaker award-winning journalist and entrepreneur Soledad O’Brien.

Growing up in a time in the country’s history where diversity was not like it is today, O'Brien faced a life of trying to blend in with the rest of the crowd while trying to find out about her own Latin roots. This was reinforced by her mother who was a Cuban native who left her home to study in the United States.

O'Brien grew up hearing stories from her mother about her time in Cuba, it wasn't until she began her career as a journalist that she truly understood the importance of these stories.

O'Brien continued to speak about her experiences as a young journalist working on numerous stories that included her first live broadcast in San Francisco back in 1993, along with a story that involved having a man believe his cat was a reincarnation of his deceased friend.

Although she was reporting on stories, she felt as if something was wrong.

“I didn’t engross myself in culture and diversity,” she said. “I was ashamed I failed to do the job of a reporter to jump on stories of the community.”

This stemmed from moving into a dominantly white neighborhood when she was younger as her family had to find a way to “blend their way into the community,” which would involve no longer learning Spanish.

As her career continued O'Brien began to report on a more underrepresented group of people.

This included her documentary “Latino in America” and “Black in America” along with several other stories that were not a part of the mainstream media.

O'Brien encouraged aspiring journalists to look deeper for stories since everyone else already will be reporting on the same main stories.

“You will have a lot of pressure to fall back in the stories everybody knows,” O’Brien said.

To end her presentation, O'Brien made a few comments for the students in the audience in regards to being a journalist.

“The hardest part is making the connection and writing the story, then finding someone to listen to you,” she said.

“Make sure to explode everyone’s expectations.”

“The hardest part is making the connection and writing the story, then finding someone to listen to you. Make sure to explode everyone’s expectations.”