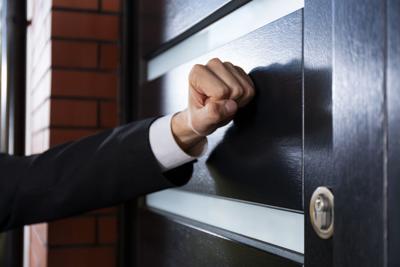 Following reports of a suspicious person knocking on doors at Sugar Creek Apartments, one resident is sharing her experience with the stranger.

According to a tweet that has garnered some attention within the ISU community, a suspicious person posing as a utility worker has been knocking on doors trying to gain entry to the apartments.

PSA ISU STUDENTS !!!A man has been going around apartments banging on doors impersonating a utility worker trying to gain entry. He DOESN’T work for the company or the apartment companies DON’t let him in! Most recently at sugar creek 11/20/19 RT and reply any other warnings

Normal Police Department Community Officer Brad Park said that NPD has not received reports of forced entry or attempted entry, but to be careful if that's the case.

"Obviously, if that's the case, shut your door as quickly as possible, lock it and call us if they're trying to gain entry without your authorization," Park said.

While a few users on Twitter have claimed that the man has been seen at other apartments on Vernon Street, NPD said they have received reports only from Sugar Creek.

He came to the first building off of Vernon & banged on almost everyone’s doors with a friend last week (11/12) around 3:30pm. Extremely persistent and kept trying to step inside my apartment. Please be careful everyone!!!

NPD also has no official description of the suspicious individual. They currently believe him to be a solicitor who is overly pushy. The Town of Normal requires solicitors to have a permit from NPD that lasts 30 days. A list of individuals with a proper permit can be found online.

Sugar Creek resident Cassie, who asked not to share her last name, said that around 1:45 p.m. Nov. 20 a man started "banging loudly on her door."

The man claimed to be with Ameren electric and asked to enter her apartment. She told him he had the wrong apartment and he insisted he had the right one. Cassie said they went back and forth for a while.

"I explained to him that this building is with First Site and they handle our bills and he was very curious on if the entire complex was like that," she said. "Meanwhile, he had a friend with him that was banging on other doors in my building."

She describes him as a Hispanic male in his late 20s. He wore a lanyard that did not have the Ameren name on it and had no ID badge. She did not see the second person knocking on doors.

"He had a [energy drink] sitting on my steps as if he had been sitting there," she said. "I ended up shutting my door on him and calling [First Site], who said they did not send him and to call the cops."

Cassie said both men drove away in a white van.

NPD and ISU PD said there are several tips for staying safe from solicitors. Firstly, use the peep hole in your door and do not open your door if you don't feel safe. Call the landlord or company the solicitor claims to be with to check their identity. Lastly, if the solicitor is pushy or tries to enter an apartment, call the police, as they can be fined or their permit can be revoked.

(2/2) You can 1) Look and Ask for ID before opening the door, 2) Call your landlord to send maintenance to meet the Utility (still don't open the door) or 3) call PD if your spidey sense is tingling. We are here to help. #OurCopsCare #YourRedbirdLife

"I'm worried. I feel super unsafe in our building because there's no lock on the main door, anyone can come in and knock on our doors," Cassie said.

"I'm worried. I feel super unsafe in our building because there's no lock on the main door. Anyone can come in and knock on our doors."

Tips to keep your place safe over break