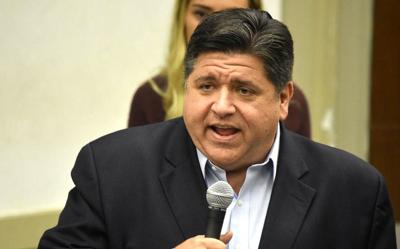 "In a time when too many states across the nation are taking a step backward, Illinois is taking a giant step forward for women's health," Pritzker said in remarks at the Chicago Cultural Center before signing the bill. "Today, we proudly proclaim that in this state, we trust women."

Titled the Reproductive Health Act, the law repeals the Illinois Abortion Law of 1975. It eliminates felony penalties for doctors that perform abortions, removes waiting periods and removes the requirement that a married woman get consent from her husband.

The bill establishes the "fundamental right" of a woman to have an abortion and states that a "fertilized egg, embryo or fetus does not have independent rights." The law also requires that the cost of an abortion be treated like any other medical procedure for insurance purposes.

Illinois lawmakers approved the legislation in the recently ended spring session amid an increased sense of urgency among advocates looking to protect abortion access as a series of states recently passed laws essentially banning the practice.

Pritzker has said the law makes the state the most progressive in the nation for reproductive health care.

"I promised that Illinois would become a national leader in protecting reproductive rights," Pritzker said. "Illinois is demonstrating what it means to affirm the rights of individuals to make the most personal and fundamental decisions of their lives no matter their income level, no matter their race, ethnicity or religion. ... This law puts the decision making where it belongs -- in the hands of women and their doctors."

Pritzker's news conference was marked by whoops, cheers and hugs, but a much more somber mood prevailed on the ground floor of the cultural center, where abortion opponents gathered to issue their response.

"We're already the bankruptcy capital and the corruption capital, now we add abortion to that list," said Peter Breen, a former state representative who is now vice president of the Thomas More Society, a religious advocacy nonprofit group.

Breen called the law "a new death penalty," and said it removes necessary regulations and licensing requirements and eliminates the rights of unborn children.

"We in Illinois have a history, including in recent years, of filthy, dirty abortion clinics being shut down based on inspections done by the state of Illinois," Breen said. "As of today, the statutory sections that supported those shutdowns have been wiped off the books ... parental notice has now been put at risk. We are looking forward to trying to defend that in court."

Across the country, states have been passing laws that limit the use of private and public insurance to pay for abortion and instituting long wait periods to discourage women from getting the procedure. Six states have only one abortion clinic, so it requires women to travel long distances if they want to terminate a pregnancy.

Among the states limiting access to abortion is Missouri, making the state's border with Illinois a front line in the national abortion rights battle. It took court action to keep the state's one operating abortion clinic in St. Louis open.

Mary Kate Knorr, spokeswoman for Illinois Right to Life Action, called the Illinois law an extreme action and said "we anticipate that the daily rate of abortions in Illinois will increase.

"We also anticipate that the rate of injury to women as the result of negligent clinics will increase. We suspect more clinics will open and more dollars will be made by the abortion industry which capitalizes on our loose laws."

A number of the measures in the current Illinois abortion law are not enforced because of court injunctions. But proponents argued that several court cases that are in the pipeline to the Supreme Court could provide a path to overturning the landmark 46-year-old Roe v. Wade case, which legalized abortion nationwide.

Pritzker said the bill he signed Wednesday is a preventive measure that "ensures that women's rights do not hinge on the fate of Roe v. Wade, or the whims of an increasingly conservative supreme court in Washington."

State Rep. Kelly M. Cassidy, a Chicago Democrat, was a sponsor of the bill and among those who spoke at Wednesday's signing.

"There is a war against women, a war against bodily autonomy," Cassidy said "Our opponents are using hateful, untrue and outright misogynistic rhetoric which escalates daily and endangers women everywhere.

"We are building a firewall around Illinois to protect access," she said.

Cassidy introduced Sen. Melinda Bush, a Democrat from Grayslake, who was a sponsor of the bill in that chamber, as "my sister in badassery."

"When you elect women that are here to make a difference, that's what they do and that's what they did. I want to be clear: the freshmen women in the house, they really did move this bill," Bush said. "Without their help, without their commitment, without them saying, 'not on our watch ... we ran when a president ran and told us it was OK to grab our body parts. And we're saying no more.' So I just want to thank them so much."

At a news conference held by opponents of the bill, both Knorr and Breen stood surrounded by supporters who carried signs, some with babies and young children.

Emily Kelly, a neonatal ICU nurse at a Chicago hospital, said too many women don't know how early an unborn fetus can survive outside of its mother's womb.

"I'm a woman against abortion. That does not make me a woman against women. On the contrary, it makes me a woman who cares for women," she said. "I tell them the truth about what's growing inside them. This growing fetus is a baby, a living member of our human family."

Illinois has more abortion clinics based on population than most of its Midwest neighbors. Jennifer Welch, president and CEO of Planned Parenthood of Illinois, called the new law "an important step to remove the stigma around a simple medical procedure that one in four women in the United States will have in their lifetime."

"In a time when too many states across the nation are taking a step backward, Illinois is taking a giant step forward for women's health. Today, we proudly proclaim that in this state, we trust women."