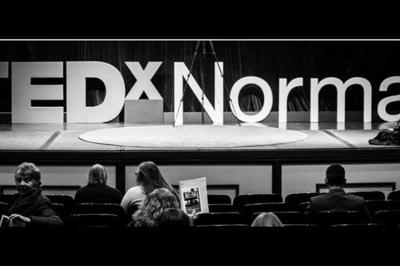 The event aimed to spark curiosity and experience a new way of thinking for all its attendants. The event featured speakers from a wide range of backgrounds and fields of interest.

With speakers who were local professors to actors the lineup of this years Ted Talk was diverse in many aspects. This year’s theme was set as "Authentic" and was split into three segments with three speakers per segment. The segments were all given specific names like Awaken, Alter and Activate.

Awaken was filled with speakers who all spoke of special challenges they have faced and ways that it affected them. Justin Sandler spoke about the great life he lived, considering he is a successful musician and actor, until he found out that he had a tumor in his heart.

Sandler went on to speak about how instead of being depressed and letting the negative aspects of the situation take over his life, that he would instead embrace it.

“I chose to love the cancer and I gave love to my chemo despite what it was doing to me," Sandler said.

This claim on how he spun this negative part of his life into a positive outlook was the beginning of the way he would look at everything. To sum it all up he emphasized three words which to explain his new way of thinking: embrace, love and free.

Dr. Doug Vakoch took the lead with his presentation for the "Alter" segment. Titled “Don’t Fear an Alien Invasion," Vakoch’s presentation touched on the fact that humans should not fear the idea of interacting with extraterrestrial counterparts in the vast reaches of space.

Ever since Nov. 16, 1974 humans have consistently attempted to contact other worldly beings. Beginning with the first international interstellar radio message that was three minutes long. According to Vakoch the message sent that day was, "We are here, and we want to make contact."

Following the presentations of Dr. Vakoch, Dr. Ramesh and Sam Cullinane the last portion "Activate" finished up the morning.

Founder of BIG Life Pamela Crim gave the audience a look into her past as she suffered a stroke when she was 19. This life altering event would take 19 years of her memory which she would only get back through several polaroid photos her family kept and gave a new meaning to a common phrase as Crim puts it.

“They say a photo is worth a thousand words, but I say it’s worth 19 years,” Crim said.

With the motivation to begin documenting her life so she and her loved ones could remember everything from the past, Crim began to look at day to day activities a different way.

The TedxNormal event was wrapped up with presentations from ISU assistant professor Dr. Jay Percell and Adam Peterson.

“Start looking for moments that may never happen again."