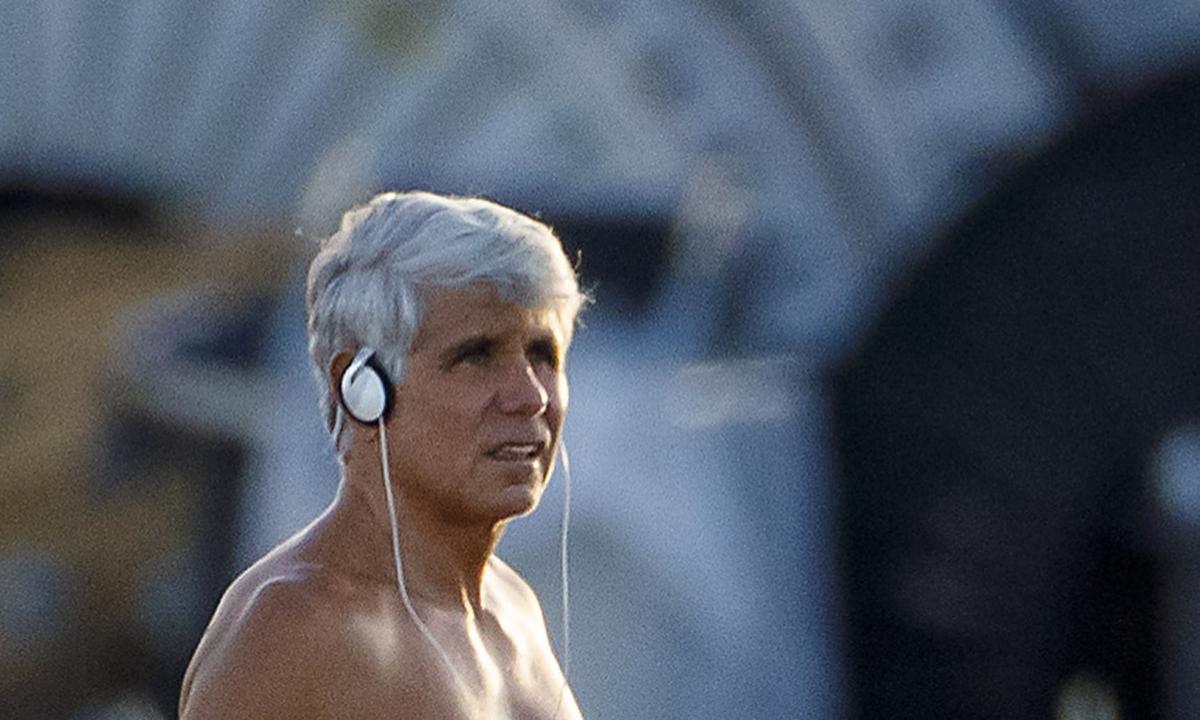 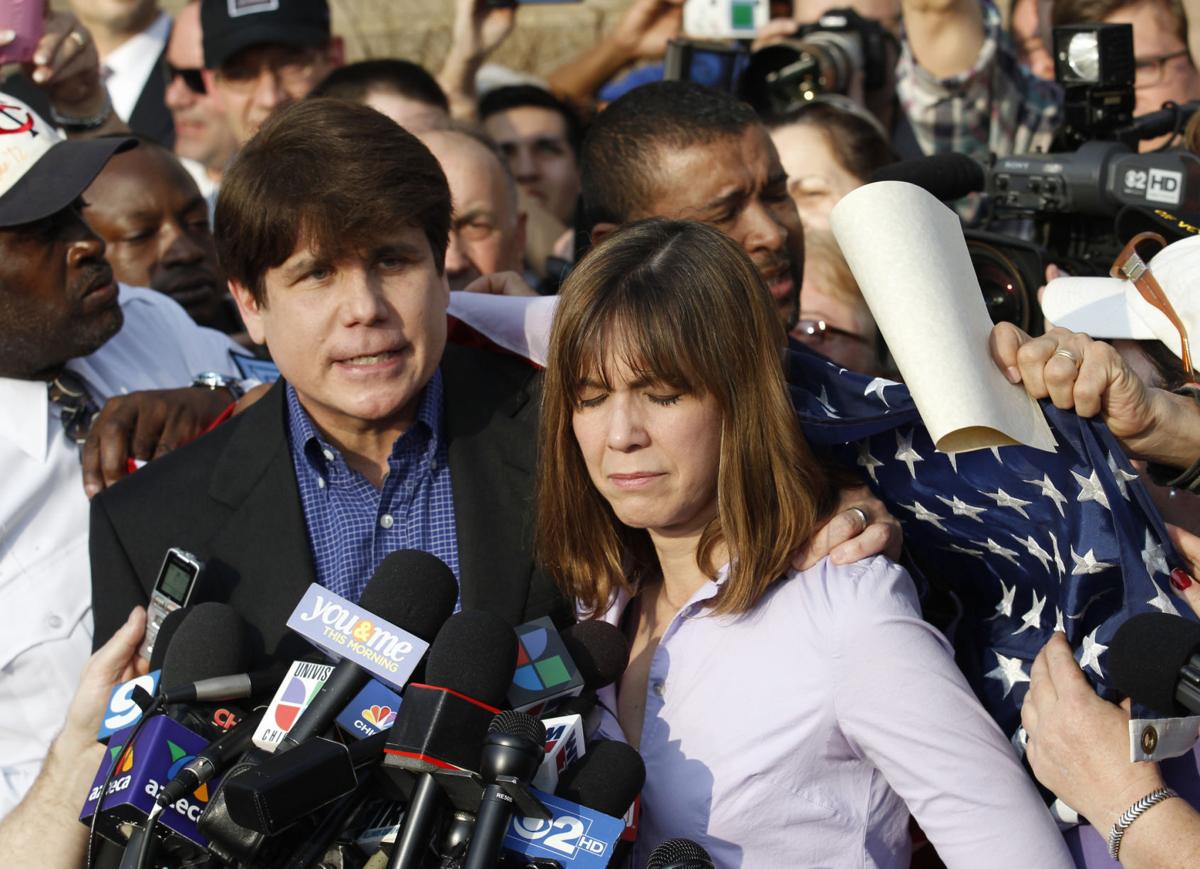 Supporters drape a flag over the shoulders of former Gov. Rod Blagojevich and his wife Patti as he speaks to reporters and supporters, gathered outside his house, on his last full day of freedom on Wednesday, March 14, 2012. 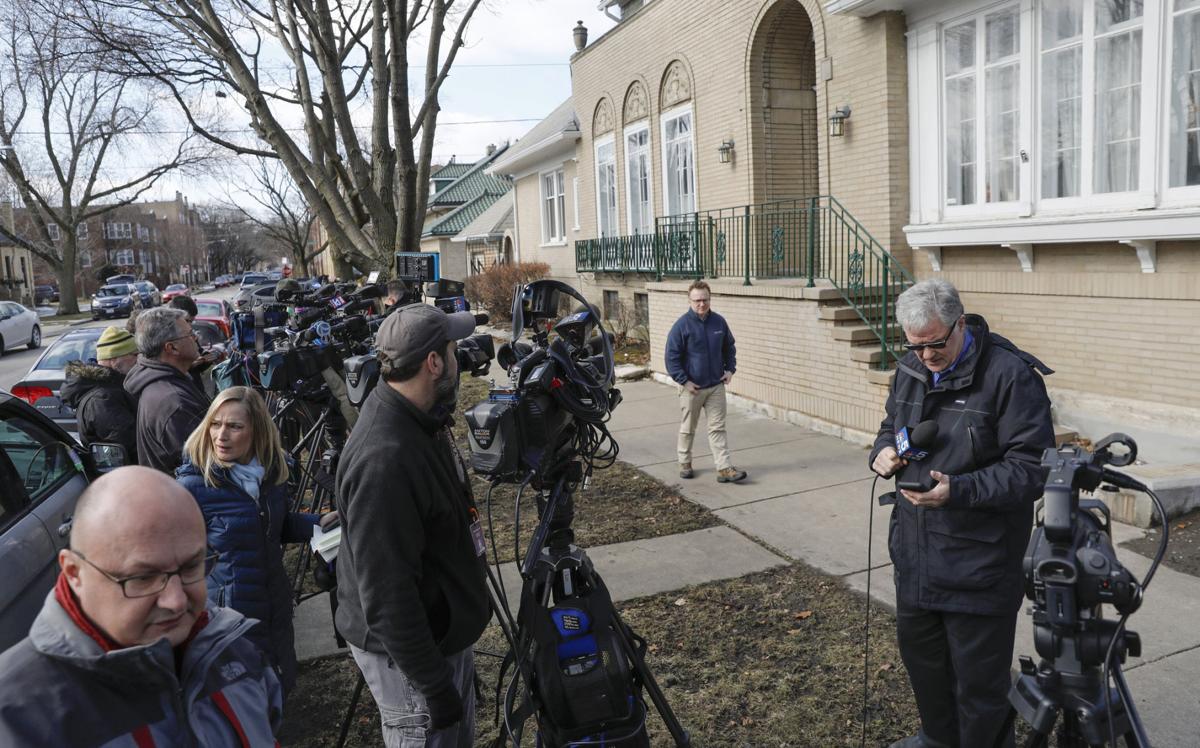 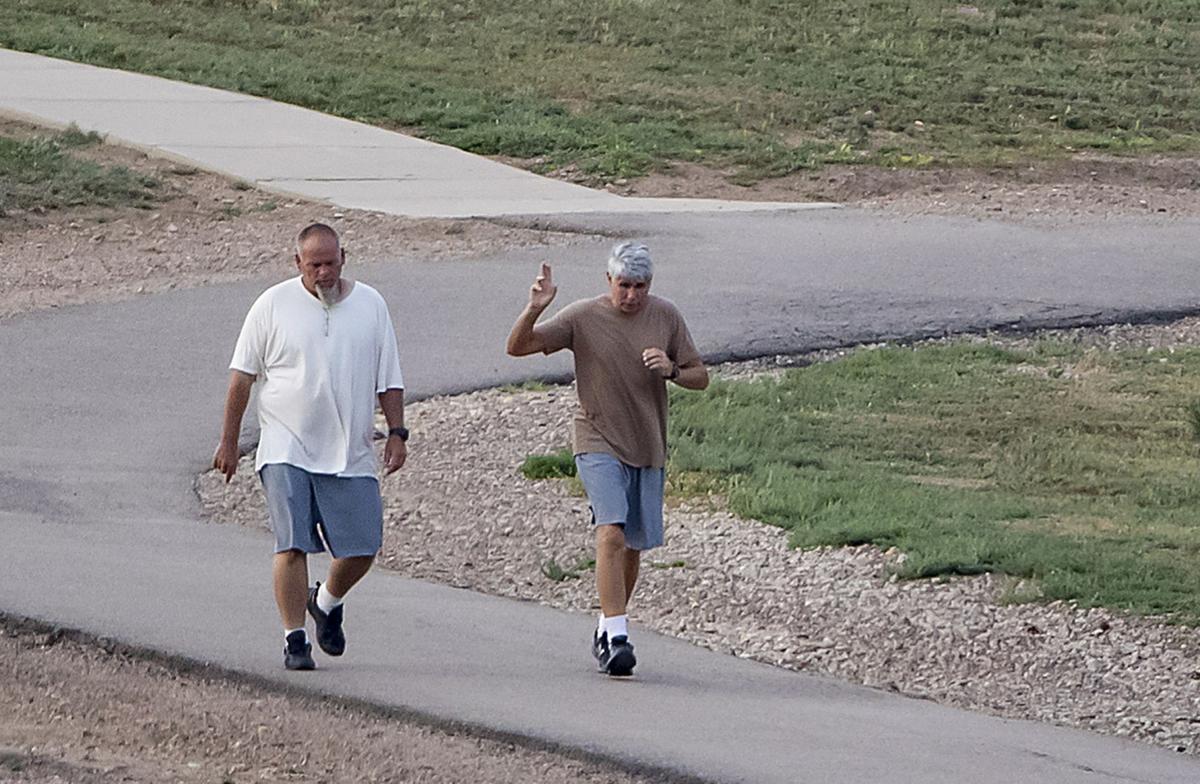 Former Gov. Rod Blagojevich waves as he goes for an evening run outside the minimum security satellite camp of the Federal Correctional Institution-Englewood where he is an inmate near Littleton, Colo. on Aug. 10, 2019. 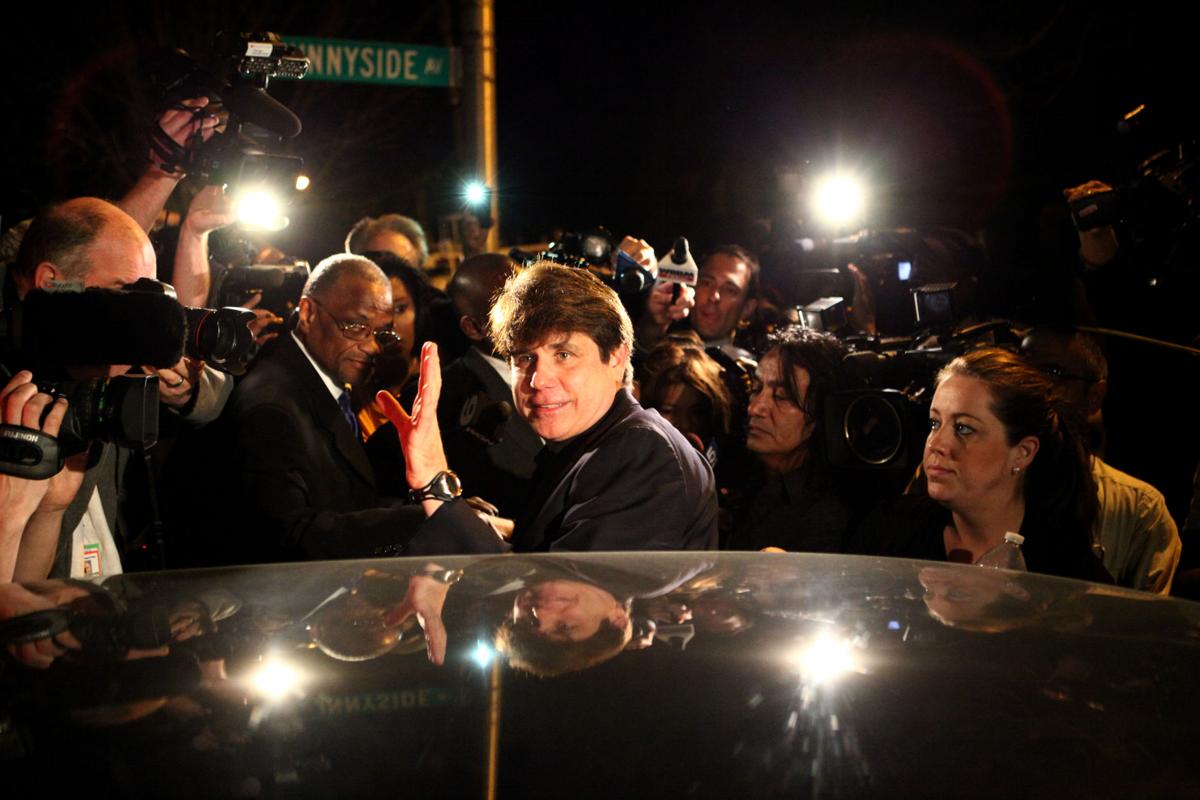 Supporters drape a flag over the shoulders of former Gov. Rod Blagojevich and his wife Patti as he speaks to reporters and supporters, gathered outside his house, on his last full day of freedom on Wednesday, March 14, 2012.

Former Gov. Rod Blagojevich waves as he goes for an evening run outside the minimum security satellite camp of the Federal Correctional Institution-Englewood where he is an inmate near Littleton, Colo. on Aug. 10, 2019.

President Donald Trump commuted the 14-year sentence of former Illinois Gov. Rod Blagojevich, springing the Chicago Democrat from prison over four years early and writing a stunning final chapter to one of the state’s most notorious corruption cases.

The controversial move comes after he granted a full pardon to former San Francisco 49ers owner Eddie DeBartolo Jr. Feb. 18 and more than a year after Trump first revealed he was considering commuting Blagojevich’s sentence.

Trump said Blagojevich’s daughters have not seen their father outside of prison, and he thought of them as he made his decision.

“He’ll be able to go back home with his family after serving eight years in jail, that was a tremendously powerful, ridiculous sentence in my opinion,” Trump said in Maryland on Feb. 18.

The move disregards the political concerns of top elected Republicans in Illinois in a critical election year.

Throughout his first term, Trump had repeatedly dangled the suggestion of freeing Blagojevich, who appeared briefly on the president’s former “Celebrity Apprentice” show. Trump often cited what he characterized as the former governor’s harsh sentence while not mentioning the details that sent him to prison — including trying to sell the Senate seat of then President-elect Barack Obama for personal or political enrichment.

He last raised the prospect in August, when he told reporters aboard Air Force One that he was “very strongly” considering issuing a commutation to Blagojevich, who was scheduled to be released from federal prison in 2024.

“I thought he was treated unbelievably unfairly,” Trump said.

Blagojevich served as governor from 2003, was re-elected in 2006 despite a swirl of federal investigations and was impeached and removed from office in 2009.

He was convicted in December 2011 and sentenced to 14 years on corruption charges. In addition to the proposed sale of Obama’s Senate seat, Blagojevich also was convicted of trying to shake down executives from a children’s hospital and the horse-racing industry for campaign contributions in exchange for official acts in office.

In commuting his sentence four years early, Trump added another chapter to one of the state’s most notorious corruption cases which led to the first impeachment of a governor in Illinois’ scandal-tarred history.

Trump essentially became Blagojevich’s last hope for any reprieve after the United States Supreme Court in April 2018 declined to take up the ex-governor’s appeal.

Within weeks, Blagojevich and his legal team embarked on a calculated public relations campaign attacking the ex-governor’s conviction as unjust and politically motivated.

On Memorial Day 2018, the Wall Street Journal published an op-ed piece by Blagojevich under the headline, “I’m in Prison for Practicing Politics.” It began by saying that the “rule of law is under assault in America.”

Blagojevich’s legal team filed a formal request for executive clemency with the U.S. Department of Justice in June 2018.

Meanwhile, Patti Blagojevich made repeated appearances on national cable news — most notably Fox News, Trump’s favorite — to try to link her husband’s prosecution to the investigation by then-special counsel Robert Mueller into whether Trump’s campaign colluded with Russia in the 2016 presidential election.

In speaking previously about Blagojevich, Trump sought to tie the former governor to figures in the Justice Department who the president has sought to criticize for investigations of the administration.

In August, of Blagojevich, Trump said, “And a lot of people thought it was unfair, like a lot of other things — and it was the same gang, the Comey gang and all these sleazebags that did it.”

The president was referring to former FBI Director James Comey, a frequent Trump target who he contends sought to politicize the nation’s top law enforcement agency in the 2016 election in which Trump faced Democratic nominee Hillary Clinton. After taking office, the president fired Comey amid the investigation into Russia’s interference in the election and whether the Trump campaign was involved.

The president’s comments mirrored what Patti Blagojevich has said in not-so-veiled attempts to link her husband’s prosecution to some of Trump’s perceived political enemies.

In reality, Comey was in private practice from 2005 to 2013 — virtually the entire time Blagojevich was investigated and prosecuted. And Blagojevich’s prosecution was launched by a Justice Department under the George W. Bush White House.

Republicans in the state had previously warned Trump against acting to free Blagojevich, already facing a serious disadvantage in Illinois in the 2020 presidential election year, having lost the governor’s mansion and the wealth of Bruce Rauner in 2018.

Trump lost Illinois to Democratic presidential nominee Hillary Clinton by 17 percentage points in 2016 and two congressional seats in the traditionally Republican suburban and exurban region shifted to Democrats in 2018. That put Democrats with a 13-5 advantage over Republicans in the state’s congressional delegation.

“It’s important that we take a strong stand against pay-to-play politics, especially in Illinois where four of our last eight governors have gone to federal prison for public corruption,” the Republican congressmen said in a statement following Trump’s August remarks.

“Commuting the sentence of Rod Blagojevich, who has a clear and documented record of egregious corruption, sets a dangerous precedent and goes against the trust voters place in elected officials. We stand by our letter and urge the president to not commute Rod Blagojevich’s sentence,” it said.

“He’ll be able to go back home with his family after serving eight years in jail, that was a tremendously powerful, ridiculous sentence in my opinion.”