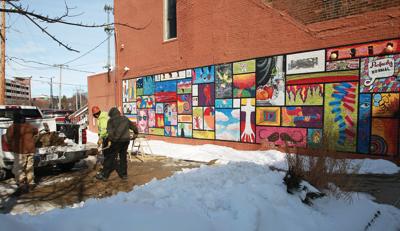 The uptown Mural is safe from deconstruction, but it's still leaving Uptown.

Talks of renovations to Uptown Normal began in 2018 and residents took issue with the tearing down of the artistic mural. Numerous activist groups spawned online to save the mural and other historic sites. Illinois State University sophomore Addison Graham shared his thoughts on possible damages to the mural.

“The mural completes Uptown and adds to the uniqueness of the scene. Removing it will be a sad sight to see," Graham said. "I understand some will benefit from the space by means of reconstruction or other things, but from the point of view of a student it would only take away from the beauty of Uptown and not add."

There was a lawsuit to stop the deconstruction that was dismissed by a judge in late January. Luckily, town officials promised to move the mural away from Uptown Normal instead of demolishing it. The mural will instead be relocated.

The mural will be relocated north of Uptown Circle and will be redisplayed behind the city’s water department. Normal City Manager Pam Reese told The Pantagraph that there are plans to relocate the mural in the near future.

"I believe they plan to get underway in the spring," Reese said. "Certainly, we've spent a lot of time working with the Farnsworth Group in trying to put a plan together in relocating it. That's been our plan for almost a year."

Construction workers will have the issue of removing the load bearing wall that the mural is painted over without damaging it in the process. If they do that, then residents of Normal will have the ability to sue the city for damages.

“The mural completes Uptown and adds to the uniqueness of the scene. Removing it will be a sad sight to see."

While settlement talks continue, the fate of the Uptown Mural is still unclear.