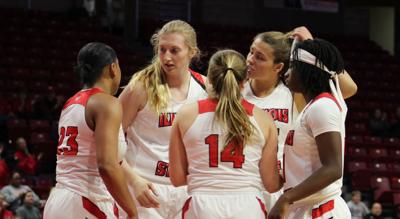 March is one of the most exciting times of the year for most sports and this Hoops in the Heartland Tournament looks to maintain the hype.

The madness for No. 4 Illinois State begins at 2:30 p.m. Friday when it takes on the No. 5 Bradley Braves at the Taxslayer Center in Moline, Illinois.

Although the Redbirds come into the game as the higher seed, they are not necessarily the favorite to win. The Braves hold a pair of double-digit wins over the ‘Birds this season.

This trend continued to the matchup at Bradley on Feb. 22. Foul troubles from the Redbirds put the Braves to the line where they scored 25 points. The Redbirds finished with only 10 points from the line.

During the teams' second matchup, the Braves locked down the ‘Birds best players. Goods averaged over 17 points a game, but the Braves limited her to just 14 points. Maggett managed just 10 points while averaging almost 16 points a game.

In the bigger picture, stopping the No. 1 Drake Bulldogs from winning a third straight MVC title will not be an easy task.

The reigning champs come into the tournament as the favorite to win after compiling a 17-1 record in the MVC, good enough for the number one seed.

The Bulldogs' solid season extended past the MVC. Since the end of November, the Bulldogs have been a nationally ranked team as they broke into the rankings at 24 and stayed ranked to finish the season at No. 21 in the nation.

If one team has the best chance at knocking off Drake, it would be Missouri State. The Bears gave the Bulldogs their only loss in the MVC on Feb. 1. in which the Bears took the win thanks to a fourth quarter that they outscored the Bulldogs, 32-16.

Valparaiso will take on the Bulldogs after a 79-77 win over the Indiana State Sycamores on Thursday. Given an upset, the winner of that game will play the winner of either the Braves or Redbirds.

The No. 7 Loyola Ramblers took down the No. 10 Evansville Aces 90-80 in game two on Thursday. The Ramblers will now take on the No. 2 Bears. Missouri State won each previous matchup by more than twenty points.

Game six will see the No. 3 Northern Iowa Panthers take on the No. 6 Southern Illinois Salukis. The Panthers swept the season series against the Salukis.

JAKE SERMERSHEIM is a Sports Reporter for The Vidette. He can be contacted at jerme@ilstu.edu. Follow him on Twitter at @JackSermersheim

Illinois State’s motto of “once a Redbird, always a Redbird” remains true for one women’s ba…

Redbirds advance to semifinal with win over Bradley

In two previous matchups this season, the Illinois State women’s basketball team struggled mightily in slowing down the high-powered, high-sco…