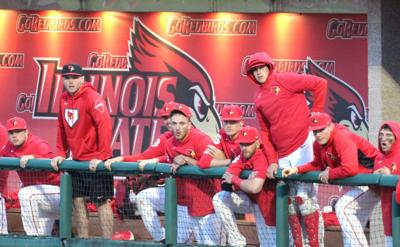 Despite opening the weekend on a high note with a 6-3 win, the Illinois State University baseball team game dropped the series 2-1 against the University of Louisiana Monroe.

“This is a tough series for us. Colton (Johnson) set us up with a great chance to win the series with his performance on Friday night,” ISU head coach Steve Holm said.

“We obviously did not play too well on Saturday, but we pitched extremely well on Sunday with the wind howling out to left. Unfortunately, they got four balls up in the wind stream and we got one up there. That was the difference.”

The Redbirds struck first with an Aidan Huggins RBI single.

But ULM responded quickly. In the bottom of the fourth inning, the Warhawks tagged starter Sean Sinisko for three runs thanks to three solo home runs that caught the strong wind blowing to left field.

The next inning Mason Holt smashed his solo shot.

ISU’s bats were cold until the ninth inning. Catcher Tyson Hays led off the inning with a lead-off home run off ULM Landon Longsworth. ISU was unable to do any more damage as Longsworth retired the next three batters in order to end the game.

Both teams' bats were hot in the second game of the series. The Redbirds found themselves up 5-4 after four innings.

After a scoreless inning from Bryson Warble, ULM came back to score four runs to take their first lead of the game.

The Warhawks did not look back as they rattled off 11 runs en route to a 26-run game.

After grabbing a pair of runs in the second inning, junior transfer Braedon Blackford added to the Redbirds’ lead with his second home run of the year to put the Redbirds up 3-0.

A pair of unearned runs got the Warhawks on the board in the third inning. A fielding error from short stop Joe Butler allowed the runs to score.

ISU responded with one run in the next three innings ending the Warhawks hopes 6-3.

With the 2-1 series loss, the Redbirds move to 3-7 on the season. The Redbirds are back in action 3 p.m. March 3 at when they travel to Baum-Walker Stadium in Fayetteville, Arkansas.

Redbirds grab one away game against No. 23 Oklahoma

Last spring, the Redbirds shocked the conference — and the nation — in taking the Missouri V…