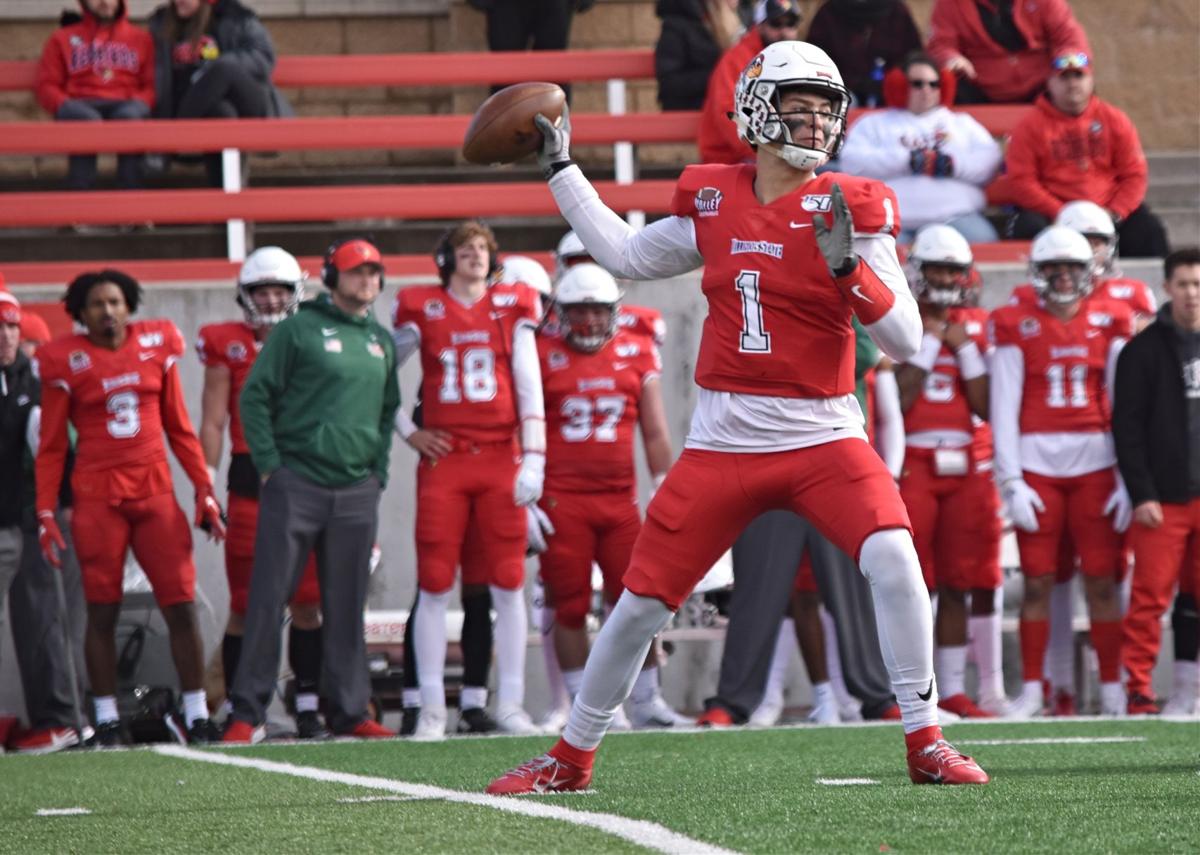 Illinois State suffered a tough loss to the University of Northern Iowa, 27-10 on Saturday Nov. 2 at Hancock Stadium. The ISU bench looked glum as UNI scored their second touchdown. The Redbirds look to win their next game against the Jackrabbits in South Dakota next Saturday. 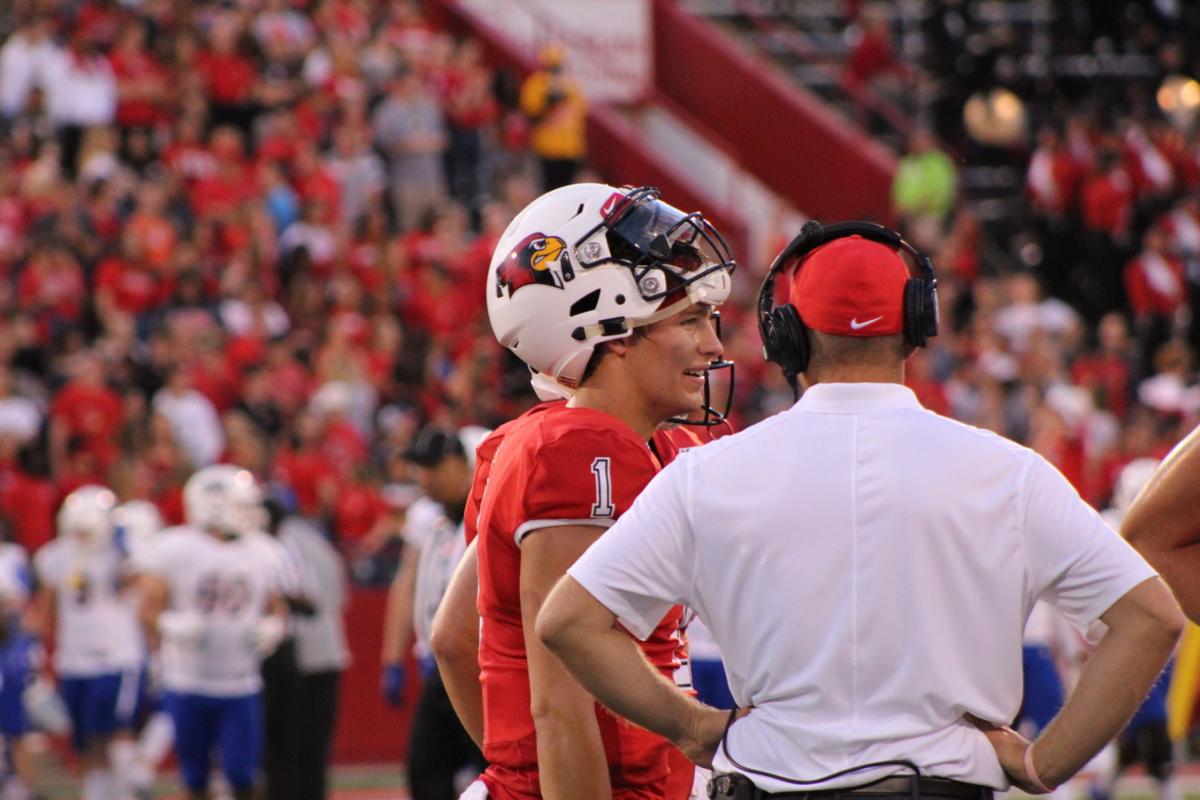 Quarterback, Brady Davis (No. 1), has words with head coach Brock Spack after an unsuccessful play. The Redbirds defeated Morehead State at Hancock Stadium, 42-14.

Adversity is something that can strike an individual in a variety of forms, sometimes more than once.

It can sometimes be a daunting task, but if handled with a certain outlook, one can choose to use these hardships to their advantage and shape their future to become better than before.

This is the mindset of Illinois State quarterback Brady Davis.

After leading the Redbirds to a 7-3 record in the 2019 season, Davis injured his left knee in the final home game against Missouri State on Nov. 16 just two games before the playoffs were set to begin.

The result of the injury was a torn ACL, the same injury Davis suffered during his playing days at Memphis where he missed the entire 2016 season.

Davis later transferred to Illinois State for the 2018 season where he earned the starting quarterback position and was named MVFC Newcomer of the Year after finishing with 1,935 yards, 19 touchdowns, and just five interceptions.

The promising first year with the program had many excited for this past season where the Redbirds were in position for a postseason run, but many injuries to the team, including the season-ending injury to Davis changed the outlook.

Now Davis finds himself in the midst of another injury comeback, but rather than dread at the thought, the quarterback has his head held high, keeping a positive attitude throughout the process.

The Amory, Mississippi native explained he was a little nervous at first when the thought occurred of a re-torn ACL, but Davis quickly used his previous experience to his advantage this time around during the rehab process.

“I plan to be a better athlete and a player than before,” Davis said. “When it happened I was a little scared, but that fear passed probably after about 30 minutes. About three or four weeks after the injury I was able to lift weights like I was getting ready to play, and I think it really helped going into the surgery. Since then it’s been pretty easy without much pain compared to the first injury where I felt like I couldn’t do much.”

Davis will enter the 2020 campaign in his sixth season as a NCAA athlete. The circumstance is rare in college athletics, but the opportunity to take the field as a seasoned veteran amongst his teammates and competition is one Davis will relish.

“I think one of the things that helps is finding ways to win tough games through injuries and that kind of stuff like this last year is part of that,” Davis said. “As a team we have a lot of experienced players and we’ve learned a lot these past few years, and I think it’s all coming together for us so we’ll be able to get it rolling again once we all come back together.”

Another advantage to being sixth year athlete is knowing how to handle the criticism that comes with being a college quarterback.

It is arguably one of the toughest positions in all of sports, because when things are going well the QB can be praised, but when a struggle occurs, the fan-base will let surely let them hear their frustrations.

Rather than focusing on silencing critics for his own reasons, Davis would rather put his energy on and off the field towards something else. Winning football games.

“I love the feeling of taking a knee for the win. That’s what motivates me, I just want to win for my teammates, for this town and this program. Those critics are always going to be there but it doesn’t bother me because I’m my own hardest critic.”

One member of the team who’s put an emphasis on this concept of focusing on winning instead of the outside noise is the man in charge, head coach Brock Spack.

Davis explained the relationship between himself and Spack is one that goes beyond the football field during their time together at Illinois State.

“He’s a good family man and a great guy to have leading your program,” Davis said. “He does a lot to help everybody on the team and makes connections with us. Same goes for all the coaches we have, but that’s how are team is and I think that’s what make it special.”

In the midst of the training during his comeback from injury, there is another type of adversity that has hit not just Davis, but the entire globe. This has come in the form of the COVID-19 pandemic which has put a halt to all college athletics for the time being.

It’s been an unusual time during the college football offseason, but it has not stopped Davis from continuing his work. After surgery in December, team doctors have estimated an eight month rehabbing process which the quarterback believes he is ahead of schedule.

“It’s definitely been a litte weird, but when this outbreak started and it got to the point where all these lockdowns started to happen I was at the stage of the recovery process where I was doing a lot of running to jumping, and lifting weights like at the point where you’re getting ready to start playing football again,” Davis said. “I’m doing all this at a high level and I’m feeling great and I feel like I can play a game today.”

If the NCAAF season does resume as scheduled, Davis and his teammates are eager to pick up where they left off and continue to improve on their play from a year ago.

The Redbirds reached the quarterfinals before bowing out to their conference rivals and eventual champion North Dakota State by a final score of 9-3.

“Coming into this season I want to play well enough to where we’re in position to win football games and eventually a national championship. With this team we have, we know we can be dominant and win every Saturday.”

A few of the pieces from last season the Redbirds will be without have the opportunity to continue their careers in the NFL. Running back James Robinson signed with the Jacksonville Jaguars and defensive back Luther Kirk with the Dallas Cowboys shortly after the conclusion of the 2020 NFL Draft.

“It’s awesome to hear because those are two of the best teammates I’ve ever played with,” Davis said. “I think they’re going to play this game a long time because I know the kind of players they are and I’m excited to see them on the field making plays.”

The journey to the NFL by the former Redbirds is one Davis hopes to follow at the end of this season, regardless of the outcome the soon to be sixth year quarterback has plans to stay in the realm of football in the form of coaching or along those lines.

“I would definitely like to be in their shoes, with my injuries it’s going to be an uphill battle for sure and I’ll have to play well this season which I fully intend to do,” Davis said. “I’m going to give it the best shot I have to play as long as l can. Whether it be coaching, or scouting, or whatever it would be, I’ll always be in some gym shorts around the football field because it’s done a lot for me and I feel like I can give a lot back.”

Up to this point the football ride has had its share of ups and downs. Yet regardless of the adversity Davis has faced, his positive outlook on life has put in him in a position to be better than before in whatever he chooses to do after his final season, as he continues to look ahead, into the future.

A workhorse running back for the Illinois State Redbirds, James Robinson fares to be a late-…

Inducted in the 54% completion percentage

One time MVFC Offensive Player of the Week (2019)

Sermersheim: Longing for sports, what does future hold after COVID-19

April 2020 will always be remembered as a month without sports.

Illinois State football head coach Brock Spack and his team have goals to grow the season ticket fan base after a successful 2019 campaign.