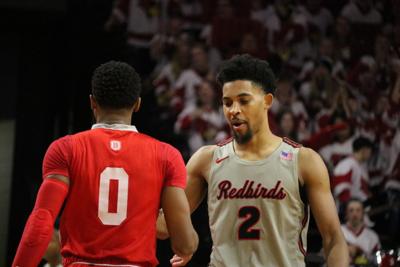 In the second edition of the 2020 War on I-74 rivalry, confetti were flying, both fan bases were present, and things got heated relatively quickly at Redbird Arena. The two teams could not finish their business in 40 minutes, as overtime was needed to settle this clash.

. @Redbird_MBB hits their first triple of the night and the Illinois St. fans toss confetti into the air like they do for every matchup against Bradley. pic.twitter.com/UjbJhFzdmK

ISU head coach Dan Muller was obviously frustrated after a lackluster 19 turnovers cost the Redbirds the game to their archrival Braves.

“It’s the 30th game of the year or whatever, I think we were careless with the ball. Would we have been careless if it were a tie game? I don’t know. Did we get careless because we were up? I’m not sure, but it definitely hurt us.”

Keith Fisher III was a man on a mission throughout the game, as he totaled 23 points on 8-of-13 shooting. Zach Copeland was also a guy who stepped up late, as he hit three free throws to tie the game, sending it to OT.

While Copeland stepped up late, the remainder of the game was ugly for the senior guard. On the night, Copeland went 3-of-19 from the field, and Muller had trouble justifying the thought process.

ZACH COPELAND. The senior hits 3️⃣ clutch free throws to tie the game at 67 with under 10 seconds on the clock!Bradley ball with 6.2 seconds to go in regulation.#REDBIRDhoops

“He’s got to make better decisions at the rim. I thought he was good defensively, but he’s got to have some more patience on the offense end when he’s being guarded well,” Muller said.

In overtime, defense played a primary role in the five highly contested minutes. Bradley was able to score seven points to ISU’s four. In a crucial moment, Jaycee Hillsman stepped to the line with the chance to tie the game at 72 but was only able to hit one of his two free throws, eventually costing the Redbirds the game.

“I normally feel pretty good about my free throws every time I shoot it. I gotta make those type of shots. I’m disappointed in myself, let my team down, however, we will be better from it,” Hillsman said.

While the rivalry was as hot as ever, the Redbirds looked to put away the Braves quickly. Building up two leads that reached 12 points in the first and second half had Bradley reeling.

Scrappy play was a key to the Braves comebacks, but two technical foul calls on Darrell Brown (first half) and Nate Kennell (second half) for various reasons of unsportsmanlike play did not help the Braves chances.

“I told the guys to keep your mouth shut and let me do the talking to the referees,” Bradley head coach Brian Wardle said.

Even with the extra trips to the free throw line and the exceptional shooting of 25-of-30 from the strip, the Redbirds were still unable to hold the Braves down. Hillsman elaborated on what his mindset was in both leads.

“Sometimes we’re playing keep the lead instead of playing the game,” Hillsman said.

Wardle admitted that their main goal early was to attack the paint as they did in Peoria earlier this year, but Muller wasn’t having it. Wardle had this to say after the game:

“We wanted to (score in the paint), I thought they did a great job. Illinois State played well; they have played well at home this year. We knew that we were gonna come in and this was going to be a war, the War on 74,” said Brian Wardle.

Wardle finished the press conference by saying, “I would not want to play them in St. Louis.”

The Redbirds end the season finishing 9-6 at home, the worst record under Muller. With one game left on the docket, the Redbirds look to pick up their first road win on the season at 1 p.m. Feb. 29 as they take on the Panthers at Evansville.

With the season winding down and the No. 9 seed clinched, all the Illinois State University …

Redbirds hang on to defeat Drake 57-53 on Senior Day

Retro Night took over Redbird Arena on Saturday night, as members of the 1000-point club in …

For the second straight day, the Illinois State University men’s basketball team has taken a…

It took the final game of the season for the Illinois State University men’s basketball team to get its first road win of the season Feb. 29.

After a troublesome season for Illinois State University, the Redbirds enter a play-in game versus No. 9 Drake on Thursday as underdogs.While …