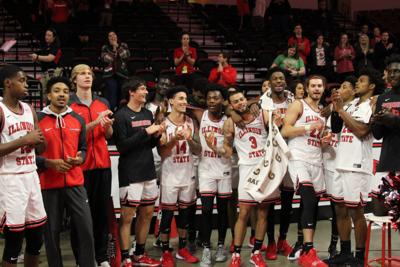 The Redbirds opened MVC play against the University of Northern Iowa, winning 76-70 on Dec. 31. But that new mentality did not last long as the ’Birds slipped back into their sloppy play from the non-conference season dropping three straight games.

After the strong opening win against UNI, the ’Birds slipped against the Southern Illinois-Carbondale Salukis on Jan. 4, falling 67-55 in a game that saw the ’Birds struggle in nearly every aspect.

Returning home against Missouri State on Jan. 7, the ’Birds had a chance to take down the Bears, but undisciplined play led to the Bears handing ISU a 67-63 loss.

Road struggles continued for the ’Birds. Traveling to Terre Haute, Indiana, to take on the Indiana State Sycamores. Despite playing solid defense, the ’Birds fell 65-52 in one of their worst offensive showings of the season. The loss marked the fifth straight road loss.

Freshman DJ Horne leads the ’Birds averaging 12.8 points a game in MVC play. Horne has been one of the few ’Birds with consistent play. Horne opened conference play posting 22 points against UNI. Horne also posted 11 against Southern, zero against MSU and rebounded for 18 points against the Sycamores.

Senior Jaycee Hillsman has come on recently through conference play. Ranking third on the ’Birds with 10.8 points per game in conference thus far.

Coming into the season, most expected returning starter senior Zach Copeland to be a leader for a young team. Copeland had stepped into this role earlier in the season, but a lack of discipline has led Copeland to head coach Dan Muller’s dog house.

Copeland did not start against the Sycamores after starting the second half on the bench against the Bears. Against Indiana State, Copeland once again struggled, shooting 3-10 in the loss.

So far into MVC play, Copeland has struggled to keep the ball as he leads the team with 17 turnovers.

Copeland has had some upside as he is second on the ’Birds with 12 points per game but has irritated Muller as he cited Copeland’s play as “playing on his own.”

The MVC has not shaken out how many expected it to. Preseason No. 1 MSU currently sits at seventh. Bradley remains in their preseason ranking of second. UNI sits in first despite losing to the ’Birds after being named third in the preseason poll. The ’Birds sit in ninth off their seventh-place projection.

Before the Illinois State University men's basketball team suits up to take on Indiana State 7 p.m. Feb. 8 at Redbird Arena, the ISU Athletics…