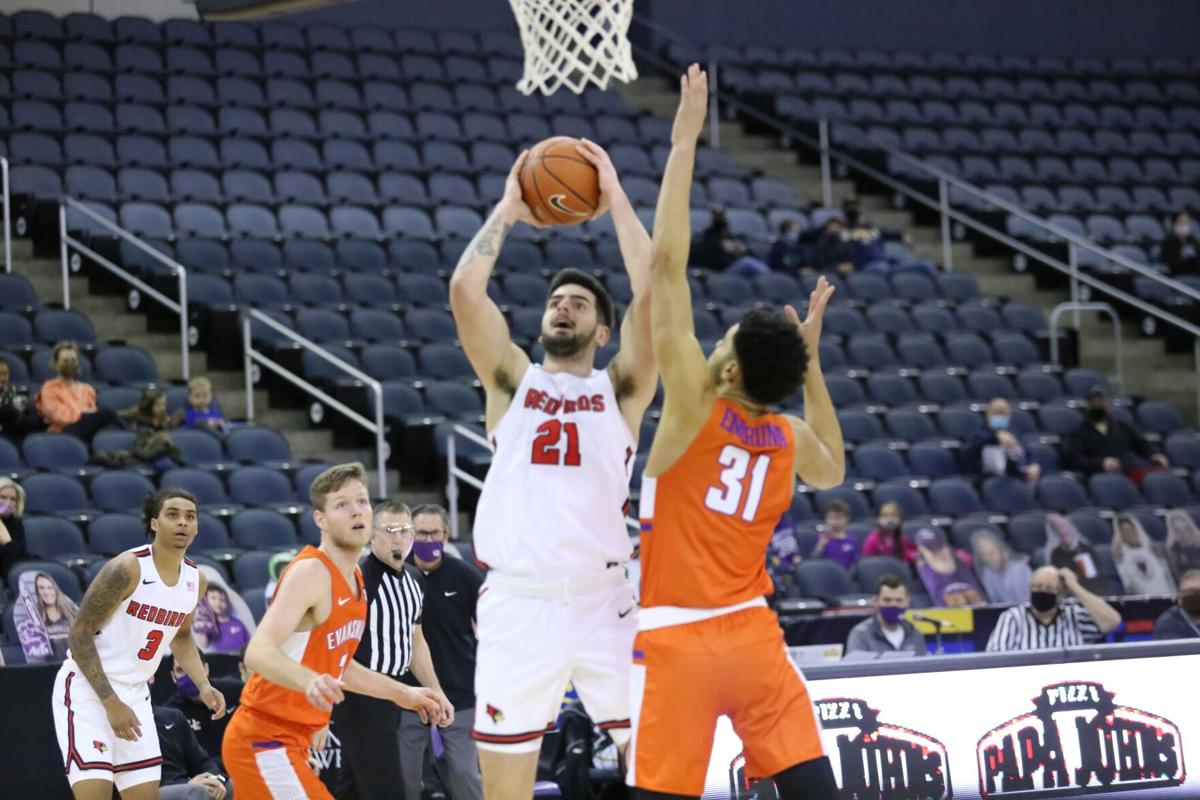 Illinois State junior forward Dusan Mahorcic going up for a lay-up in the Redbirds 73-68 win over Evansville last weekend. 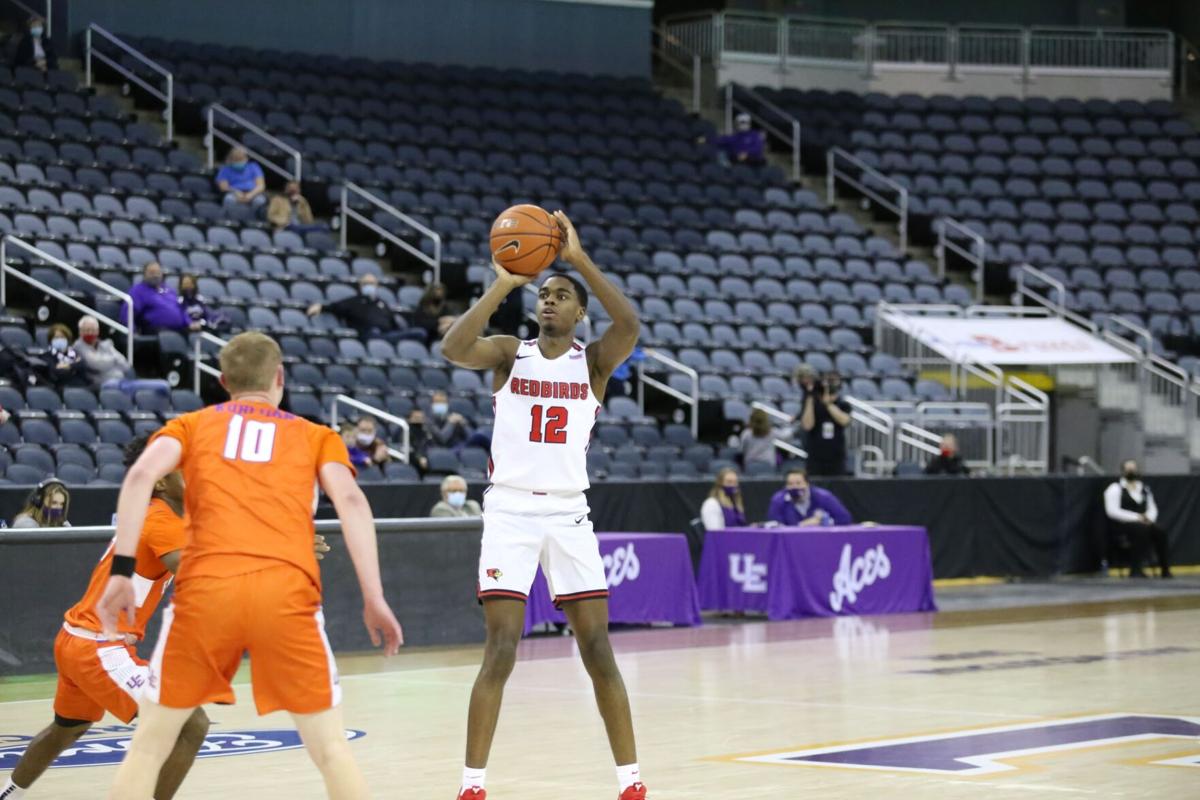 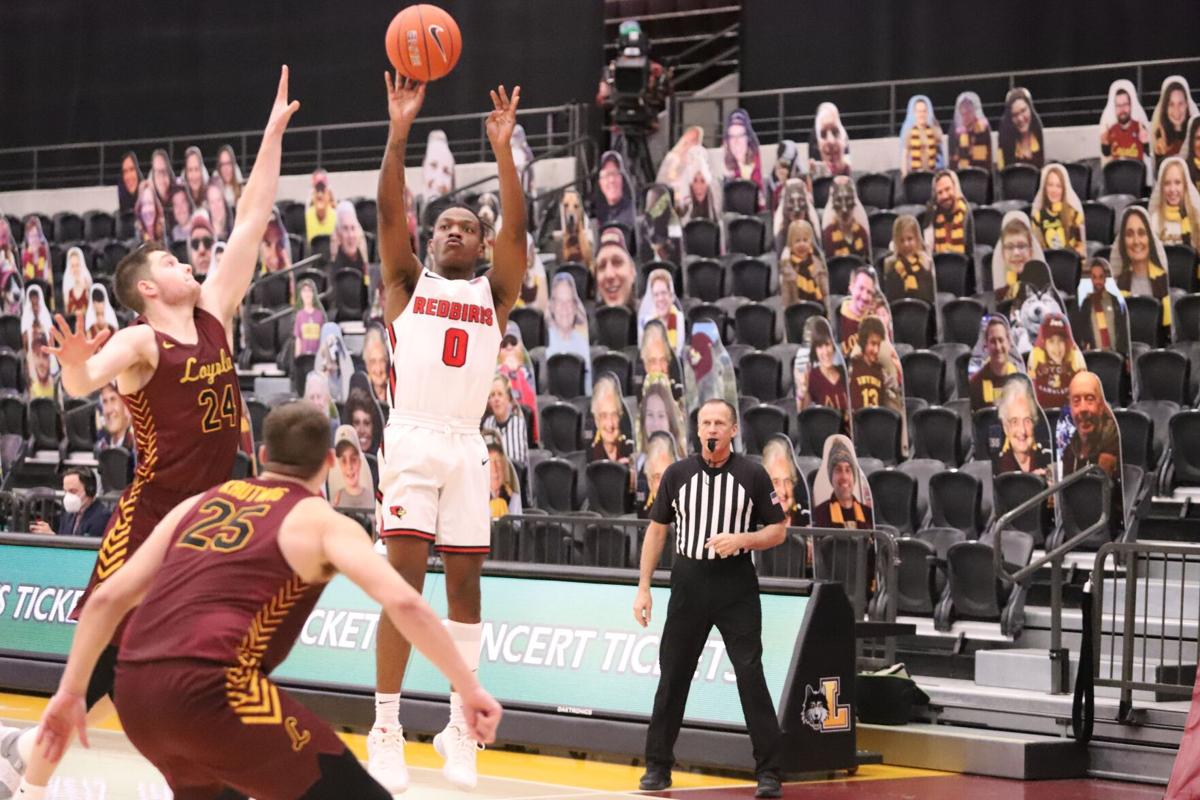 Illinois State sophomore point guard DJ Horne shooting a three during game two on Dec. 28 of the Redbirds series with the Ramblers.

At times, many were unsure if it would happen or not. Through COVID-19 outbreaks, schedule releases, re-releases, no preseason, limited practice and more strings of outbreaks, the Missouri Valley Conference men’s basketball season finally began at the end of December.

Like several other MVC teams, Illinois State University faced complications in the opening weeks of the conference season. The Redbirds faced an opening weekend sweep, adjusting to two-game series, postponed games and a 12-day break between series. Through the twists and turns of the young season, the Redbirds sit at 1-3 in the conference slate.

ISU opened the season with a two-game series at Loyola University Chicago with a pair of back-to-back rough showings. Loyola dominated the weekend with two 30-point victories. Despite DJ Horne posting back-to-back games with 15 or more points, there was little to celebrate in the Redbird’s opening weekend.

The Redbird’s MVC season took a sudden turn shortly after the Ramblers’ sweep. An outbreak of COVID-19 on Valparaiso University’s team would postpone the teams’ showdown on Jan. 2 and 3. The postponement meant that ISU would go 12 days in between games. ISU head coach Dan Muller used this to his advantage.

With the chance to play a nonconference Division I or non-DI opponent instead of Valparaiso, the Redbirds and Muller instead decided to get back some of the practice time taken by COVID-19.

“The best way to get better defensively is mindset, the second-best way is to train and to teach. Once they know what they are supposed to do is, it’s about competing and being on the same page and that’s the last one that takes the longest,” Muller said. “It is very challenging, and this is not an excuse but it’s the facts, it’s reality. They missed two months of summer workouts, and then the quarantines and you’re just behind. Then on top of that you lose confidence, you don’t grind it out consistently and build up that grit and toughness and that can be frustrating.”

ISU’s extra practice showed after the 12-day break concluded when they faced University of Evansville on Jan. 9 and 10. The Redbirds used the work on a zone defense that was not seen much in the nonconference season. Game one of the series saw the Redbirds stifle the Aces for a half before what Muller cited as a less intense second half leading the Aces to a 58-47 win.

Along with improved defense, five straight shots from Antonio Reeves helped dig the Redbirds out of a hole late in the second half. The Redbirds took home their first conference win of the season 73-68.

So far, during the conference season, ISU’s young guards have proven to be on-court leaders.

Prior to ISU’s matchup with the Aces, Muller called for sophomore guard Antonio Reeves to play more aggressively. This mindset worked for Reeves who led the Redbirds in both games over the weekend. Reeves opened the series with an 11-point showing before leading the Redbirds back with 21 points to close the weekend.

“I just lost it. I stayed in the game trusted my teammates, trusted the process. I was out there, was not thinking and it paid off,” Reeves said.

During the Loyola Series sophomore point guard DJ Horne led the Redbirds over the two-game series with 33 points (18 points in game one, 15 in game two). Opening the series Horne did not receive the starting nod after recovering from an ankle injury, but still paced the Redbirds. Horne added back-to-back 10-point contests against the Aces.

Indiana State comes to Normal for the first home series of the year for the Redbirds. The Sycamores come into the game with the record of 1-4. The Sycamores are fresh off their first MVC win of the season after beating Loyola. Both games are scheduled to begin at 4 p.m. on Jan. 16/17 at Hancock Stadium.

Sy Chatman opts out according to Muller

After a 12-day break, Illinois State University men’s basketball was unable to capitalize on…

PREVIEW: Recovered from Loyola-Chicago; Redbirds well-rested ahead of Evansville series

Eleven days removed from a forgettable opening series against Loyola University Chicago, the…

For the first time this Missouri Valley Conference season the Illinois State men’s basketball team will host a game at Redbird Arena.

It was not home sweet home in Illinois State men's basketball's return to Redbird Arena in over a month against Indiana State.

A Sunday afternoon game against Indiana State looked out of hand at the 4:00 minute mark in the second half, as the Sycamores just went on a 1…