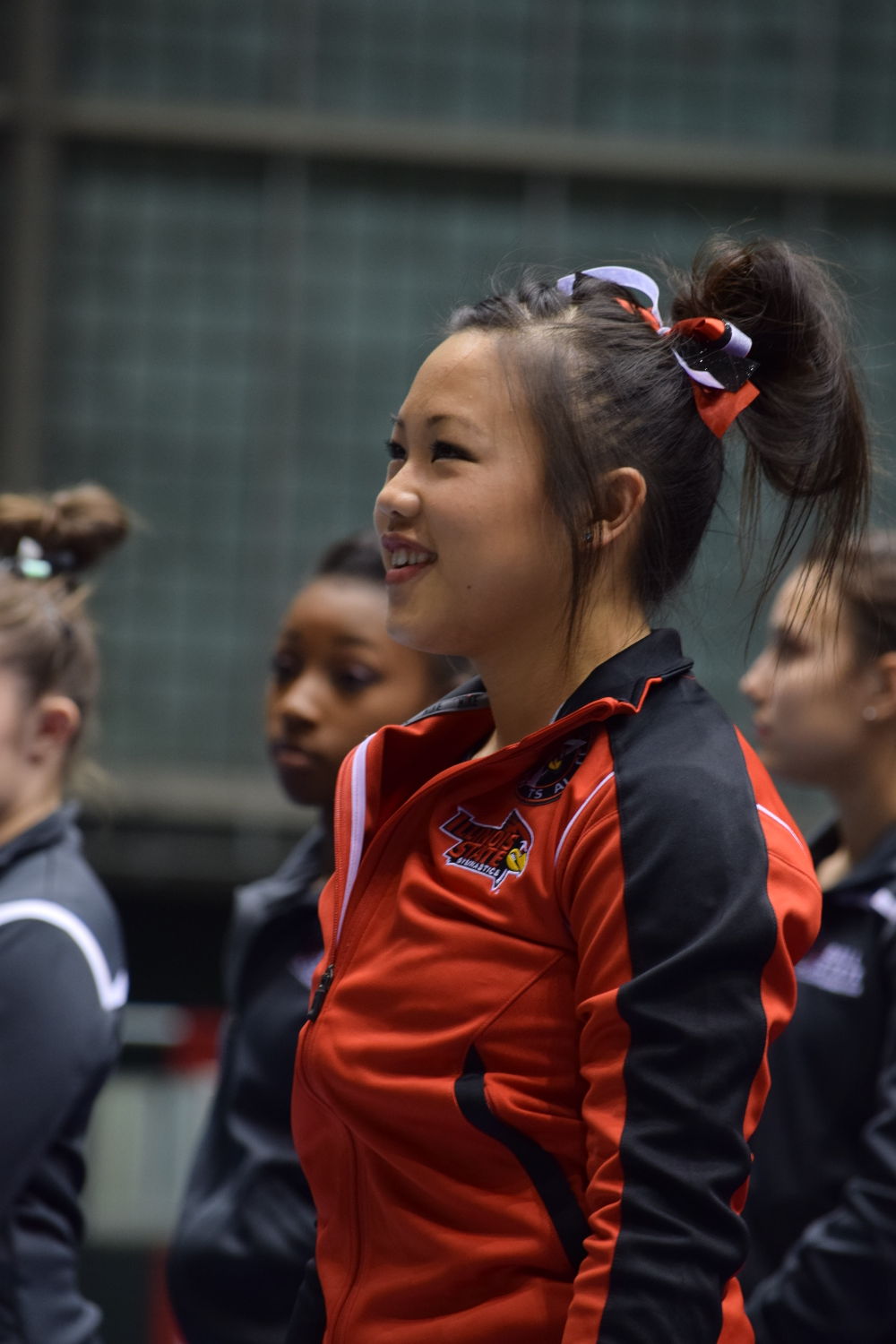 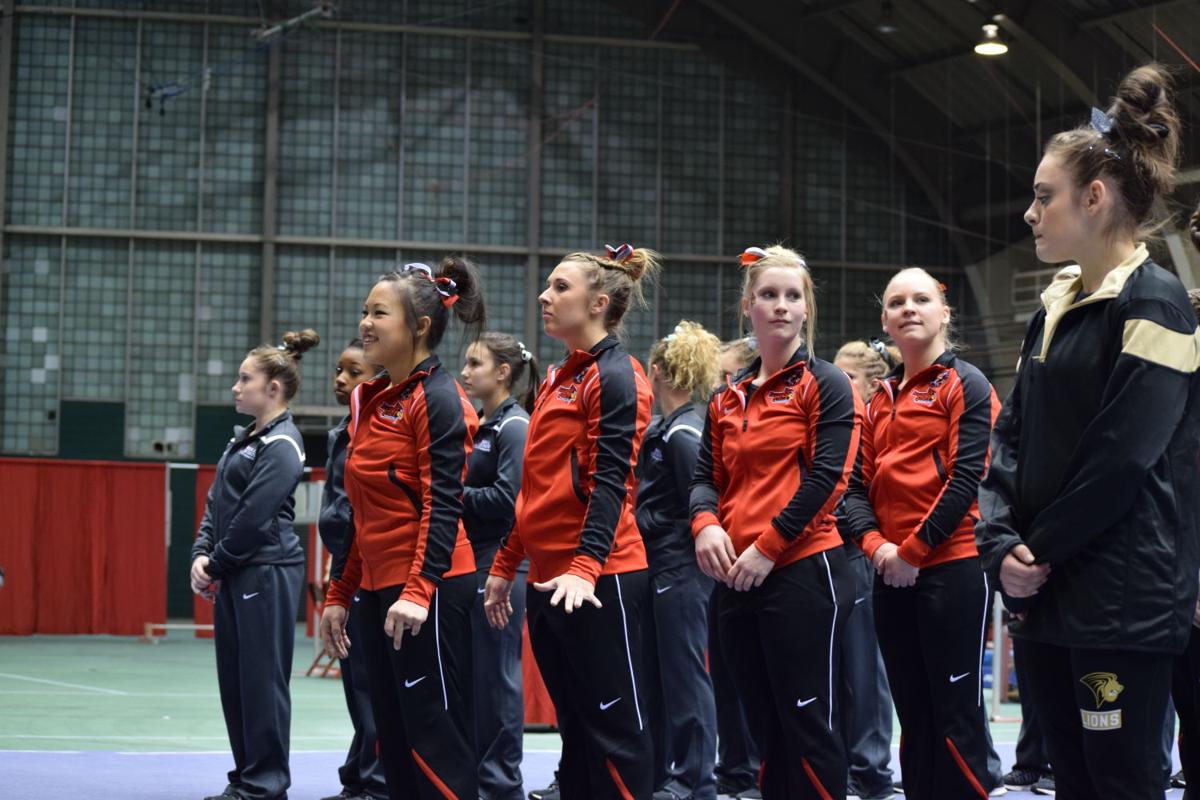 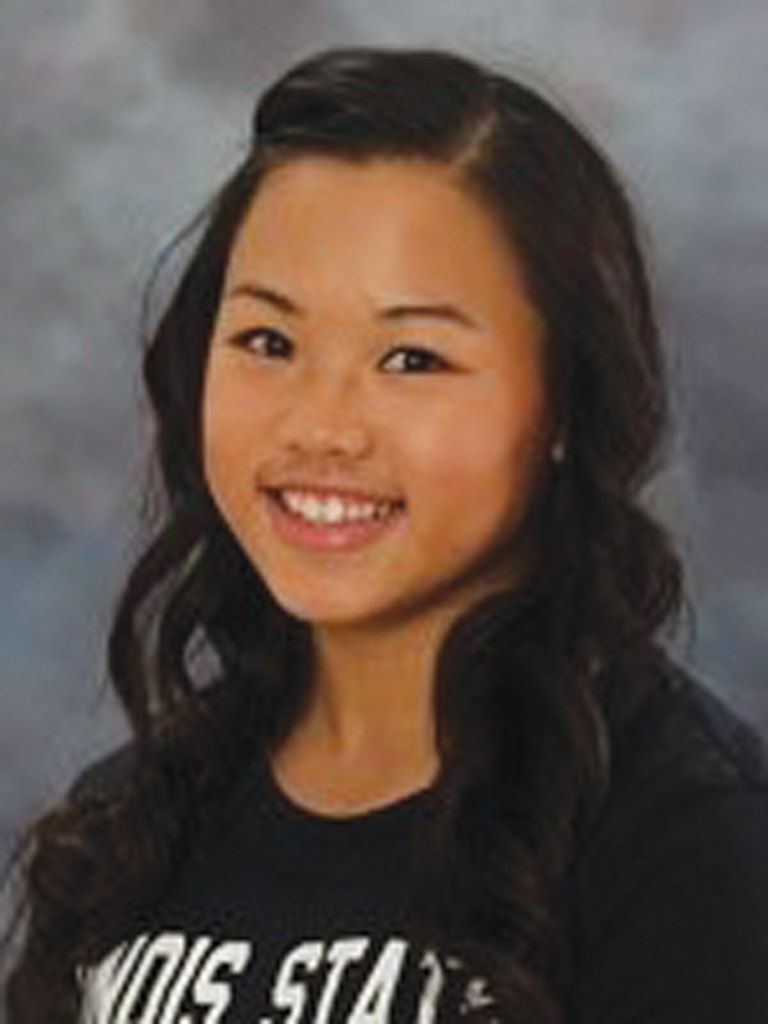 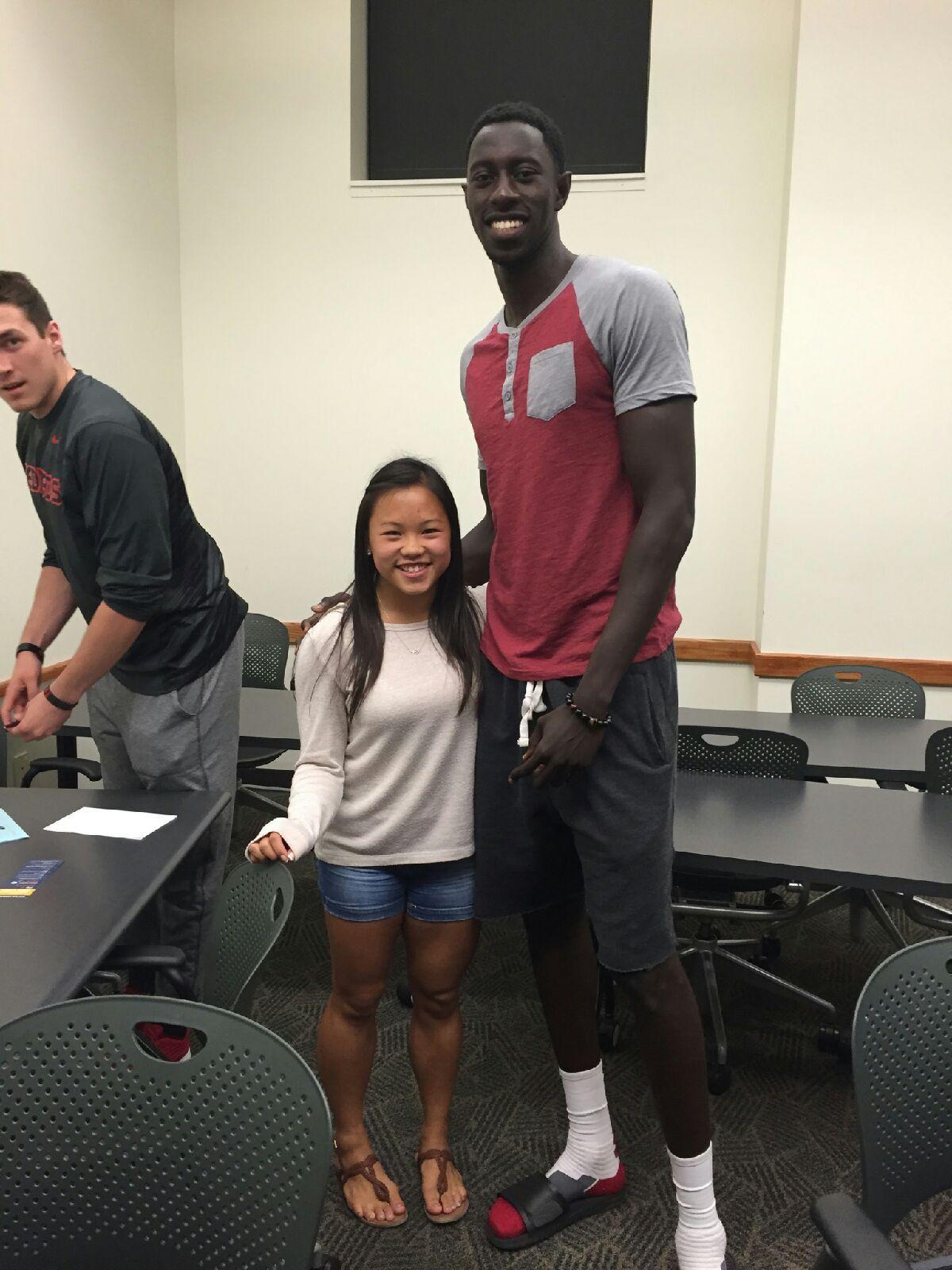 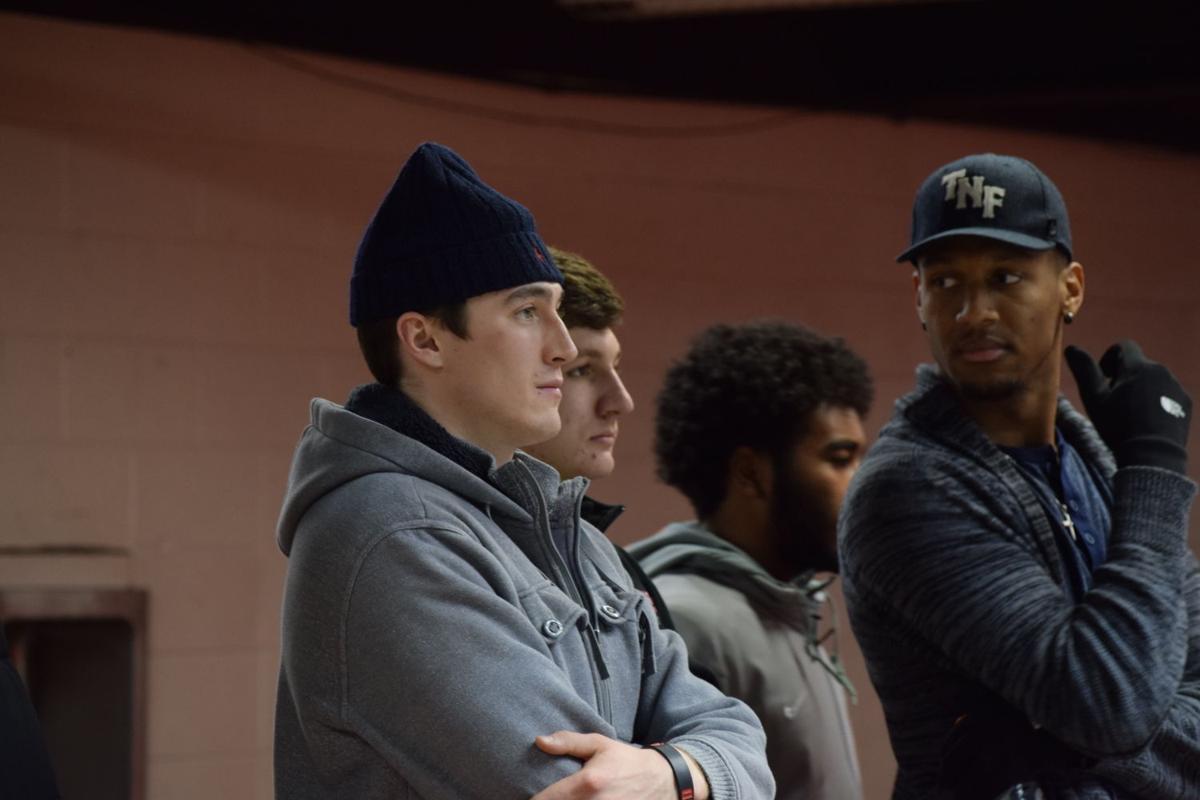 Growing up devoted to religion can be difficult in today’s society. Research has shown young people, more specifically college students, have strayed away from believing in God, a greater being or having faith all together.

Senior gymnast Danci Cha was raised in a religious family but it wasn’t until her senior year of high school when she realized she had a purpose in life and knew she wanted to continue progressing in her faith.

“I grew up going to church but I don’t think I was a Christian until the summer before college when I was encouraged to share a testimony.” Cha said. “I’ve never shared a testimony before, I was kind of just like, ‘okay it’s just a thing where you talk about God.’ It wasn’t until I actually sat down and reflected on how God had been working in my life. I really felt Him working in my life. I knew it when I decided to come to ISU.”

During her junior year of high school, Cha received interest and several offers from big-name programs including Arizona State, Arkansas, California and Ball State. The Milwaukee, Wis., native knew it would be difficult to maintain her relationship with God moving away from her family. She made it a goal to stay somewhat close to home.

Illinois State University gymnastics coach Bob Conkling invited Cha to ISU for an unofficial visit and she trekked her way down to Normal, Ill.

She arrived at ISU not all that impressed with the athletic department and its facilities, noting that Horton Fieldhouse – where ISU gymnastics meets are held – was older compared to other facilities. However, Cha enjoyed the company of Conkling and assistant coaches Stephen Avgerinos and Andrea Orris.

“Bob, Steve and Dre were really welcoming. They told me their personal stories and how they enjoyed their time at ISU. Dre told me all about her experience with ISU gymnastics. It made me look past the surroundings and I looked deep into the people within the program. They were all so nice.”

After her visit to ISU, Conkling offered Cha a full ride scholarship with a two-week time frame to make her decision. Despite interest from other universities in warmer climates or with better facilities, Cha made her decision and found her second home at ISU.

Cha knew arriving on campus, however, would still be a struggle. Along with moving away from home for the first time and being a devoted Christian, Cha is also of Asian decent. Currently, she is one of just two (Leia Atas, women’s golf) Asian athletes at ISU, which houses over 400 student-athletes.

Feeling isolated was an understatement.

“Coming onto campus, I realized how easy it was to quickly fall out of your faith. I was scared.”

Research shows college is a period of intellectual exploration and discovery of new activities, which over time has weakened one’s religious beliefs.

A recent study conducted by UCLA/ABC News discovered 52 percent of college students said they attended religious services frequently the year before entering college, but by their junior undergraduate year attendance had dropped to 29 percent.

The lack of a religious community at college did not stop Cha’s faith from influencing the way she lived on a day-to-day basis and how she competed. A health education major and public health minor, Cha knew she wanted to find an organization where she could feel comfortable with other college students of the same belief. During her second semester of her freshman year, she discovered the RSO, InterVarsity.

“I’ve had my ups and downs (with InterVarsity),” Cha said. “It was really hard to really find a good balance maintaining gymnastics, classes and InterVarsity. Back at home, I didn’t have to worry so much about everything. Back at home, I didn’t have as many obligations with gymnastics, it was just go to practice after school all the time. It wasn’t how it was now…with weights, traveling and maintaining a certain GPA. All of these details have played into walking the right path.”

But following that path is not always easy.

As Cha progressed with InterVarsity throughout her college career, she wanted to spread her faith with her teammates and fellow student-athletes.

It has been a tall task that Cha hasn’t shied away from.

Just this past week, Cha helped lead the first ever Athletes InterVarsity meeting in which she hosted a handful of ISU student-athletes.

“It’s been hard. It’s not me calling other people, it’s God. He works in mysterious ways and has allowed others to join and find Him. Last semester, it just so happened David Ndiaye and Justin McCloud came up to the InterVarsity table at Festival ISU. Courtnee Cossell came to a meeting one time and brought Rhianna Krutz. It hasn’t been my work, it’s His will.”

Amidst the grind and demands of being a Division I athlete, a handful of ISU student-athletes have been able to take a step back and gather as a community with a common purpose.

“It’s nice to find Athletes InterVarsity on our campus,” McCloud said. “Religion has always been a part of my life. I’m a believer and I try to carry that with me into every game. I’m allowed to be here and play basketball because of Him. I want to give Him praise in every way.”

“It’s great to know there are other athletes there who share that same interest in love. Hopefully, we can make this thing grow.”

Prayer and religion can be a tricky thing. It’s a tough problem when one feels disconnected from God or any higher being. Cha knows prayer doesn’t guarantee happiness, but instead paves the way for a deeper relationship with God and her faith.

From waking up at 5 a.m. every day to read her Bible, to numerous prayers and writing in her journal throughout the day despite a hectic gymnastics schedule, Cha always finds time to mature and grow spiritually. Her coach praises the attitude and mindset she’s brought to the team.

“Danci is such a joy,” Conkling said. “She’s so fun to watch on the floor being such a talented athlete. She’s always been firm in her beliefs outside gymnastics and that is something the entire team respects. I’m really pulling for her and she deserves to be successful her senior year.”

ISU gymnastics has been struggling this season and is currently in a funk, placing third in its last two meets. With plenty of room for improvement for all the gymnasts, Cha avoids letting her performance define her. Rather, gymnastics and spreading awareness among ISU athletes is a platform for her to share her faith.

“The biggest challenge is feeling a sense of dissonance. It’s hard being so different than everyone. I’m the first generation in my family going to college. This is something kind out of the ordinary. Feeling disconnected from my team, athletics in general and on this campus.”

“Religion might not be seen as important as it used to be, but being part of this new community I know there’s a bigger purpose for me being here. I’m doing the best I can to take full advantage of my opportunity and the rest of my time here.”

With Cha’s expected graduation this upcoming May, the future of Athletes InterVarsity and its presence on campus appears foggy at first glance. McCloud described Cha as the “most positive and happiest person” he has ever met. Cha’s personality, obedience to her faith and care for her fellow peers shows the influence she wants to leave behind.

“My biggest goal for Athletes InterVarsity is to create an environment and an atmosphere for other athletes, no matter what teams they come from,” Cha said. “Being able to support each other and not feel completely isolated.”

Whether one is religious to any extent or not involved with religion at all, Cha’s mindset will bring a smile to any face.

Athletes express their faith on the field or in the gym in a variety of ways. Whether it be pointing to the sky after a made basket, a silent prayer after celebrating a touchdown or locker room meditation, athletes all over the world show praise in many different ways.

Although a handful of ISU student athletes are treading in unfamiliar ground in starting up Athletes InterVaristy, they maintain a positive outlook.

Treat others how you want to be treated. For Danci Cha, it’s simple. It comes down to influencing others more than they have influenced her.

Josh Tolentino is a junior journalism major and sports editor at The Vidette. He can be reached by email at jtolent@ilstu.edu and found on Twitter @JCTSports.

Josh Tolentino is a junior journalism major and Sports Editor at The Vidette. He can be reached by email jtolent@ilstu.edu and found on Twitter @JCTSports