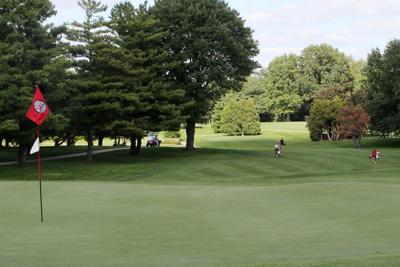 Illinois State University senior David Perkins once again led the Redbirds, carding his ninth sub-par score of the season. His third-place individual finish helped the Redbirds secure a tie for seventh place at the 2019 Bearcat Invitational.

Perkins has been under par in each round he has played this season. At the Bearcat Invitational, he carded an eleven-under par, a three-round total of 202 (67,68,67). Louisville’s Ryan Murphy finished as the individual medalist just six strokes ahead of Perkins at 196 (67,66,63).

The Redbird team was rounded out by freshman Felix van Dijk who finished tied for 39th with a three-round total 220, junior Dan Anfield who tied for 51st with 223, senior Joel Durnford who finished 66th with 228 and freshman Parker Wisdom who tied for 67th with a score of 230.

The Redbirds have nearly a three-week break from competition before teeing off on Oct. 21 at the Little Rock Intercollegiate in Little Rock, Arkansas.

The Illinois State University women’s golf team tied for 10th place in a strong field at the Johnie Imes Invitational, hosted by the Universit…

It has been a year to remember for Illinois State University senior golfer David Perkins. Just a couple weeks after earning his first medalist…

Senior ISU golfer scratching his way to the top

The weather Thursday was less than picturesque. The sky was filled with dark clouds, promising rain and bringing a constant wind that dropped …

The Illinois State University men’s golf team rallied back in the last round to win the 27th annual Little Rock Intercollegiate Invitational.