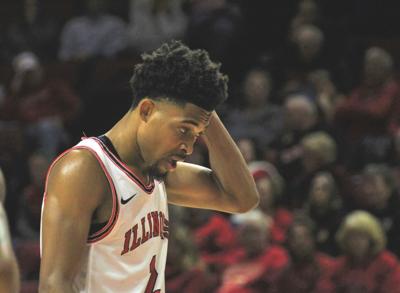 Despite extending its road losing streak, the Illinois State University men’s basketball team showed signs of progress in its 84-74 loss at Drake. The loss also extended the Redbirds’ losing streak to four games.

But even though the ’Birds came up short, the ’Birds played a cleaner offensive game. But the Redbirds’ defense let down as the Bulldogs were unable to guard their size and allowed 44 to 24 scoring in the paint.

"We spent more time in practice focusing on the offense, so it makes sense that we would play worse defensively,” ISU head coach Dan Muller said. “Going to play on the road anywhere is tough, teams play and shoot better in the front home crowd. There is a reason they have won 14 straight at home.”

Early on the ’Birds showed a strong fight. Despite letting the Bulldogs go up on a six to nothing run, the ’Birds fought back with a seven-point run of their own.

The two teams exchanged the lead throughout the first half.

A rebound game from senior Zach Copeland was key in ISU’s offensive resurgence.

A career-high 34 point performance from Copeland was much needed, as he had recently found himself in head coach Dan Muller’s dog house. Struggling with 17 turnovers through four Missouri Valley Conference games Copeland did not start in the Redbirds’ 65-52 loss to Indiana State.

Starting once again against the Bulldogs, Copeland did not have an offensive turnover.

“I was keeping it more simple, keeping it out of traffic. I was trying to just make the right play. Going back to the first games of the season I was making the right plays and our offense was working better. Everyone feels more involved.”

After falling off the path that Muller wanted him to play Copeland looked to improve the offense through himself.

“Today I wanted to set the tone for moving the ball on the offense. I felt like the last few games we were not moving the ball and that is on me,” Copeland said. “I am the head of the snake and I feel like I need to produce and get other guys involved.

A balanced team led the Redbirds’ fall. The Bulldogs had six players in double-digit scoring including from their five starters.

Defensively the ’Birds kept up with the Bulldogs until the midway point of the second half.

“We had some bad stretches where they went on long runs. We were not communicating which translated to us falling behind on the transition,” Copeland said. You cannot win like that on the road.”

With the score 59-56 with 11:45 left in the half, the Redbirds’ defense lost their footing and allowed the Bulldogs to pull out with a 10-point run.

Forward Liam Robbins was a catalyst in the paint, scoring 19 points. Having no one to match up with the 7-foot Robbins was fatal for the ’Birds.

The ’Birds return home for a 3 p.m. game with Loyola-Chicago on Sunday at Redbird Arena.