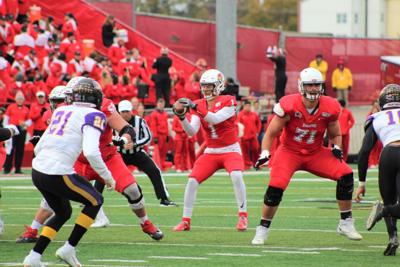 With the final weekend of the regular season approaching, the MVC sits atop the FCS National Polls. For the sixth time this season, four MVC teams are ranked in the top 10: North Dakota State (1), South Dakota State (5), Illinois State (6) and University of Northern Iowa (10). With Selection Sunday just around the corner, these teams are under a ton of pressure to succeed. Only the top eight seeds will receive a first-round bye in the playoffs.

· NDSU’s offense was on full display once again, putting up 49 or more points in three straight games. Left tackle Dillon Radunz was named MVC Offensive Lineman of the Week, his second honor in three weeks. The junior graded out at 100%, with eight knockdowns and no sacks allowed. Radunz helped the Bison’s offense average 10.0 yards per play, finishing the game with 33 first downs and 700 total yards. The team has now clinched the program’s ninth straight MVC Championship.

· SIU is ranked for the first time since November 2014 after coming out victorious in its fifth straight ball game. The offense was led by MVC Offensive Player of the Week running back D.J. Davis, who rushed for a career-high 208 yards on 31 carries against WIU. Davis ended the game averaging 6.7 yards per carry with two touchdowns. He is one of two SIU players to rush for 200 yards in a game in the past 10 years and only the second MVC running back this year with 200 yards in a game. Davis wasn’t the only running back on the team to get in on the fun. Freshman Javon Williams Jr continued to take this amazing opportunity and run with it, rushing for a career-high 149 yards and three touchdowns on 19 carries. The MVC co-Newcomer of the Week leads Division I freshmen and is seventh among the FCS in rushing touchdowns this season (16). The Salukis will have their toughest test of the year, playing against the undefeated Bison this Nov. 23.

Other MVC Awards this Week

· Evansville was named NABC (NCAA Division I) and March Madness (Andy Katz) Team of the Week for completing one of the biggest upsets in recent college basketball history. The Purple Aces held top-ranked Kentucky to just 37% shooting, putting themselves in the record books as just the 35th unranked team in NCAA history to beat a No. 1 ranked team on its home floor. Star forward DeAndre Williams came home with his second consecutive MVC Newcomer of the Week award this season. Williams ended the two-game week with a team-high 32 points, 17 rebounds and three steals in 54 minutes played, a promising start to the young sophomore’s season. His ability to trust the process during practice has led him to a rewarding start to the season. Williams has been making plays all over the court, resulting in a passionate victory over the top-ranked school in the nation. Evansville will play in the Islands of the Bahamas Showcase tournament Nov. 22.

After a nail-biting MVC Championship matchup, two teams have found their way into the NCAA Tournament (Nov. 21).

· Loyola stole a program-changing victory against MSU in its first MVC Championship title win, earning its way into the NCAA Tournament. Loyola’s win didn’t come without any advantages though, as the Ramblers were the host team of the tournament and had their fanbase behind them. A close battle throughout had everyone on the edge of their seats, with the Ramblers ending the game in a breathtaking 5-4 shootout victory in the seventh round of penalty kicks. This was just the third time in league history the MVC Tournament Championship went to penalty kicks. Loyola’s Aidan Megally took home the 2019 Missouri Valley Conference Men's Soccer Tournament MVP for his outstanding play and leadership during the playoffs. Billy Hency, Justin Sukow and Andrew Mitchell were also named to the All-Tournament team, an amazing accomplishment to add to their Loyola legacies.

· Loyola drew Kentucky for their fifth NCAA Tournament appearance. This will be the first time these two teams have met, with the Ramblers currently holding a 2-1 record against Conference-USA opponents. This will be head coach Neil Jones’s second NCAA Tournament with the team after leading it to its first NCAA Tournament in 2016. Whoever wins tonight will advance to the second round of the tournament to face the Indiana Hoosiers (5).

· MSU has snuck its way into the NCAA Tournament after its heartbreaking loss in the MVC Championship. The whole team watched on TV together as it drew Denver for the upcoming first round. This will be the Bear’s fourth NCAA Tournament appearance in school history and their first time hosting the match. The Bears will come out with something to prove after Loyola dashed their hopes of staying undefeated this year. Whoever wins tonight will go onto the second round of the tournament to face UCF.

After another weekend of conference matchups, the MVC continues to dominate the FCS National…