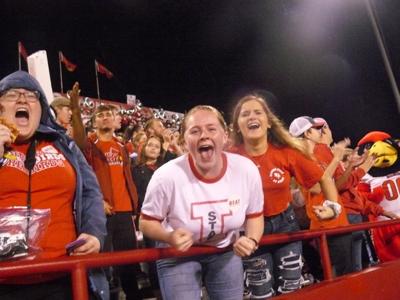 After another weekend of conference matchups, the Missouri Valley Conference is still atop the FCS National Polls. Four teams are ranked in the top-20: North Dakota State (1), South Dakota State (3), Illinois State University (7) and University of Northern Iowa (12).

UNI came into the third quarter determined this Oct. 19, outscoring the Coyotes 21-3 in the second half. The Panthers were stellar on both sides of the ball. The offense was once again led by MVC Offensive Player of the Week wide receiver Isaiah Weston, who continues to pile up the stat board. Weston put up a career-high 189 yards and three touchdowns, helping him stake his claim in the record books. Scoring in six consecutive games, Weston leads the MVC in both receiving touchdowns (8) and yards (699), while ranking second in the FCS in yards per reception (25.89).

He has a lot of the same characteristics and traits as Detroit Lion Kenny Golladay, who played at Northern Illinois University and has developed into one of the top receivers in the NFL. If he continues his high-level play, the 6’4sophomore has a bright future in professional football. The defense was led by MVC Defensive Player of the Week linebacker Chris Kolarevic, whose season was delayed due to injury. Kolarevic was wreaking havoc all over the field, ending the day with 19 tackles. His career day has him first in the MVC for tackles in a single game, one back of the FCS record this season.

SIU came out strong from the get-go, knocking formerly ranked Youngstown State University out of the FCS National Polls. The Salukis were piloted by MVC Newcomer of the Week running back Javon Williams. The local product is as dynamic as they come, becoming the first player in the university’s history to have a passing, rushing and receiving touchdown in the same game. Williams showed off his big-play ability with all three touchdowns going for over 40 yards, bringing his total to nine on the season. The Salukis also got some help from the third phase, special teams. Punter Jack Colquhoun came away with the MVC Special Teams Player of the Week award for both his accuracy and distance against the Penguins. Colquhoun averaged 43.5 yards per punt, with three of those punts longer than 50 yards and three inside Youngstown State’s own 20.

ESPN’s College Gameday is heading to South Dakota for the first time this weekend as the Dakota Marker game between South Dakota State University and North Dakota State University gets underway. College Gameday usually attends FBS games but have gone to two NDSU games in the past. This is a huge platform for the MVC to show both the talent and passion that this conference possesses. This rivalry between the No. 1 and No. 3ranked teams in the FCS was already a must-watch game. With College Gameday now confirmed, expect an MVC football classic with an electric atmosphere.

Bradley University has soaring-high expectations heading into the new year after its first March-Madness appearance in 13 seasons. Head coach Brian Wardle changed the culture of this program since 2015, taking them from last place to MVC champions. They became the first MVC team to start 0-5 on the season and reach the title game. Rewarded a March Madness bid, the Braves hung in the game with the Final Four-bound Michigan State Spartans until the end. With reigning MVC Outstanding Player of the Year Elijah Childs and scoring-leader Darrell Brown back at the helm, Bradley will try to take that next step and claw its way deeper into the NCAA Tournament. The Braves play Saint Joseph in their season opener on Nov. 5.

Former MVC players in the pros

With the NBA season kicking off this week, here is a player from the MVC who should get potential playing time this year.

Former Missouri State Bear Alize Johnson is currently in his second season with the Indiana Pacers. The 23-year-old power forward has shown spurts of promise throughout this NBA preseason, trying to prove his worth and earn playing time. Johnson came into the year with confidence and it was on full display in the Pacer’s second preseason game. He led the Pacers in both points and rebounds while showing his stretch-4 range with a heat check three. Johnson is raw, there’s no doubt about it, but the effort and potential are there.

Missouri State University’s perfect record was in jeopardy in a down-to-the-wire game against Bradley last Oct. 19.Greg Stratton came in clutch, scoring the game-winner in the 80th minute, moving the team up to number nine in the latest United Soccer Coaches Top25 Poll. MSU is the only undefeated team left in all Division I men's soccer. With their scoring offense ranked ninth and the defense allowing the second-fewest goals nationally, the Bears are playing like legit contenders. The team will look to break the program's all-time winning streak record of 12 straight victories in its homecoming game against Evansville Oct. 26.

Loyola’s Billy Hency is the Missouri Valley Conference Offensive Player of the Week for the first time in his young career. Loyola and UIC were tied 1-1 when Hency put in the game-winning goal in the first half. Hency has made big-time plays in big-time situations, sitting in the MVC top-10 for game-winners Oct. 23, Hency and the Ramblers will take on Drake Oct. 27 for Senior Day.

Drake’s Goalie, Luke Anderson, added to his outstanding year with a 2-0 shutout victory over Evansville, good enough for MVC Defensive Player of the Week. He now leads the MVC with six shutouts on the season. Anderson has the reflexes and skills to keep Drake close in key games for the remainder of the season.

Bradley’s Jake Hoffert was awarded MVC Cross Country Athlete of the Week for the fourth time of his career. In the most competitive meet in the country, Hoffert ended in 59th place out of 230 runners with a career-best 8K time of 24:22.1, good enough for eighth best in school history. Bradley is on track to once again compete for their fifth-straight MVC title.

Kalinowski: Senior midfielder Kate Del Fava's season is one for the books