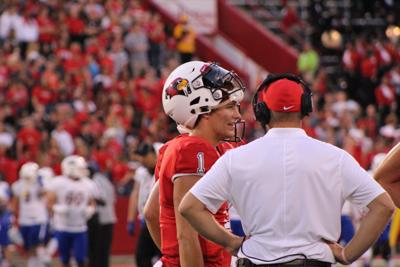 Drakahad a strong game totaling five tackles, four of which were solo tackles and three tackles for loss. Draka also forced a fumbled, broke a pass up and recovered two SDSU fumbles.

Senior kicker Sam Fenlason took home MVFC Special Teams Player of the Week award for his 4-for-4 performance against the Jackrabbits.

Fenlason earned his second Special Teams Player of the Week of the season. The senior kicker was four for four that included a career-long 46-yard field goal.

After last week’s loss to the University of Northern Iowa, the Illinois State University foo…

After a sloppy home loss to the University of Northern Iowa, Illinois State University footb…

After beating South Dakota State 27-18, Illinois State University has moved to No. 8 in the FCS Coaches poll after being ranked No. 12 coming …