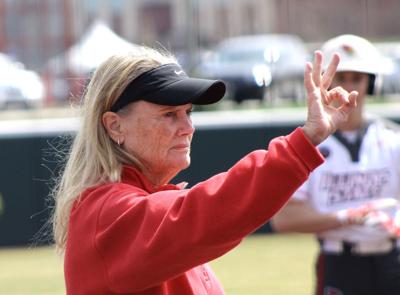 The Illinois State University softball team’s goal at the beginning of the season was to finish with a winning record. The Redbirds accomplished that goal, however not in the way that most thought they would.

The Redbirds were in the LSU Round Robin Tournament before the cancellation of all Division I softball games. They were 2-2 in the tournament so far, with their only losses coming against No. 5 ranked LSU on a back to back.

They responded with a convincing win against the Southern University Jaguars 7-3 on March 9. The win moved them to 3-2 in the tournament and took them one step closer to their goal of finishing with a winning record. On March 12, the NCAA officially announced that all softball tournaments would be canceled due to the threat of the coronavirus.

The Redbirds’ softball season ended with a 12-11 record on a cloudy 80-degree day in Baton Rouge, Louisiana. ISU head coach Melinda Fischer is still in shock about how quickly life has changed.

“It’s really surreal. It’s something that I’ve been doing for over 40 years, so every day of my life has been involved with going to work," Fischer said.

"Going to work is always fun because it involves doing what you love to do in terms of sports. So, it’s been a very hard adjustment for me just from a physical standpoint. From a mental, we’ve all been in and out of it once in a while just shaking your head is this really happening. Then you see all the coverage happening on the national news and on the state news and you realize this is for real and it’s so much bigger than anyone could imagine.”

Despite the abrupt end of the season, Fischer has still been able to keep herself and her players busy.

“A lot of paperwork, but we are starting skill instruction through video conferencing phone call. So, we’ll get on a conference call to talk about some drills they can do in a very limited period of time that can help them with their first base play and we’ll do that for every position.”

On the other hand, she feels this extended break could have a positive effect on the team.

“Anything is possible if you have the right mindset. So, we know moving forward that we have no more season, so our next opportunity to be together as a team will be in the fall," said Fischer.

"So, moving into the fall season we know that if we can sharpen our skills moving forward, from where we were, then I think we are going to be in good shape come September.”

“It’s just going to look different because it’s not the same people but different people, different roles, different expectation. As long as the comradery stays close, and the work ethic stays as intense as it was this year, they get committed for each other and work towards the goal then I think there’s every reason to work towards the same expectations as we did this season.”

For the past two plus weeks, Illinois State athletics has been put on hold, leaving some wit…

Illini's Cockburn declares for the NBA draft after his freshman season

Top of the mountain; Melinda Fischer's road to 1,104 victories

Very few people can say they have won 1,100 softball games. The Illinois State Redbirds Softball Head Coach Melinda Fischer is one of those fe…

With collegiate athletics on hold, head swimming coach Caitlin Hamilton has had to adapt to the environment. She provided a statement on how t…

NORMAL — Illinois State University men’s basketball head coach Dan Muller would normally be out on recruiting trips during the month of April.…