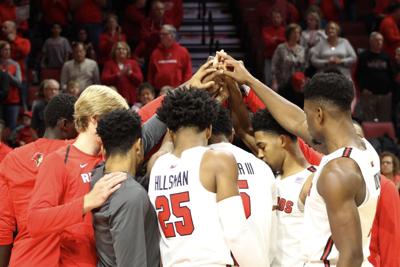 The Illinois State University men's basketball team host the Indiana State Sycamores 7 p.m. Feb. 8. Trying to gain momentum for Arch Madness, the Redbirds look to turn things around after a rough outing in Valley play. With that being said, here are five things to know before ISU's matchup with the Sycamores:

Getting hot at the right time

Although the Redbirds’ struggles have been evident this season, a place where they can never be counted out is at Redbird Arena. On the season, the Redbirds are 7-4 when playing in Normal. Throughout head coach Dan Muller's tenure at ISU, the team has gone 92-29 when at home.

DJ Horne and Abdou Ndiaye have taken leaps this season, and even with the poor season that the team has had, these two are standing out in the record books. Horne currently sits tied for first for three-point percentage by a freshman while shooting at least three field goals a game. Horne currently sits at 42% and is tied with Victor Williams, who set the mark in the 1998-1999 season.

Ndiaye is making his mark on the defensive end of the game, primarily the paint. Currently sitting sixth with 25 blocks on the season, passing Greg Dilligard in the game against Missouri State. Ndiaye trails LeRoy Watkins by eight blocks to move into the top five all-time, with seven games remaining.

Not only are the Redbirds hosting the Sycamores Feb. 8, but there are a litany of other events happening before tipoff. The annual Taste of Redbirds will be from 4-6:30 p.m. before the game begins at 7 p.m. All fans are welcomed as entrance to the Taste of Redbirds is free, although tickets must be purchased for food, soda or water. Tickets can be found on the east concourse of Horton Field House. Several food vendors will be present for Taste of Redbirds, and a Reggie's Kids Club Fun Zone will be present.

Before the game is underway, Jim Cornelison makes his way to Normal to sing the National Anthem to honor our country. The national anthem singer is well known for his electric tributes to our country as he is a regular performer for the Chicago Blackhawks, Chicago Bears and the Indy 500.

The game will be 7 p.m. at Redbird Arena. The game will be streamed on NBC Sports Chicago+. Vidette Sports Editors Jake Sermersheim and Jake Fogal will be live tweeting the game on Twitter from @Vidette_Sports.

We are now a little over halfway through Missouri Valley Conference play.

After ending their seven-game losing streak against Evansville on Wednesday, the Illinois St…

Preview: Redbirds look to make pivotal turn against UNI and Valparaiso this week