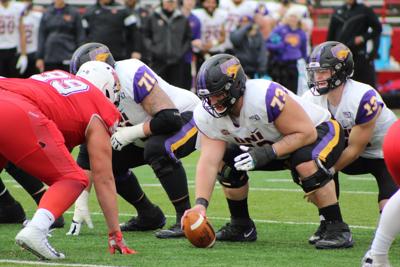 With a 24-14 win over the University of Central Arkansas, the Illinois State University football team will continue its strong playoff run taking on No. 1 North Dakota State. After losing to the Bison 37-3 at home Oct. 5, the Redbirds will travel to the Fargo Dome in Fargo North Dakota. Here are five things to know to get ready for the Redbirds semi-final FCS playoff matchup with NDSU;

The Bison have been downright dominant in this series. Facing off for the 13th time Saturday, the Bison hold a 10-2 record over the Redbirds. The last time the ’Birds took a game against the Bison was in back to back years in 2009-10. The two teams have met once before in the playoffs. In the 2014 FCS Championship, the Bison narrowly took a 29-27 come from behind victory. When the two teams faced off on Oct. 5 the Bison were able to capitalize on some mistakes from the ’Birds. An opening drive fumble turned into a 35-yard Trey Lance touchdown pass set the pace early. The Redbirds would score just three points off a Sam Fenlason field goal.

He came to eat

Senior running back James Robinson finished the regular season first in rushing yards (1,316) and second in rushing touchdowns (17). But Robinson is playing some of his best football of the season during the playoffs. Against SEMO, Robinson was truly unstoppable racking up 297 rushing yards and a touchdown. That mark set a career, ISU and Missouri Valley Football Conference playoff record. In the second round against UCA, Robinson continued his strong stretch rushing for 210 yards and a pair of touchdowns. Earlier this season against the Bison, Robinson rushed for 112 yards.

The Bryce is right

Freshman quarterback Bryce Jefferson has proved to be a solid fill-in after Brady Davis’ ACL tear. After struggling in the Redbirds final regular-season game of the year against Youngstown State, Jefferson has found his footing during the playoffs. While not playing at star level at quarterback, Jefferson has done enough to keep the ’Birds in games. Over two playoff games, Jefferson has thrown for 112 yards on 10-18 (55%) throwing. But the most important part of the equation for Jefferson has been not turning the ball over. After throwing two interceptions in limited action during the regular season, Jefferson has not thrown a pick in the playoffs.

Going on the road usually brings a disadvantage for the road team, but that is not the case for the Redbirds who have been road warriors this season. Finishing the season 6-2 on the road, the ’Birds notched four straight road wins after dropping the season opener at FBS Northern Illinois. The ’Birds did not lose another road game until the final regular-season game of the year at Youngstown State. The road warrior motto has stuck in the playoffs, as the ’Birds are perfect in two road games.

The game, which begins 11 a.m. Dec. 14 in Fargo, North Dakota, will be available to watch live on ESPN. Fans can also listen live on WJBC AM 1230/93.7 FM or follow along online at goredbirds.com. Sports Editors Jake Sermersheim and Jake Fogal will be live-tweeting the game from @Vidette_Sports on Twitter. Live tweets can also be found on ISU football’s Twitter page, @RedbirdFB, throughout the game.

After a brutal 21-3 loss to the Youngstown Penguins Nov. 23, Illinois State University footb…

The Illinois State Redbirds football team takes on the North Dakota State Bison in one of the marquee matchups for the FCS playoffs this weekend. The ’Birds are definitely underdogs heading into Fargo, North Dakota, as the Bison are not only the No. 1 seed in the playoffs, but they are also currently riding a 34-game win streak.

If the Redbirds can somehow pull off the biggest upset in recent FCS memory, they would move on to face the winner of No. 5 Montana State/Austin Peay who face off at 8 p.m. on Dec. 13.

If the favored Montana State Bobcats defeat Austin Peay, then the Redbirds would play at Montana State on Dec. 21. Although, if Austin Peay can pull out a victory over the Bobcats then the teams that reach the semifinals must submit a bid for home field advantage due to ISU and Austin Peay being both unranked teams.

ESPN coverage of the FCS playoffs

As Illinois State and No. 1 North Dakota State gear up to fight for a spot in the semifinals of the FCS playoffs, both teams will be spotlighted as the game will be streaming on ESPN.

The NCAA has made it more of a habit to feature FCS playoffs games on ESPN networks, as No. 2 James Madison/Northern Iowa and No. 3 Weber State/Montana will be featured on ESPN 2, while the No. 5 Montana State/ Austin Peay game will be available on ESPN 3. However, due to NDSU and ISU being the only FCS game to be scheduled on Dec. 14, the game can be watched on ESPN.

ESPN coverage for the FCS playoffs

As Illinois State and No. 1 North Dakota State gear up to fight for a spot in the semifinals of the FCS playoffs, both teams will be spotlight…