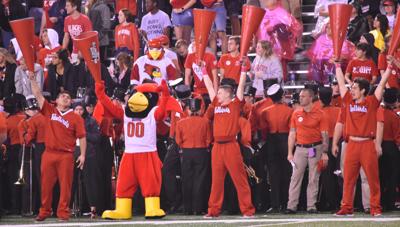 After taking down Indiana State 24-7 in a torrential downpour, No. 7 Illinois State football team hosts No. 9 the University of Northern Iowa in an FCS top 10 matchup at Hancock Stadium. Here are five things you need to know before the Redbirds and Panthers face off:

In 34 total contests, the Panthers lead the all-time series with a record of 21-13. But the Redbirds have flipped the script in recent contests, winning four of the last six matchups including three straight games at Hancock Stadium and 5-4 in the last nine games. Last time these teams met the Panther used a 16-point second quarter to take down ISU 26-16 at the UNI-Dome.

Widespread abuse has been reported among the Missouri Valley Football Conference defenders this season and there is a prime suspect in Normal. Blame senior ISU running back James Robinson for continuing to brutalize defenders with his aggressive tackle-breaking play.

Robinson continues to set the pace among MVFC running backs leading backs in touchdowns (14), rushing yards (924) and touches (177) keeping him in the conversation for the Walter Peyton Award. A pair of rushing touchdowns against Indiana State, gave Robinson his career-high beating his previous best 12 touchdowns from a season ago. He will most likely match of eclipse his mark of 1,290 rushing yards from a season ago.

So far this season the Panthers have had the hardest time in the FCS according to the Massey Rating. The Panthers have taken on three ranked opponents starting the season with a close triple-overtime loss to No. 21 Iowa State, followed by matchups with No. 1 North Dakota State, No. 5 Weber State and No. 18 Youngstown State, with the only win coming against Youngstown State.

While the Panthers have been dominating while at home (4-0) they have struggled away from home (1-3). This is a favorable matchup for the Redbirds who have historically dominated while at Hancock Stadium and have continued that tradition this season with a 3-1 record.

Since taking over as the Redbird’s head coach 11 seasons ago, Brock Spack has maintained his claim as one of the top coaches in the MFVC and Redbird history. After securing his 80th win over Indiana State, Spack continues to near Illinois State greatness as he is just six wins away from matching Edwin Stuck’s win record. Spack’s record of 80-47 ranks second all-time amongst Redbird coaches.

The game, which begins at noon Nov. 2 at Hancock Stadium, will be available to watch live on ESPN+ to paid subscribers. Fans can also listen live on WJBC AM 1230/93.7 FM or follow along online at goredbirds.com. Sports Editors Blaine Lewallen and Jake Sermersheim will be live tweeting the game from @Vidette_Sports on Twitter. Live tweets can also be found on ISU football’s Twitter page, @RedbirdFB, throughout the game.

Throughout the Illinois State football season, the receiving game has been a weakness for th…

With the 2019 season entering the homestretch, Illinois State University football has ironed…

Despite playing through constant rain, the Illinois State University football team was able …

After a sloppy home loss to the University of Northern Iowa, Illinois State University football travels to Brookings, South Dakota, to take on…

After last week’s loss to the University of Northern Iowa, the Illinois State University football team badly needed a road upset over No. 4 So…