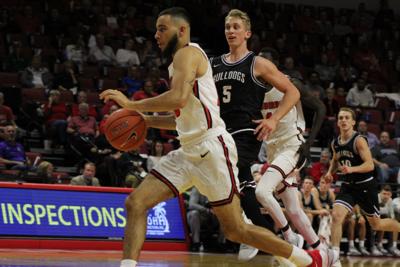 UPDATE: Former Illinois State University men’s basketball guard Lijah Donnelly has transferred to Lincoln College to become a Lynx. The Lynxes went 20-13 through the 2019-2020 season and reside in the NJCAA Division II level.

Verbal Commits is a well-known source for all Division I, II and III commits and transfers.

Donnelly played primarily a bench role for the Redbirds this past season where he averaged 1.1 points per game in 4.6 minutes of average playing time.

Before playing for Illinois State, Donnelly played for the University of Illinois at Springfield where as a sophomore he averaged 7.6 points per game and three assists per contest. Donnelly started in 13 games for UIS and poured in a season high 17 points against Rockhurst University.

Sermersheim: Longing for sports, what does future hold after COVID-19

April 2020 will always be remembered as a month without sports.

Longtime Illinois State University public address announcer Steve Adams passed away on May 8, at the age of 73, following a battle with pancre…

Illinois State University men's basketball adds forward Sy Chatman for the 2021-2022 season, from the University of Massachusetts. Chatman is …

Transfer Josiah Strong looking to build legacy as a Redbird

For a lot of Illinois State University’s winter and spring sports, spring 2020 remains a season of what-ifs, forever labeled as what could hav…