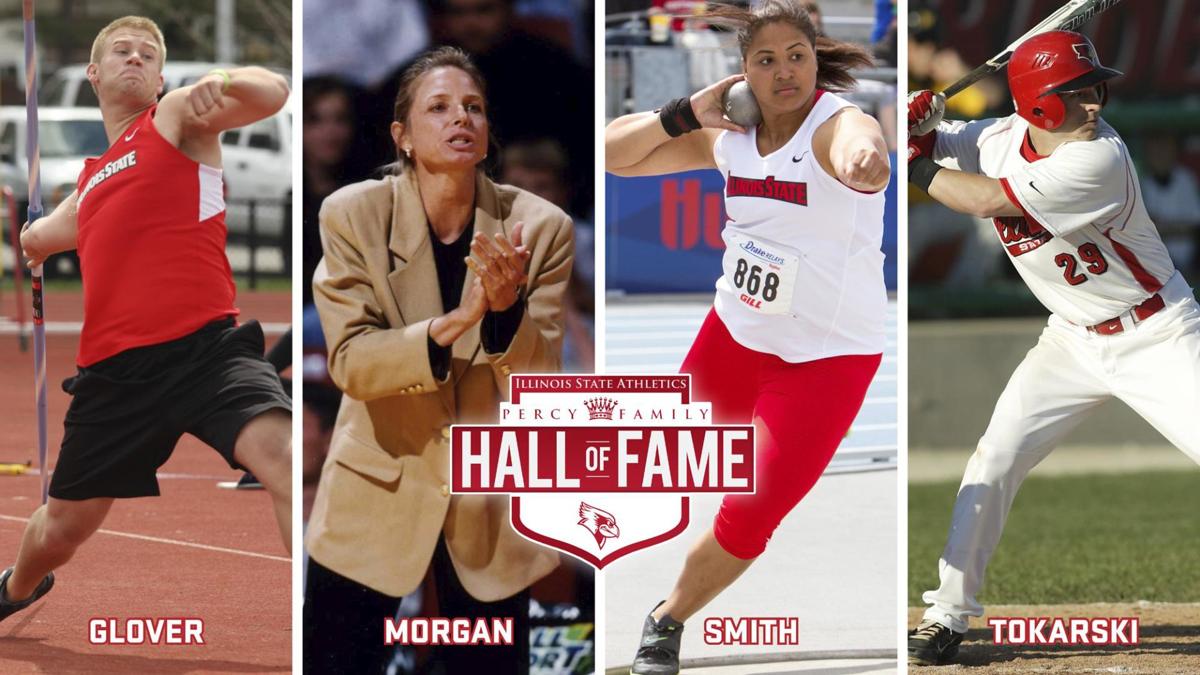 Tim Glover and Brittany Smith are two of four members being inducted into the Percy Family Hall of Fame Saturday, Oct. 13.

Two former stars of Illinois State's track and field teams, Brittany Smith and Tim Glover, will get to add another accolade to their already impressive list of accomplishments.

Smith and Glover have been selected as members to be inducted into the Illinois State Athletics Percy Family Hall of Fame. The pair boast some of the greatest individual performances in the history of the Redbird track and field program.

While a Redbird, Smith was a 10-time NCAA All-American, finishing runner-up four times.

For Smith, the question was never if she would be selected, but rather a matter of when.

“I didn’t expect it to happen this soon out of college,” Smith said. "So it was kind of shocking.”

Smith’s track and field journey started back in middle school.

“I was in basketball in middle school,” Smith said. “Some friends of mine were in track so I said I would do it to stay in shape for basketball.”

Her coach eventually convinced her to try her arm at the throwing events, and that is what started her on the path of success as an eventual Redbird.

“There is a lot that goes into the success. A lot of people don’t see what happens in the background,” Smith said.

On top of the physical struggles of working out, Smith dealt with depression.

“Us athletes struggle with stuff too, it’s not all roses, unicorns and rainbows or whatever,” Smith said. “There is a lot of other stuff that goes into it.”

For Smith, dealing with the highs and the lows was all a part of the process to finding her success.

She also attributed some of her success in college to working hard with a close group of teammates, a group that put ISU in display on the national stage.

“I was glad that Tim [Glover] and I were able to help… bring Illinois State to a higher limit.” Smith said.

Fellow teammate Tim Glover was just as excited to get the news that he had been selected.

“I was a little shocked, but at the same time I was very, very excited and still very humble to be a part of it,” Glover said.

Like Smith, Glover’s journey started when he was young. Glover started out only throwing the shot put and discus but was always more interested in baseball and golf. It was not until he was introduced to the javelin at a summer meet that his interests in track and field took off.

“I took a step back and realized that I had a higher chance of doing something in college in track than the other sports,” Glover said. “That swayed my decision to stop pursuing baseball and focused more on throwing the javelin.”

It did not take long for him to find success. In his first throw, during his first meet, Glover broke the school record that was previously held for 40 years — a record that was held by his father. That same year he made nationals, but for the first time ever he didn't make the finals in his career.

“That was a wakeup call,” Glover said. "I told myself that as long as I stayed healthy I would never feel that way again.”

That next year Glover would capture his first national title in the javelin.

“I went into the national meet my sophomore year with the mentality of it only takes one big throw … and I was fortunate to throw what I did,” Glover said.

Glover came back his junior year with only one goal in mind: to defend his title. He worked on getting more consistent throughout the season and successfully defended his title at the NCAA championships.

“At that time, I realized that javelin was something that I wanted to do after college," Glover said. "I wanted to be a professional track and field athlete.”

Glover focused his senior year on working on the technical aspects of his throwing to better set him up for a professional career. That year he placed runner-up at the national meet.

“I was planning for the future, not really worrying about what I was doing at the time,” Glover said. “The very next year, when I was done with my eligibility, my big throw of 84 meters was the best of my career.”

An elbow injury has kept Glover out of competitions for the past two years. Glover received surgery in the 2017 season and has been focused on recovery. He does not plan on sitting out much longer as the former Redbird has his eye on a very big prize.

“Sometime next April I am going to open up and see if I can give it a run for the 2019 world championships and ultimately the 2020 Olympic Games in Tokyo,” Glover said.

Tim Glover, Brittany Smith and other fellow inductees will be officially inducted into the Percy Family Hall of Fame at a breakfast ceremony at 8 a.m. Saturday Oct. 13 at the Hancock Stadium Club.

Becoming a Redbird was an easy choice for Kevin Tokarski, who joined the Illinois State base…

Along with her glorified tenure as Illinois State's head softball coach, Melinda Fischer can now add another accolade to her long list of acco…